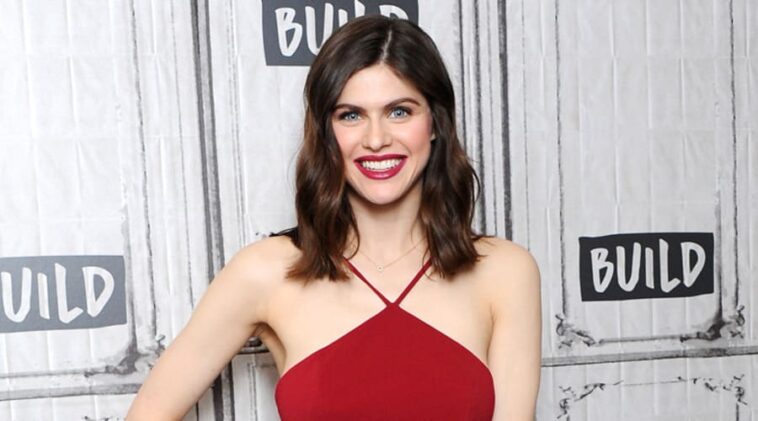 Alexandra Daddario is an American actress, renowned for her ethereal beauty and spectacular acting.

One of the notable roles she has played is Annabeth Chase from the Percy Jackson franchise.

Alexandra Daddario debuted as an actress when she was sixteen years old. She played exploited adolescent Laurie Lewis in the TV series All My Children (2002).

Her first significant role following her debut was when she played Annabeth Chase in the 2010 fantasy movie Percy Jackson & the Olympians: The Lightning Bolt.

Her first featuring role came three years later when she starred in the slasher movie Texas Chainsaw 3D. It was broadcast in 2013, albeit the shooting occurred nearly two years earlier.

That very year, she reprised her role as Annabeth Chase in the sequel movie Percy Jackson: Sea of Monsters, which immediately lifted her fame.

In 2014, She then showed up in the zombie horror comedy movie titled Burying the Ex alongside fellow actor and actress Anton Yelchin and Ashley Greene.

“I took Meisner for a long time. I use a lot of sense memory and, well, I wouldn’t say Method, but I can’t really avoid getting into character.”

“I’m a combination between extreme insecurity and extreme confidence.”

“You remember where you were doing each scene. ‘Oh my God, it was so hot that day.’ It’s kind of cool to see a movie that you haven’t seen in a long time and reflect on that stuff.”

“I do consider myself to be a smart, tough girl.”

“I’m a huge fan of Steve Martin. He’s hilarious, but he has this depth to him and this way of dealing with the difficult things in life with a sense of humor that I think has helped me as an actress.”

“When I was first starting out as a kid, I tried to pad my resume with everything I had ever done – ice-skate, carry a tune. I can’t dance for my life, but I can learn, so I’ll tell people I can dance. I play the piano – I’m a really good pianist, actually.”

“Boundaries move with time. It’s like being the oldest child. Your parents don’t know what to expect, but by the time the little sister comes along, it’s like, ‘Oh, staying out late with a boy – no big deal.'”

“I think I’ve learned not to take everything so seriously and just try to focus on the work the most.”

“Following your heart and working really, really hard is the best thing you can do, and just try not to be too hard on yourself.”

“I’m really easily affected by horror films. I have pretty strong reactions to them.”

“I love stories about people that, whatever situation they’re in, you can relate to them in a way.”

“I’m not afraid of falling and getting up the next day with a few bumps and bruises.”

“When I have no appointments, I spend the day in pajamas and go to the dog park in pajamas. I’m very casual.”

“Going to the darkest place you can to make yourself really upset and adding that with the physicality and running around, you can work yourself into hysteria that way.”

“I never even went to Jekyll & Hyde’s restaurant. I loved the Greenwich Village Halloween Parade, though.”

Despite her already impressive resume of acting, Alexandra Daddario still wants to explore as many roles as she can possibly try. She is truly a force to be reckoned with.