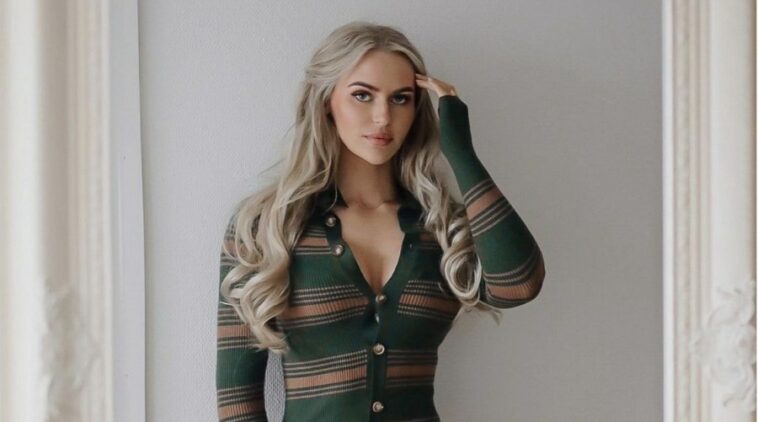 Anna Nystrom is a Swedish model, and Instagram star. She was famous on Instagram for her posts that inspire people to live healthier lives. She also a CEO of clothing brand Ryvelle.

In her early life, she wasn’t really exercising or eating healthy food. When she was in high school, she often went to parties and drank alcohol.

She then decided to turn her life around in 2013 by beginning to hit the gym. At first she took it slowly, as her body is still adapting to her exercising regularly.

She then fell in love with exercise and began to exercise harder. She was also determined to shape her figure the way she wanted it to look.

When she could get the body that she wanted, she began sharing her photos on Instagram and her attractive and curvy body began to attract people.

She began to be noticed by modeling scouts who invited her to attend photoshoots. It became her first photoshoot before she signed an exclusive contract with Swedish modeling agency.

She then appeared on the cover of several popular Swedish magazines and also in commercials for sport clothes and lingerie.

Anna Nystrom doesn’t share much about her personal information including her family details, but one things for sure, she dating a man named Ako Rahim.

The couple met through Tinder and through one date, the relationship blossomed until now. The couple share the same interest in workouts and often go to the gym together.

Sharing the same interest is the secret of their lasting relationship.

Anna shared that she intended to get married and have kids, though she has not detailed whether the couple has a plan for getting married.

Her net worth is estimated at $400,000. Since she has a long career awaiting her, it is possible that her wealth would rise in the near future.

“Thanks to the efforts and care of my loved ones, I felt that I was able to do fitness. With each trip to the gym, I became more confident and stronger”

“I have always been private and have never had any need to be in the center of attention or become famous. I have no need to make easy money or to be seen for that matter. I want to do things my way,”

“I had days when I was in so much pain that I struggled to get out of bed. I’ve always loved taking pictures, painting and anything that means creative. Therefore, it was natural for me to share this on Instagram, Nyström himself said on the blog.”

“I am very shy. I do not think people get that impression of my Instagram profile, but as soon as I stand in front of a camera to take something in, I get very shy. Being in the limelight is not exactly my thing, as she herself stated on the Youtube channel.”

Anna Nystrom takes her struggle with health as motivation to get healthy and began workout. Eventually, she falls in love with workouts and makes it as a way to make money.