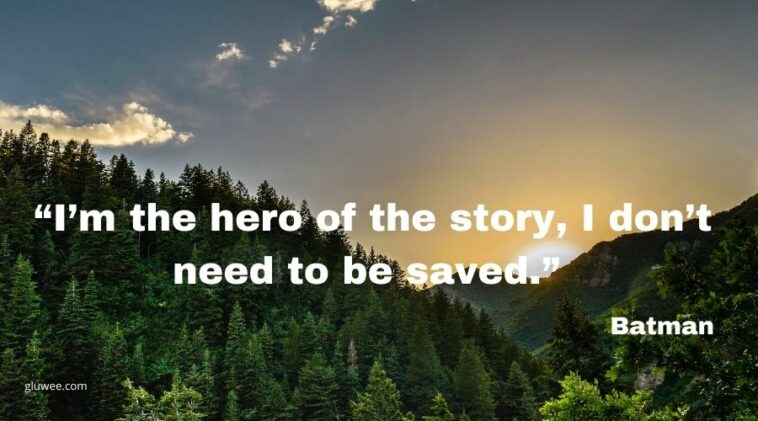 Batman Quotes – Batman, maybe for some of us this character is already familiar. Batman characters are widely cosplayed in almost every moment.

Batman is a fictional superhero created by artist Bob Kane and writer Bill Finger and originally published by DC Comics.

This character first appeared in Detective Comics in May 1939. Batman’s real identity is Bruce Wayne, a wealthy businessman.

The name Bruce Wayne itself is taken from the names of historical figures, namely Robert the Bruce and Anthony Wayne.

Batman became a famous character quickly after being introduced in Detective Comics for the first time, and finally released a comic with the title Batman.

After a decade of using the title, character differences have emerged. In the late 1960s, the Batman character in the television series was changed to a more aesthetic one over the years until the story was over.

For that, from the success of the movie, Batman won many awards and more attention from the public. one of them, a lot of dedication that comes from the figure of batman in the character of the movie, which will be discussed in the quotes below.

Here are 120 inspirational batman quotes about famous superheroes that can be learned and motivated by them.

Batman Quotes About Super Powers And Meaning In Life 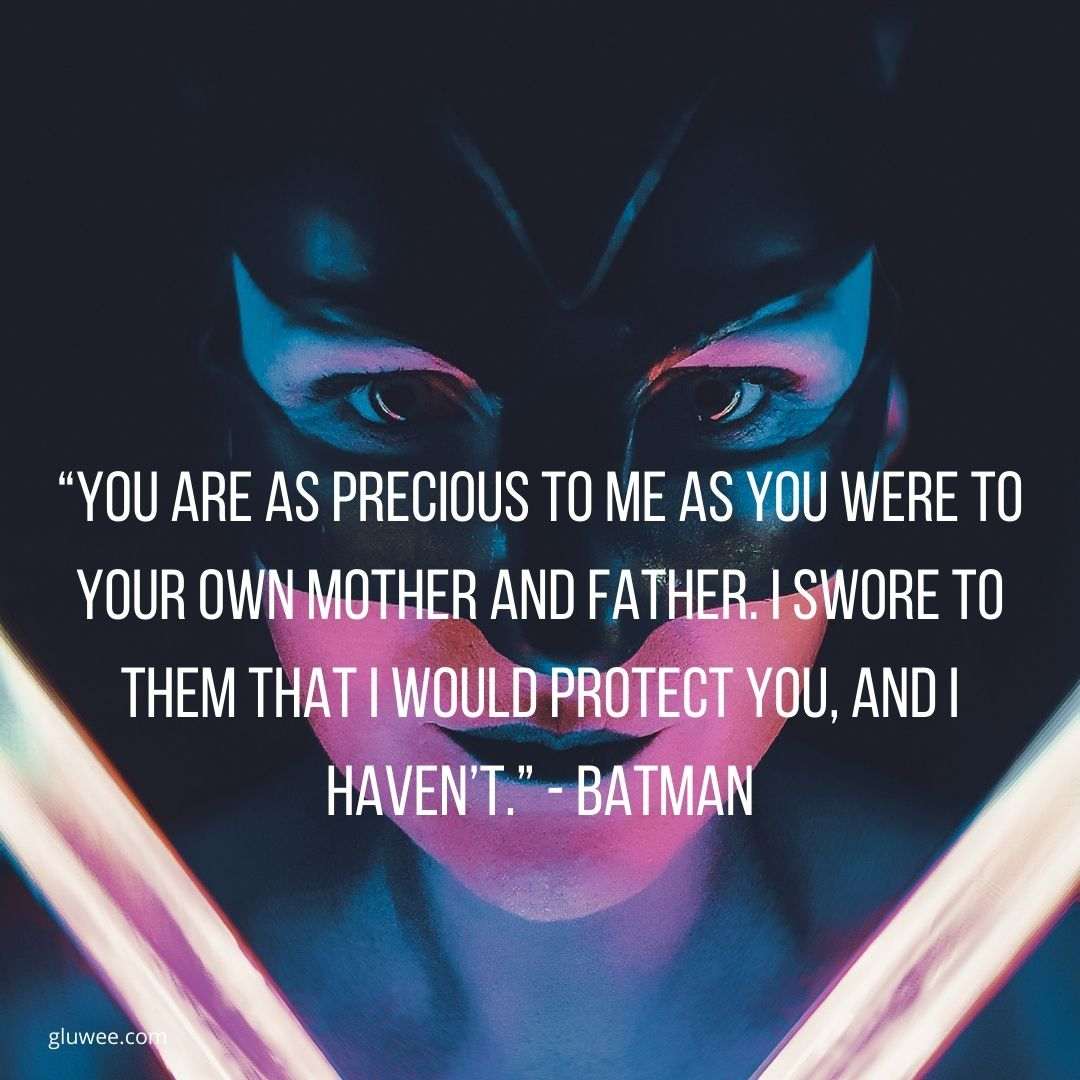 2. “You don’t get heaven or hell. Do you know the only reward you get for being Batman? You get to be Batman.” – Batman

3. “You are as precious to me as you were to your own mother and father. I swore to them that I would protect you, and I haven’t.” – Batman

6. “Ladies. Gentlemen. You have eaten well. You’ve eaten Gotham’s wealth. Its spirit. Your feast is nearly over. From this moment on…none of you are safe.” – Batman

7. “Sometimes it’s only madness that makes us what we are.” – Batman

8. “If you can carry it to the top of the mountain you may find what you were looking for in the first place.” – Batman

10. “I don’t blend in at a family picnic.” – Bruce Wayne/Batman, Batman Forever

11. “You think darkness is your ally.” – Bane, The Dark Knight Rises

13. “It is the duty of every good citizen of Gotham City to report meeting a man from Mars in a public park.” – Bruce Wayne/Batman, Batman (TV series)

15. “The pen is truly mightier than the sword!” – The Joker, Batman

17. “I am Catwoman. Hear me roar.” – Selina Kyle/Catwoman, Batman Returns

19. “I see without seeing. To me, darkness is as clear as daylight. What am I?” – Bruce Wayne/Batman, Batman Forever 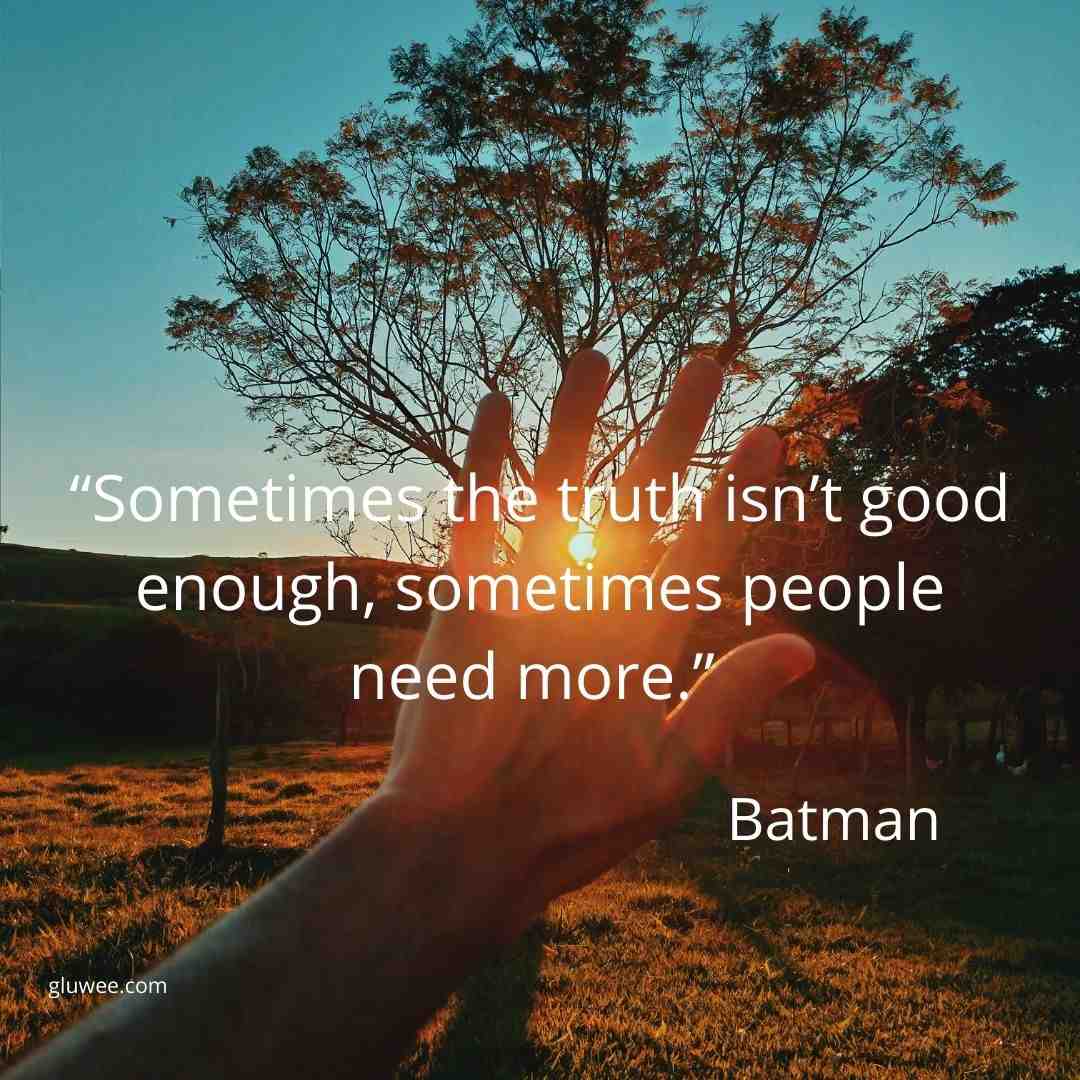 21. “As a man; I am flesh and blood; I can be ignored, I can be destroyed. But as a symbol, I can be incorruptible. I can be everlasting.” – Bruce Wayne, Batman Begins

24. “Not you, Robin. They have strict licensing laws in this country. A boy of your age is not allowed in a drinking tavern.” –  Bruce Wayne/Batman, Batman (TV series)

25. “Madness, as you know, is a lot like gravity. All it takes is a little push.” – The Joker, The Dark Knight

27. “All it takes is one bad day to reduce the sanest man alive to lunacy. That’s how far the world is from where I am. Just one bad day.” – The Joker, The Killing Joke

29. “How can two people hate so much without knowing each other?” – Alan Moore, The Killing Joke

33. “The bat-signal is not a beeper.” – Bruce Wayne/Batman, Batman Forever

34. “A reporter’s lot is not easy, making exciting stories out of plain, average, ordinary people like Robin and me.” – Bruce Wayne/Batman, Batman (TV series)

35. “It’s obvious. Only a criminal would disguise himself as a licensed, bonded guard yet callously park in front of a fire hydrant.” – Bruce Wayne/Batman, Batman (TV series)

37. “All you care about is money. This city deserves a better class of criminal. And I’m gonna give it to them!” – The Joker, The Dark Knight

40. “Let that be a lesson. In the future, be more careful from who you accept free lemonade.”- Bruce Wayne/Batman, Batman (TV series) 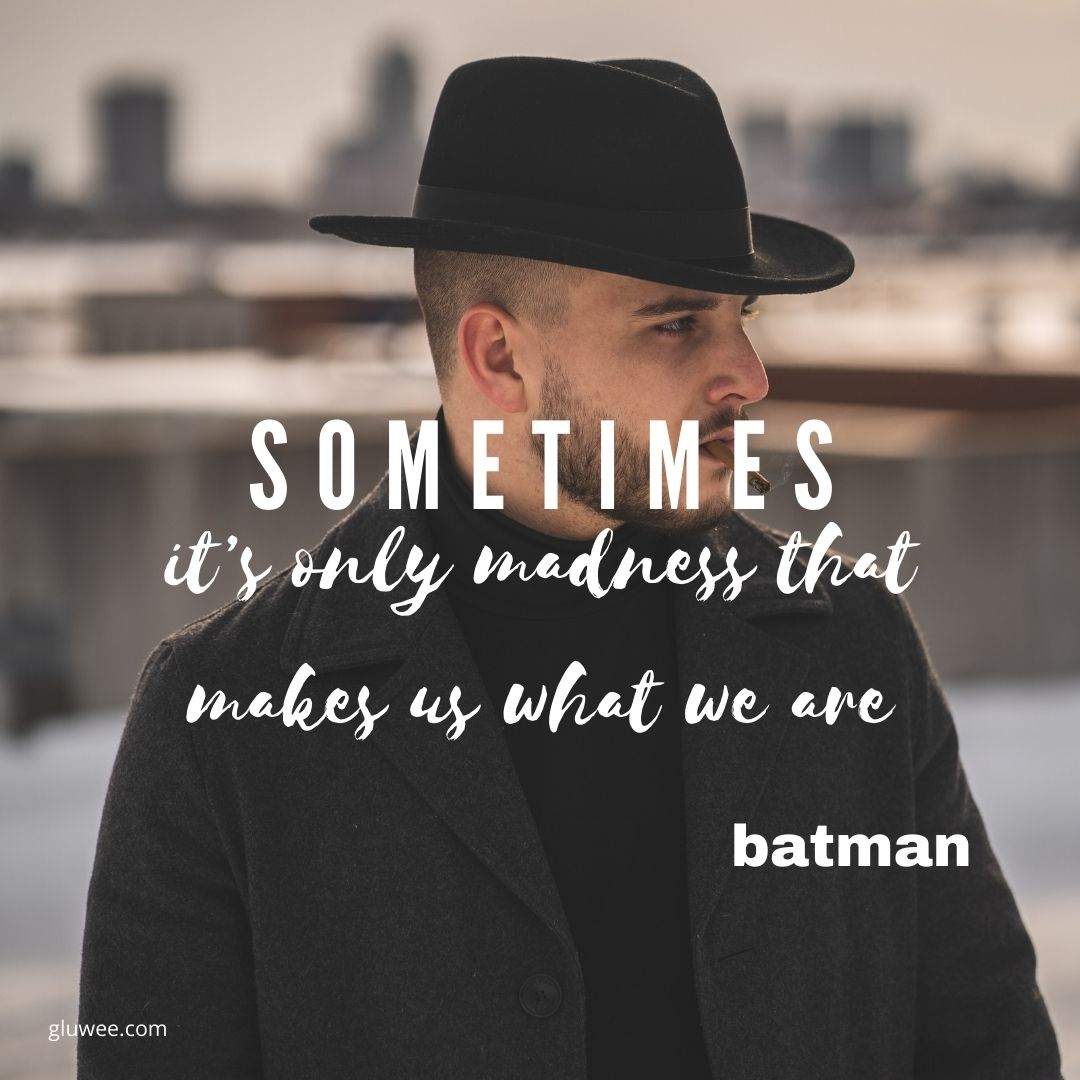 41. “For once I’m stuck without a punchline.” – The Joker, Batman: Mask of the Phantasm

43. “All men have limits. They learn what they are and learn not to exceed them. I ignore mine.” – Bruce Wayne/Batman, Knightfall

44. “I never said thank you.”… “And you’ll never have to.” – Commissioner Gordon and Bruce Wayne/Batman, Batman Begin

45. “All men have limits. They learn what they are and learn not to exceed them. I ignore mine.” – Batman

46. “If you can carry it to the top of the mountain you may find what you were looking for in the first place.” – Batman

47. “You always fear what you don’t understand” – Catwoman

49. “Criminals are like weeds, Alfred; pull one up, another grows in its place.” – Batman

50. “Criminals aren’t complicated, you just have to figure out what he’s after.” – Batman

51. “You care about justice? Look beyond your own pain.” – Rachel Dawes

52. “You cannot lead these men unless you are prepared to do what is necessary to defeat evil.”- Ra’s Al Ghul

55. “You finally learned to do what is necessary.” – Batman

56. “Can’t rely on anyone these days. You got to do everything yourself. Don’t we?” – The Joker

58. “Maybe it’s time we all stopped trying to outsmart the truth and just let it have its day.” – Alfred 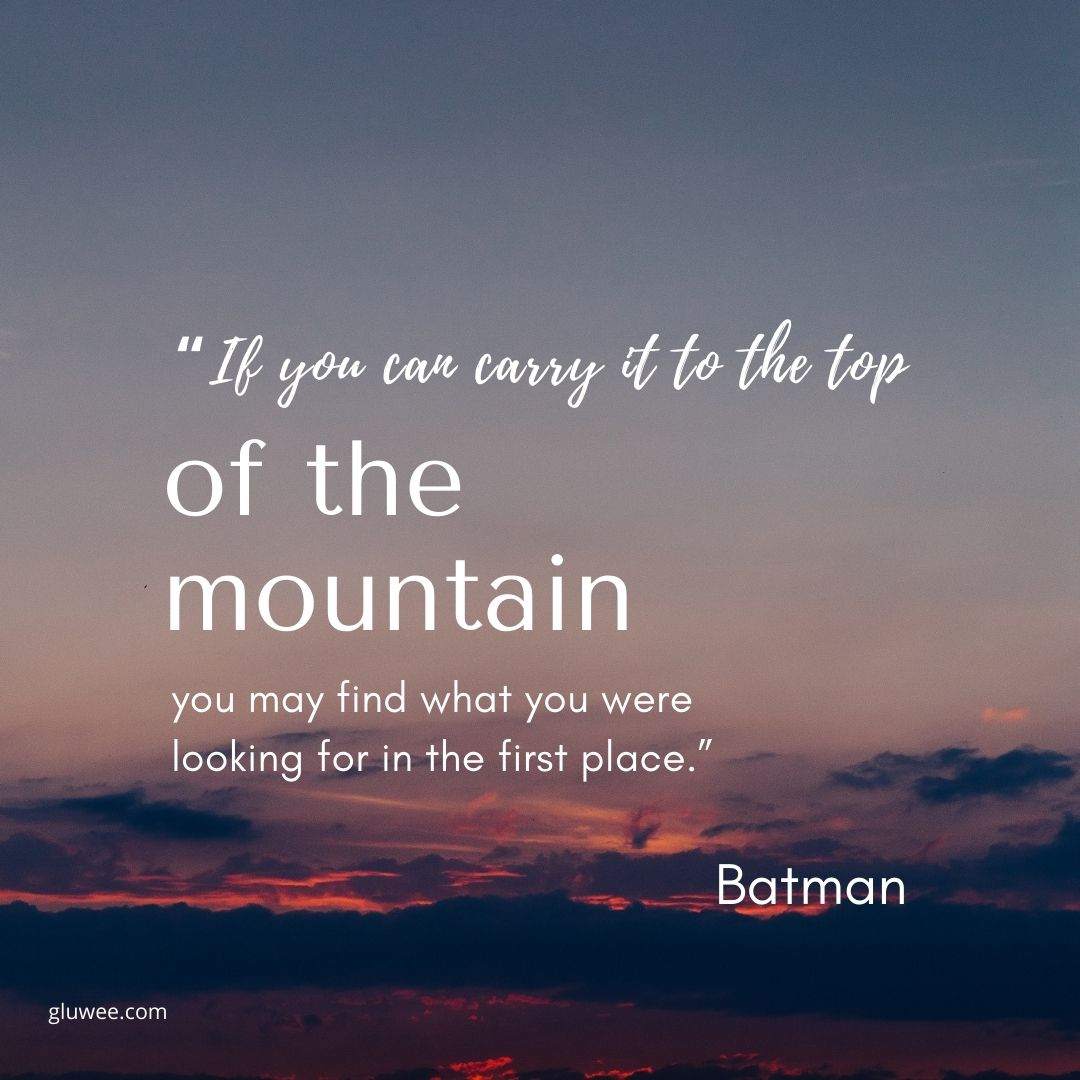 61. “When there’s no enemy within, the enemies outside can do you no harm.” – Batman

62. “Do not brood over your past mistakes and failures as they will only fill your mind with grief, regret, and depression. Do not repeat them in the future.” – Batman

64. “Oh yes, I was wondering what would break first, your spirit or your body? – Bane

66. “This is the world you’ll never understand.” – Catwoman

68. “You have to cross the line just to remember where it lays.” – Batman

69. “Never start with the head, the victim gets all fuzzy. He can’t feel the next.” – Batman

70. “There is a difference between you and me. We both looked into the abyss, but when it looked back at us… you blinked.” – Batman

72. . “I believe what doesn’t kill you simply makes you, stranger.” – The Joker, The Dark Knight

73. “Endure, Master Wayne. Take it. They’ll hate you for it, but that’s the point of Batman, he can be the outcast. He can make the choice that no one else can make, the right choice.” – Alfred Pennyworth, The Dark Knight

74. “It’s not who I am underneath, but what I do that defines me. ” – Bruce Wayne/Batman, Batman Begins

75. “The world only makes sense if you force it to.” – Bruce Wayne/Batman, The Dark Knight Returns

77. “Criminals, by nature, are a cowardly and superstitious lot.” – Bruce Wayne/Batman, Batman: Hush

76. “Your anger gives you great power. But if you let it, it will destroy you… As it almost did me.” – Henri Ducard, Batman Begins

77. “You either die a hero or live long enough to see yourself become the villain.” – Harvey Dent, The Dark Knight

79. “Have you ever danced with the Devil in the pale moonlight?” – The Joker, Batman 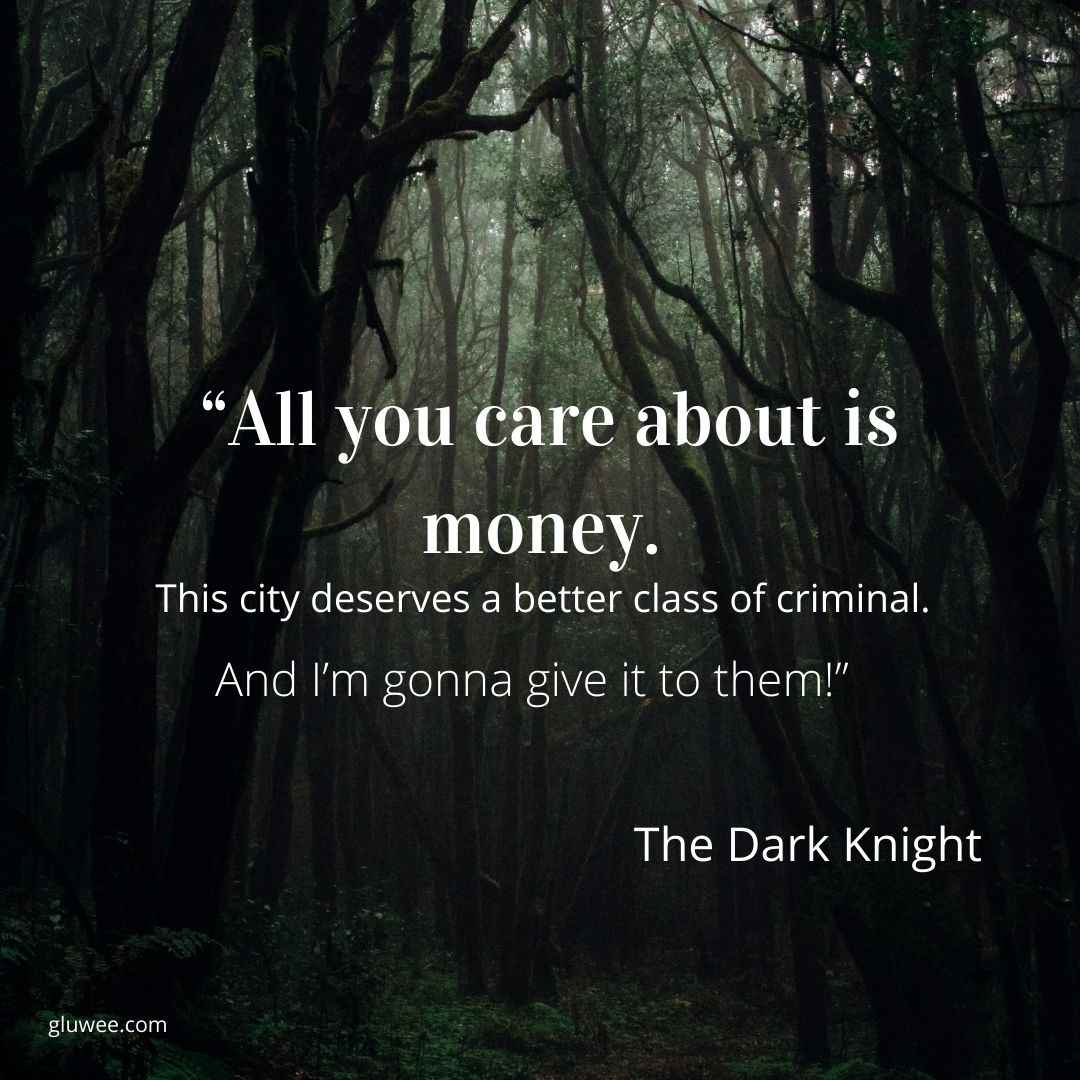 81. “If you make yourself more than just a man, if you devote yourself to an ideal, and if they can’t stop you, then you become something else entirely… Legend, Mr. Wayne.” – Henri Ducard, Batman Begins

82. “I am vengeance. I am the night. I am Batman.” – Bruce Wayne/Batman, Batman: Mask of the Phantasm

84. “You’re harder to kill than a cockroach on steroids!” – The Joker, Batman: Mask of the Phantasm

87. “Then I reminded myself that all intelligent children suffer bad dreams.” – Batman

88. “Our greatest glory is not in ever falling, but in rising every time we fall.” – Batman

89. “A hero can be anyone, even a man doing something as simple as reassuring putting a coat on a young boy’s shoulders.” – Batman

90. “Everything’s impossible until somebody does it.” – Batman

91. “If you kill a killer, the number of killers in the room remains the same.” – Batman

92. “All men have limits. They learn what they are and learn not to exceed them. I ignore mine.” – Batman

93. “Never start with the head, the victim gets all fuzzy. He can’t feel the next.” – Batman

94. “There is a difference between you and me. We both looked into the abyss, but when it looked back at us… you blinked.” – Batman

96. “You are not talking about justice. You’re talking about revenge. No, they are never the same. Justice is about harmony. Revenge is about you making yourself feel better, which is why we have an impartial system.” – Rachel Dawes

97. “If you make yourself more than just a man. If you devote yourself to an ideal. You’ll become something else entirely. A legend.” – Henri Ducard

99. “Why do we fall, sir? So we might learn to pick ourselves up.” – Alfred Pennyworth

100. “When you hit rock bottom, it doesn’t mean you will stay at the bottom forever. You have to bounce back. However, it is your will to learn how to do it. No one can help you but yourself.” – Unknown 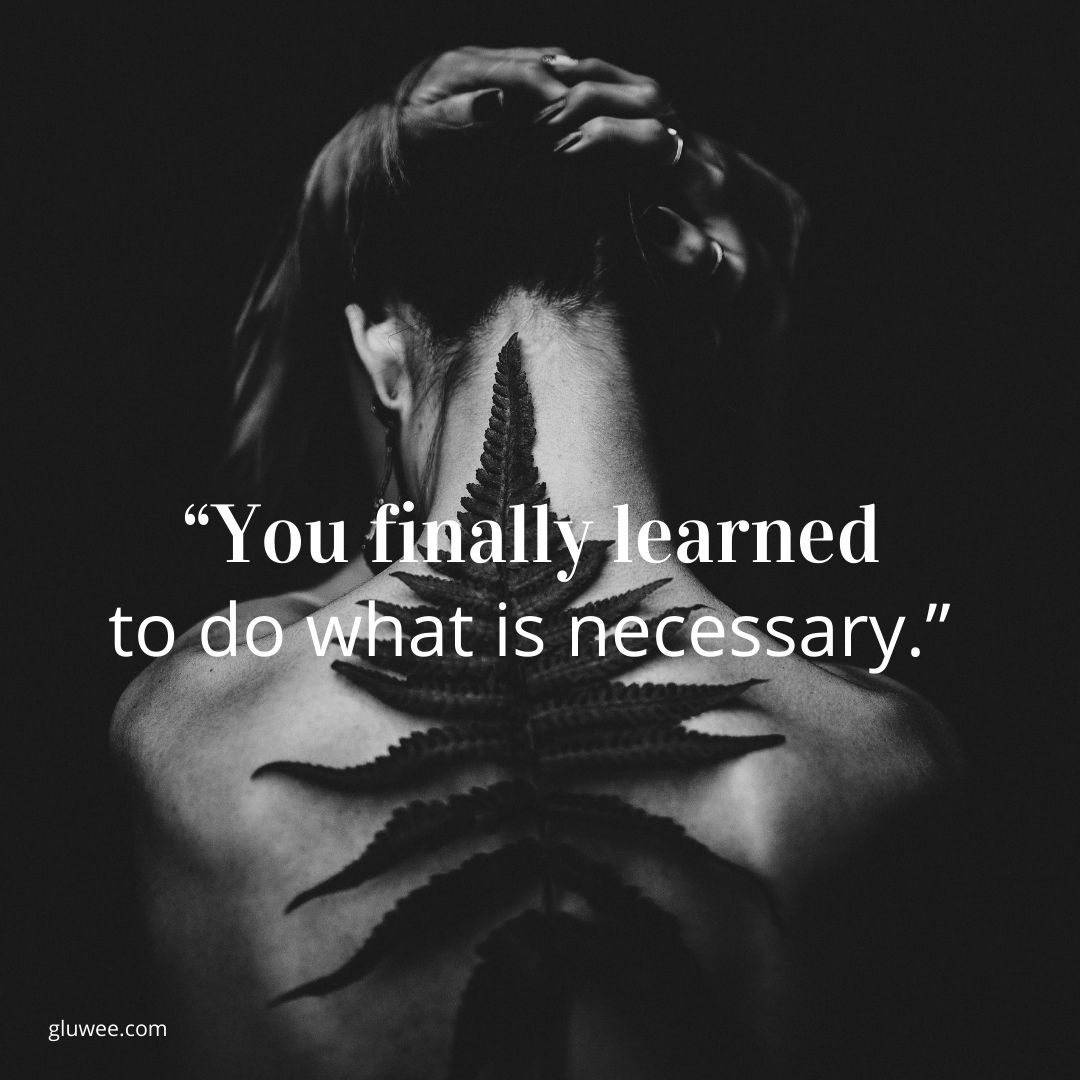 101. “Everything’s impossible until somebody does it.” – Batman

102. “Our greatest glory is not in ever falling, but in rising every time we fall.” – Batman

103. “Sometimes it’s only madness that makes us what we are.” – Batman

105. “We stopped checking for monsters under our bed when we realized they were inside us.” – The Joker

106. “You either die a hero or live long enough to see yourself become a villain.” – Batman

107. “The night is darkest just before the dawn, and I promise you, the dawn is coming.” – Harvey Dent

108. “The only sensible way to live in this world is without rules.” – Batman

109. “Whatever doesn’t kill you simply makes you stronger.” – Batman

111. “Within us, there’s a child that is still curious about how the world revolves. Not only that, just like Batman, as a child, he had some grudges, and that could be the same as you too. However, if you have some negative feelings from the past, it is best to let them go, or it will haunt you forever.” – Unknown

112. “You need to be aware of your surroundings.” – Henri Ducard

113. “You start pretending to have fun; you might even have a little by accident.” – Alfred Pennyworth

114. “Do not be all-serious with life. Have the bliss to enjoy it. Even when you thought it’s no fun, you will catch yourself smiling, even on stressful days.” – Unknown

115. “Your compassion is a weakness your enemies will not share.” – Henri Ducard

117. “A hero can be anyone, even a man doing something as simple as reassuring putting a coat on a young boy’s shoulder.” – Batman

118. “You don’t need superpowers to become a superhero.” – Batman

120. “Sometimes people deserve to have their faith rewarded.” – Batman

These are 120 Batman quotes about saving human life. I hope it inspires and gives meaning and learning for all of us who read.