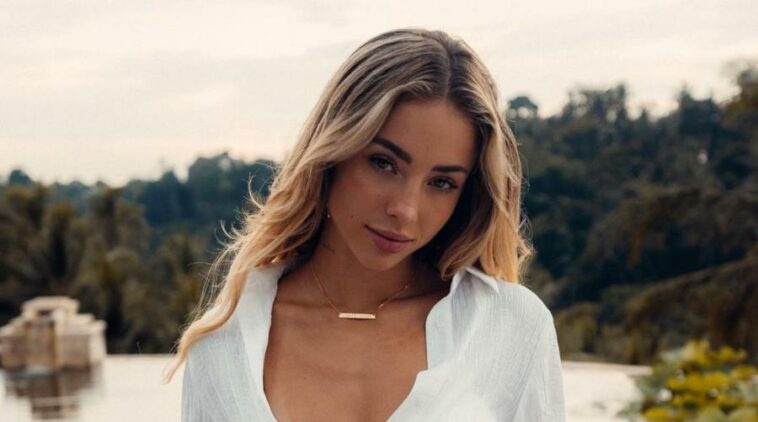 She is famous because of her hilarious videos she uploaded on social media, especially on TikTok. She often posts vlogs, make-up tutorials, and challenges on her social media.

Charly Jordan began her career by uploading video on TikTok. She uploaded hilarious videos on TikTok, which gained attention and went viral.

She also uploads photos of her modeling and about her lifestyle on her Instagram.

Before her career as a social media influencer, she took a career as an athlete. In her childhood, she was a football athlete and was on the football field for 12 years.

She didn’t continue her career as an athlete and was drafted off the field for personal reasons.

After a while, she began modeling for local brands. She moved to Los Angeles in her teenage years to become a professional model.

She has worked with several celebrity photographers and did her photoshoot with Zach Allia, and Rory Kramer.

She was the founder of SmokeRose, a brand that sells Organic Rose Petal Cones.

There’s no details about why they chose to split after being together for two years.

Charly Jordan has been known to be dating Tayler Holder. The couple started dating in 2020.

The relationship was made public because they both often posted photos of them together on Instagram and were making content of their relationship.

Since dating, they have been on and off and even in a break-up period in 2021. Apparently they’re back together, before they split again.

Charly Jordan and Harry Jowsey are rumored to be dating as they were seen kissing together in a club and spending some time together in New York City.

This rumor has been circulated since 2021 after they both spotted together in Dubai and model Sveta Bilyalova confirmed Charly and Harry’s relationship.

They frequently see each other, but Charly and Harry denied the rumor.

After previously being involved with several men, she currently chooses to enjoy her live as a single woman.

Her net worth is estimated at $1.5 million. All of her wealth she got from her modeling, her job as a DJ, and also from her business SmokeRoses.

“Social media has changed rapidly over time. As the times changed, I changed as well.”

“Music was always a passion of mine, especially being from Las Vegas. I’ve always been passionate about going to music festivals and seeing so many artist. I decided that I wanted to build something more long-term for myself.”

“I blew up on social media at a very young age, so it was cool to find what I was passionate about and share that with my audience as I’ve come into my own as an adult.”

“Such a big part of my job is being emotional and influential to other people.”

“You must make sure you’re taking care of yourself before you start to influence or take care of other people.”

“The respect and love the people I surround myself with drives my success.”

“I like people that are good at what they do and focus on that. We’re all good at what we do, and we’re all just there to support one another.”

“Having that mutual respect and understanding like we’re friends and if we can work together, for now, is great.”

Charly Jordan’s love for music makes her make her own music by being a DJ. Aside from being a DJ, she is also a famous social media influencer has collaborated as model for fashion brands.