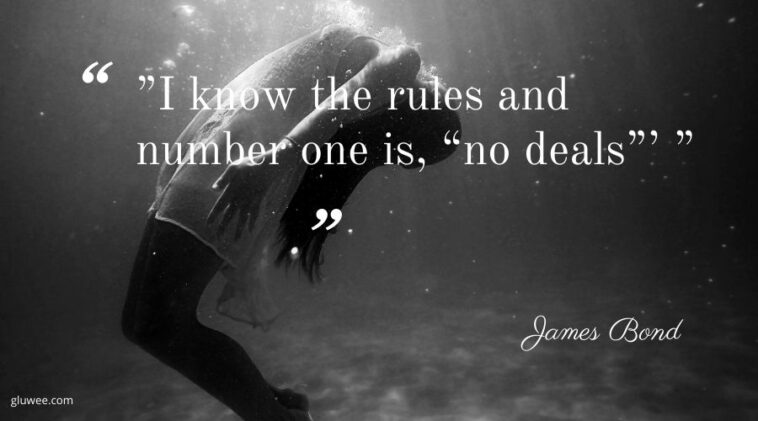 James Bond Quotes – Do you know about James Bond? James Bond, maybe some of you are already familiar with the figure of James Bond with his legendary action film.

This character was later used in the highest-grossing and most successful film media franchise worldwide to date, starting in 1962 in Dr. No.

There have been 24 films released and included in EON Productions’ “official” production series, the last and most recent to date being Specter, which was released on 26 October 2015 for the UK region.

In addition to the eon version, other producers are also trying to develop the James Bond story in several variations, namely in radio plays, comics, and video games.

Films produced by eon Productions are also referred to as official films, after the production rights were purchased by producer Harry Saltzman in the late 1950s.

As of the end of 2012, there have been 23 films produced by eon. The 21st film, Casino Royale, starring Daniel Craig, was released on November 14, 2006, with releases in Asia and the Middle East.

The James Bond film series is able to reap a profit of up to 5 billion dollars, or about 13 billion dollars when calculated including the overall inflation rate in various countries.

The 23rd film, titled Skyfall, which was released in the US on November 9, 2012, was able to gross around 1 billion US dollars, and this puts James Bond as the highest-grossing film in the world above Harry Potter, for now.

The success achieved by Skyfall made EON Productions move quickly to start working on the Bond 24 scenario.

Here are 50 James Bond Quotes that inspire and motivate us all in these following quotes.

James Bond Quotes From His Movies Which Give Motivating 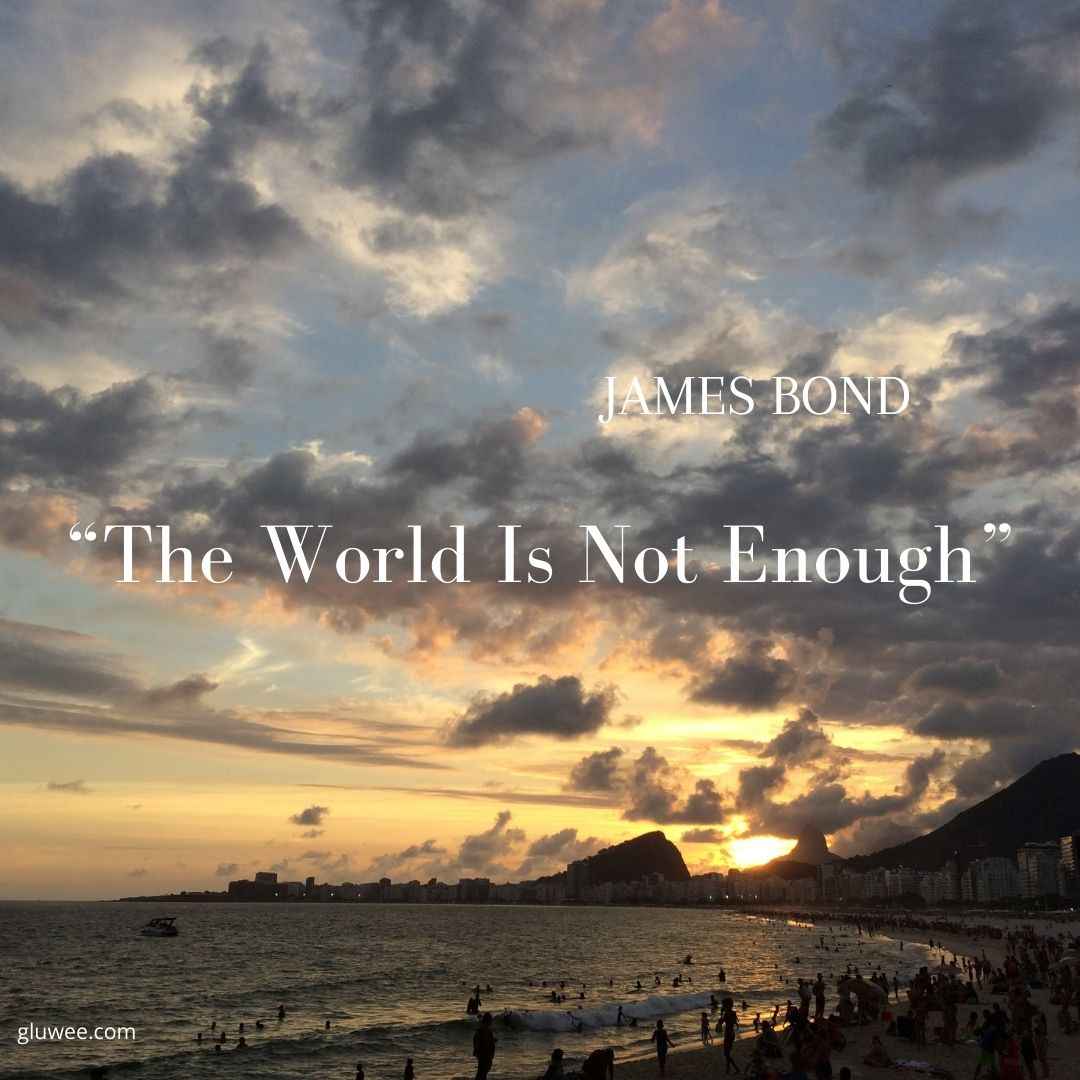 1. “Bear with me G-Harrison because this is going to be a long speech. I’ve always had this feeling that the world is not enough and I won’t be happy in life unless I hold hands with a girl who has a golden eye and a gold finger; I beat the living daylights out a guy called Dr No; I get a postcard from my friend who lives in Russia which reads ‘From Russia with love’; I spend some time working for her majesty’s secret service; I play the Thunderball Super Spud lottery; I meet a guy called Moonraker; I finally get a licence to kill, which I applied for months ago; I buy a house with a view to kill for and I get a pet octopus called Octopussy. If only I lived twice and tomorrow never died, maybe then I would get a chance to fulfil my dreams.”

2. “I have discussed this with him and he points out that the Rolex Oyster Perpetual weighs about six ounces and would appreciably slow up the use of his left hand in combat. His practice, in fact, is to use fairly cheap, expendable wrist watches on expanding metal bracelets which can be slipped forward over the thumb and used in the form of a knuckle-duster, either on the outside or the inside of the hand.”

3. “And then one day when you’re playing your little game you’ll suddenly find yourself pinned down like a butterfly.”

4. “I’ve found that one must try and teach people that there’s no top limit to disaster-that, so long as breath remains in your body, you’ve got accept the miseries of life. They will often seem infinite, insupportable. They are part of the human condition.”

5. “I was, in my own eyes, a veritable James Bond only younger, darker, and possibly better paid.”

6. “It is not just a question of blowing up a building or shooting a prime minister. Such bourgeois horseplay is not contemplated. Our operation must be delicate, refined and aimed at the heart of the Intelligence apparat of the West.”

7. “I’m getting very sorry for the Devil and his disciples such as the good Le Chiffre. The devil has a rotten time and I always like to be on the side of the underdog. We don’t give the poor chap a chance…the Devil had no prophets to write his Ten Commandments and no team of authors to write his biography.”

8. “Your on the planet too. Why should James Bond have all the action, fun, money, and resort hotel living.”

10. “Bond is now the Bond Girl of the opening credits. It’s his silhouette we see – and nary a dancing naked babe in sight. Perhaps to compensate for this, in the actual film he gets his tits out a lot. He emerges from the sea glistening, showing off his pumped boobs, like Ursula Andress in ‘Dr No’ ,save his nipples are more prominent. Bond has finally become his own Bond Girl.”

11. “Her breasts were showing and Mr. Player, who was a very strong Quaker, didn’t think that was quite proper.”

12. “If Fran Lebowitz and Ian Fleming had blessed the world with a love child it would have been author J. Fields Jr.”

13. “Wyatt Fox. It suited him. Clean, masculine, not a syllable wasted. Like James Bond, if 007 included cowboy marine-firefighter in his stable of personae.”

14. “Lovers lesson number two; togetherness ’till death do us part, or thereabouts.”

15. “I think he had a rather inflated opinion of himself.”

16. “A little restless, but I got off eventually.”

17. “Someone seems to have stuck a knife in my wallet.”

19. “The Chinese have a saying; ‘Before setting off on revenge, you first dig two graves!” 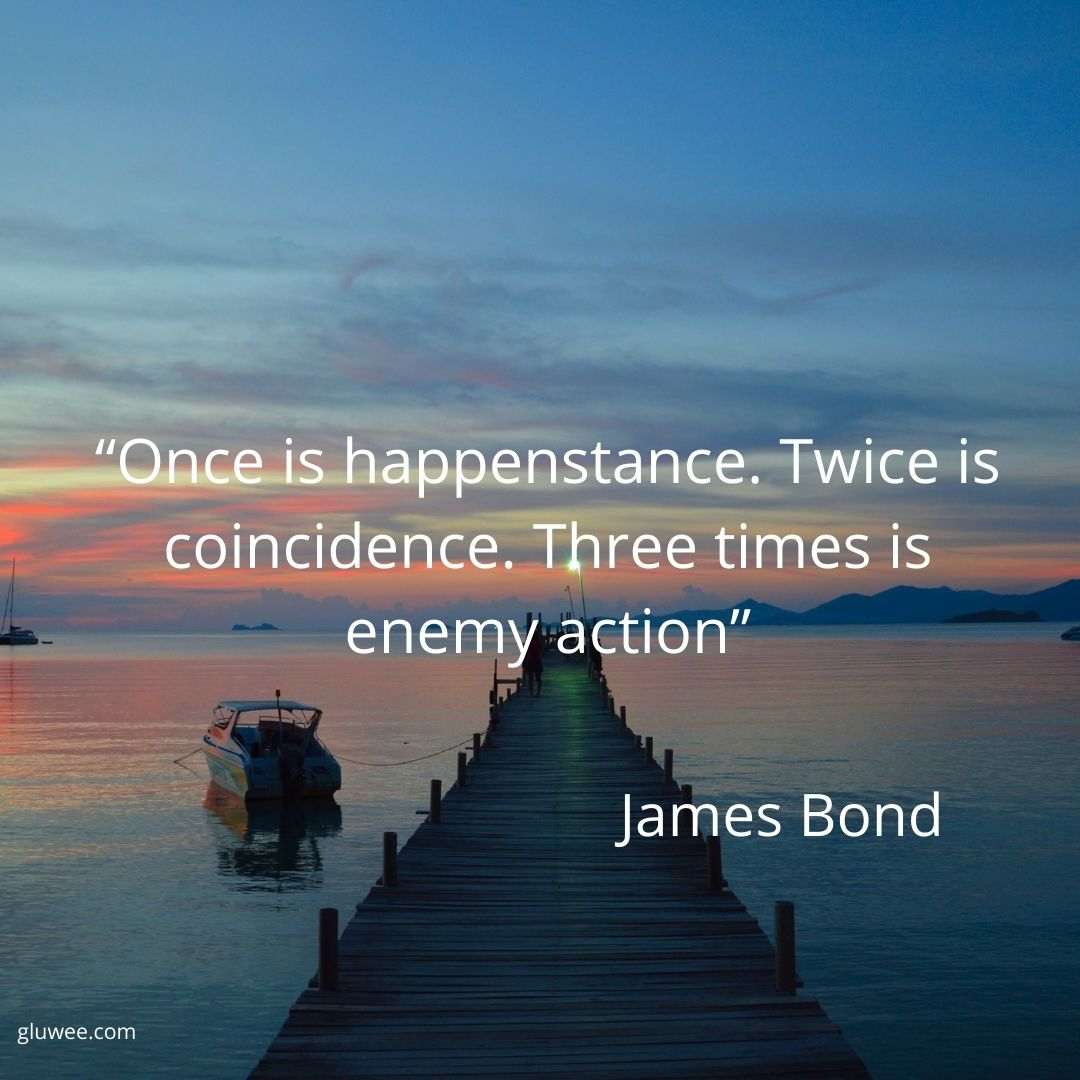 24. “I will be the first black James Bond. Dhani Jones”

26. “I’m not handsome enough to be James Bond. Maybe a villain, though. Matt Smith”

27. “In college, my friends called me Mr. James Bond 007 because I entertained everything: blonds, brunettes, redheads. I’m across the board.”

28. “It’s a good thing about George R.R. Martin: He’s prepared to kill off the main guys. You don’t get the feeling that the good guy is going to last forever, like James Bond.”

29. “I’ve always thought that there is a great female James Bond movie to be done. I’m not literally calling her Jane Bond, I mean, but a female secret agent.”

31. “I could get into bed with James Bond, then take my false leg off and it would really be a gun. Heather Mills”

33. “Movies always are open to being remade because times change so much, and the tempo of movies changes. I think of it like a James Bond. They can have different actors play the same role… I’ve had people come up to me and say, ‘We want to remake ‘The Jerk’ with so and so.’ And I say, ‘Fine.’ It just doesn’t bother me. It’s an honor actually.”

34. “My advice is this. For Christ’s sake, don’t write a book that is suitable for a kid of 12 years old, because the kids who read who are 12 years old are reading books for adults. I read all of the James Bond books when I was about 11, which was approximately the right time to read James Bond books. Terry Pratchett”

35. “My James Bond wasn’t any different to my Saint or my Persuaders or anything else I’ve done. I’ve just made everything that I play look like me and sound like me. Roger Moore”

36. “‘What? No small talk? No chit chat? That’s the trouble these days. Nobody takes the time to do a real sinister interrogation. It’s a lost art.’Bond, GoldenEye, 1995 ”

37. “Anytime I’m locked out of somewhere with another person, I can usually pick the lock successfully. And then I feel like James Bond. Kevin Morby”

38. “Austin sounds a little bit like Aston Martin, which is the type of car James Bond would drive. Mike Myers”

39.“I’ve already got the storm figured out. Some idiot blew up the sun. Some dumb Russian general pushed the wrong button and launched one of their million missiles, or maybe NASA misaimed one of our test rockets. Either way, the sun is gone and we’re now engaged in a nuclear shootout. It’s the end of everything. Batman and Superman aren’t coming and James Bond doesn’t have a trick up his sleeve to save us this time. In a week or a month, we’ll all freeze to death, just like in that Twilight Zone episode where the pretty lady is burning up with fever, dreaming the sun is baking the world dry, when really the Earth has dropped out of orbit, is hurtling further and further away from the sun, rapidly turning into a big ball of ice.” 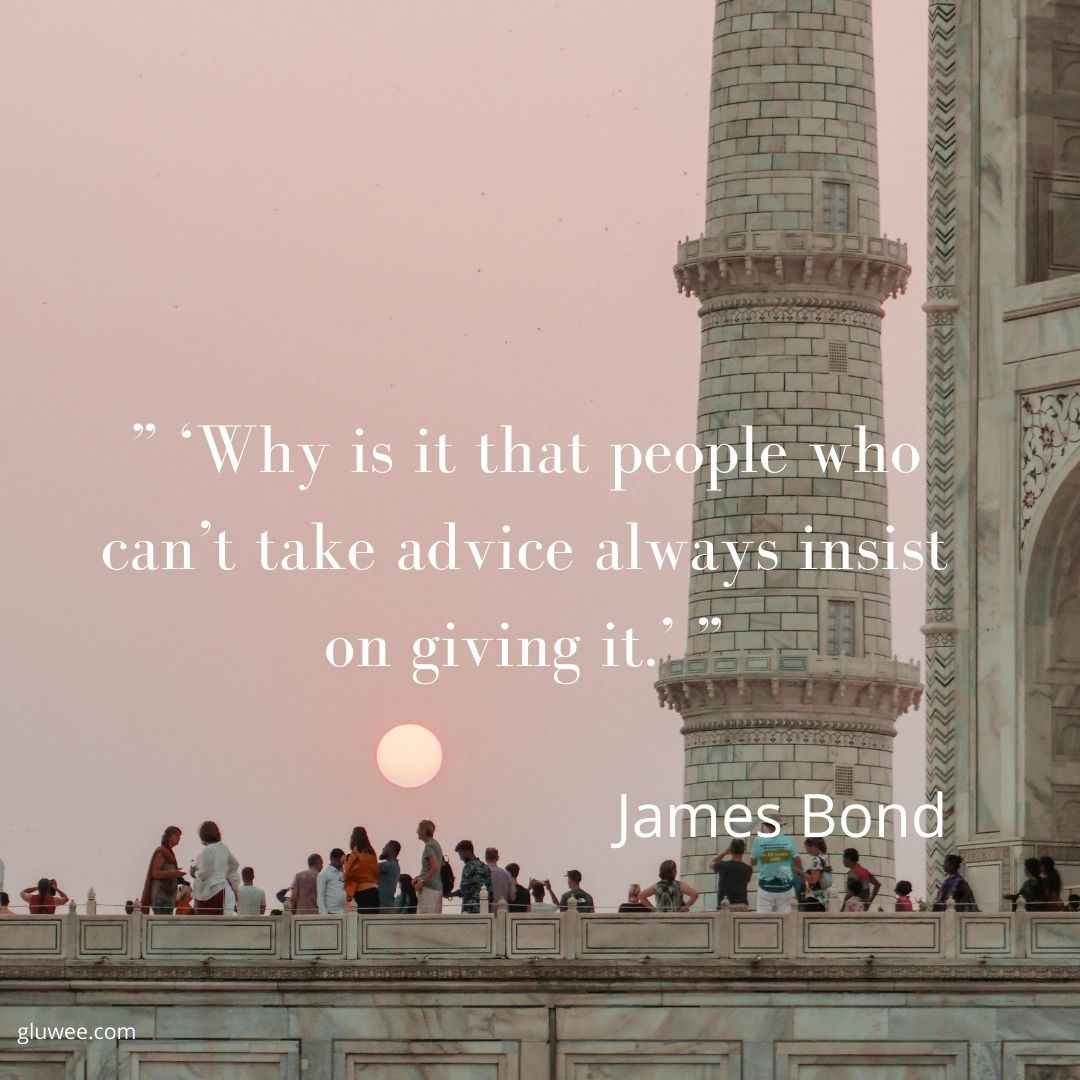 41. “The appeal of the paranormal bad boy or James Bond super-spy, as one example of male escapism – can sometimes make everyday problems seem less dire. Thus, a few hours spent immersed in the world of the wicked yet alluring hero is the equivalent of a mini-vacation.”

42. “When I was a kid, I wasn’t looking at the small-budget films myself. I was looking at ‘James Bond’ and all the major films, so I still have that energy. I still love those films. Mads Mikkelsen”

44. ”My dear girl, there are some things that just aren’t done, such as drinking Dom Perignon ’53 above the temperature of 38 degrees Fahrenheit. That’s just as bad as listening to the Beatles without earmuffs.”

45. ” ‘Why is it that people who can’t take advice always insist on giving it.”

46. “‘Codename Baboushka’ is an action-packed modern pulp spy thriller, in the sort of British tradition of ‘Modesty Blaise’, New Avengers and of course James Bond. It’s a book about Contessa Annika Malikova, the last of a noble Russian line and an enigmatic, mysterious figure in New York high society.”

47. “Once is happenstance. Twice is coincidence. Three times is enemy action”

48. “All the greatest men are maniacs. They are possessed by a mania which drives them forward towards thier goal. The great scientists, the philosophers, the religious leaders – all maniacs. What else but a blind singlenee of purpose could have given focus to thier genius, would have kept them in the groove of purpose. Mania … is as priceless as genius.”

50. “I think it’s the same with all the relationships between a man and a woman. They can survive anything so long as some kind of basic humanity exists between the two people. When all kindness has gone, when one person obviously and sincerely doesn’t care if the other is alive or dead, then it’s just no good.”

Read also: 60 Sex In The City Quotes Give Us Inspiration About Love

These are 50 James Bond quotes that inspire and provide new space for all of us that we can take meaning and learn from.