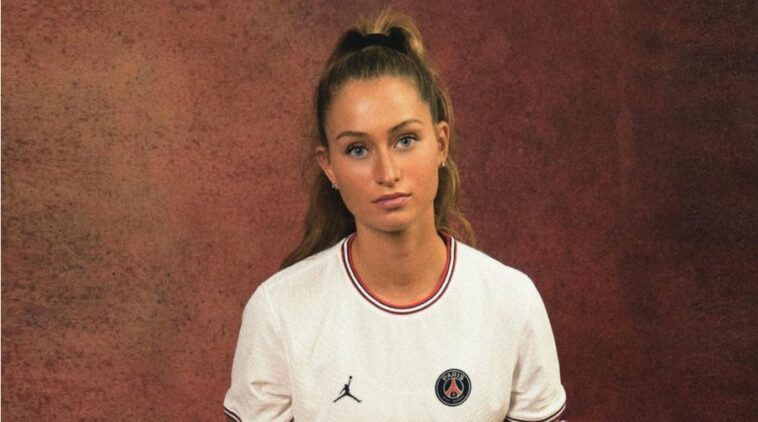 Jordyn Huitema used to play football in the backyard along with her brothers. Though it was just a child’s play, from when she played with her brothers, she could build up power and technique.

When she was 4, she started to play for the local team Chiliwack FC. She joined the boys team when she was 10 because, according to her, the girls team wasn’t competitive enough.

She attended middle school at the Rosedale Middle School in Chilliwack and attended Burnaby Central Secondary as a part of the Whitecaps FC Girls Elite REX program.

Her career began when she joined TSS FC Rovers of the Women’s Premier Soccer League in the 2018 season.

In the same year, she announced that she would play for Paris Saint-Germain Feminines during the 2018 Women’s International Champions Cup but didn’t sign a professional contract so she could maintain her college eligibility.

In 2019, she announced that she would forgo college and turned pro, thus signing our year contract with Paris Saint-Germain.

She got called up for Canadian national team when she was 15. She became the first player on Canada’s U-17 team to score.

She is also part of the Canada senior team and makes her debut in 2017 at the 2017 Algarve Cup final in the matches between Canada and Spain.

She made her FIFA Women’s World Cup debut alongside the Canada team at the matches in France.

“I think the first thing I said to the team was, that’s my luck for 2020, i said that’s all of it right there that it came off the post and right back to my foot.”

“With me, really what you see is what you get.”

“If I feel passionate about something, I’ll post it. … It’s more just me leading by action and example.”

“I was just trying to show a different path, give different options. It’s not the only path for you. [I wanted to] put that mindset [out there] for kids.”

“If you’re not investing in women to devote themselves to the sport every day, day in and day out, they have to be half-minded because they have another job because they can’t afford to live … [then] what do you expect?”

Jordyn Huitema began football early when she was four. Though she’s going professional after graduation high school, she became the most Canadian female scorer.