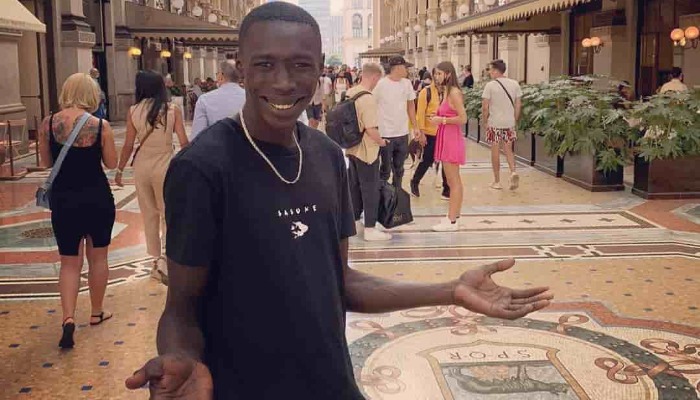 Khaby Lame is a Senegalese TikTok Star. He was famous after his funny TikTok videos of him mocking life hack videos got viral.

Khaby Lame first took to TikTok back in March 2020, at the beginning of Covid-19 pandemic. He just got laid off from his job as a factory worker in northern Italy.

His family urged him to find another job, but this Pisces man decided to be a TikTok creator instead.

He started uploading videos shortly after, using TikTok’s duet and stitch features. In the app, complicated “life hacks” videos are on the rise and Khaby capitalized on them.

He mocks these hacks by presenting an easier solution, then putting out his signature expression to the camera.

One of his most famous videos of him is peeling a banana. In the original video, someone showed a hack to open up a banana by using a knife.

The Senegalese responded to it by simply peeling off the skin. This clip has got over 200 million views.

While at first he used to speak Italian in the videos, his wordless yet expressive clips are the one that really launched his career.

His videos are simple and easy to understand by people all over the world. In 2021, Khaby became one of the most followed TikToker on the platform.

Khaby Lame and Zaira Nucci began dating in 2020. Nucci is an Italian Instagram star. The love stories between them began when Lame reacted to one of Nucci’s stories.

They began interacting on social media before deciding to start dating. Because they met during the pandemic, they couldn’t see each other too often.

When the lockdown restrictions in Italy were lifted, they were met in Chivasso, they place where both of them used to reside.

In the same year, they decided tp engage privately. However, in 2022, Nucci has made her account private and Lame only has one picture of them together, sparked rumor that they had parted ways.

Khaby Lame’s net worth is around $13 million. His main source of income was from TikTok. As the most followed person on TikTok in 2022, Charli D’Amelio, he could earn $750,000 for a single clip.

In 2022, it was reported by Fortune that he was making $10 million. While most of his income is from his TikTok clip, he also gets income from brand deals.

He a clip which includes one brand to promote, he could charge $400,000 each brand. Hugo Boss even paid him $450,000 to walk in Milan fashion week and post it online.

“Who is the real avenger.”

“Mine is better than yours”

“Please tell me it’s a joke”

“Please don’t do that with pizza”

“I just find myself happy with the simple things”

“I think that my hope is to influence not only people of color but everybody.”

“By staying silent, I am understood. Everybody can laugh alongside me.”

“Effort is important but knowing where to make an effort makes all the difference”.

“Everybody can make mistakes in life. Everybody should be forgiven for making mistakes.”

“I’m always traveling, and I love it. My family is very happy for me. Every now and then I take my brother traveling.”

“To create my content, I watch movies, listen to music, watch Japanese anime. Everything can be a source of inspiration to me.”

2. He has such bright smile

Khaby has reached massive success with his simple and entertaining videos. His videos never fail to put a smile on his viewer’s face. This TikTok star definitely deserves to become as big as he is.