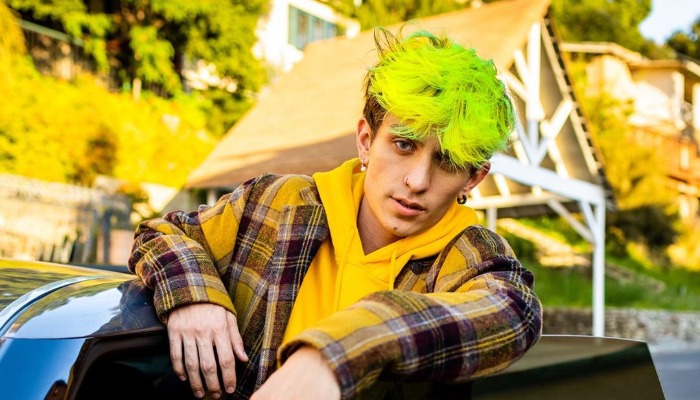 Marcus Olin has been passionate about social media. He then made a TikTok account and shared lip-sync and funny videos.

As he gained more popularity, Marcus made a YouTube channel named Marcus and Steph, along with his girlfriend, Stephanie Margarucci.

Their first video on YouTube was a Q&A session which was uploaded in September 2018.

They then often get featured in each other‘s TikTok accounts as well as made challenges and prank videos to each other.

He was invited to Famous Birthdays’ office in October 2019, along with her girlfriend and another TikTok star Anthony Chase, to play games Guest The Post and Guess Their Age. He also joined VidCon, a reputable online video conference.

Throughout Marcus’ social media career, he has collaborated with other TikTok celebrities, including Cody Orlove, Ona, and Neffati brothers (Jamel and Jamil).

He frequently partnered with Fashion Nova for Men for his outfit on social media.

1. His green neon hair contrasts with his all-black outfit

3. A more close-up look from the male TikTok star!

4. He matches the color of the car with his hair

Do you follow and adore Marcus Olin? His TikTok and Instagram accounts have brought attention to a wider audience.