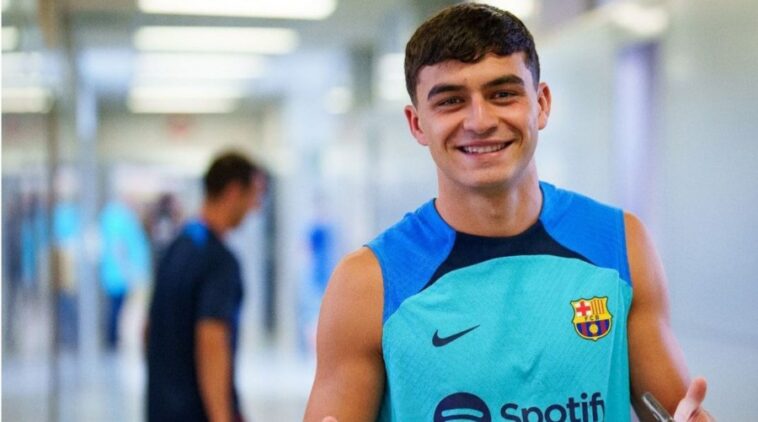 Born into a household that centers on their love for Barcelona, Pedri’s family’s love of football is like a fate. Pedri as a kid often has a conversation about football with his family especially his father. It is his father who introduced him to Michael Laudrup.

He then played for a local league, but felt frustrated because he didn’t get the opportunity to move to bigger academies.

When he was 13, he passed a trial in Juventus Laguna’s youth team which is a bigger academy in his homeland.

He improved his skills in the academy and his improvement led to him getting scouted by Las Palmas youth team.

He makes his professional debut with Las Palmas senior team in 2019 and became the youngest player in Las Palmas to score a goal.

While playing for Las Palmas, his name rose to fame and European clubs began to queue to sign him. He then choose Barcelona and transferred in 2020.

As a Spanish footballer, he also gets a chance to represent his nation. He gets called up to represent Spain in 2020 and makes his international debut the same year in U-21 squad.

In 2021, his senior international debut at the 2022 FIFA World Cup qualification against Greece.

“From day one he told me I had to work very hard because it is hard to stay at Barça. I’ve shown him that I am able to play here, and he has backed me by playing me in important games. I have to be grateful to him and keep working.”

“I was really happy to play in El Clasico. It’s a dream that you have as a kid since you see it on TV. I was lucky and I’m grateful to Koeman and my teammates for making it easy for me to play.”

“I’m enjoying it all, it’s a really nice sensation. You’re far from the people that love you, but I’m doing what I like, which is playing football.”

“When I came, I was a player who had been playing in the second division. I didn’t have as much experience and I came to acquire that as soon as possible, to try and stay here with effort and hard work.”

“It was quite special to see Messi in person, as it is with everyone. But as the days pass, he’s a normal guy and a friend in the dressing room. It’s great to play games, train and learn from the best player in the world.”

Born into a family who loves football has helped him pursue his dream since a kid to be a professional footballer.