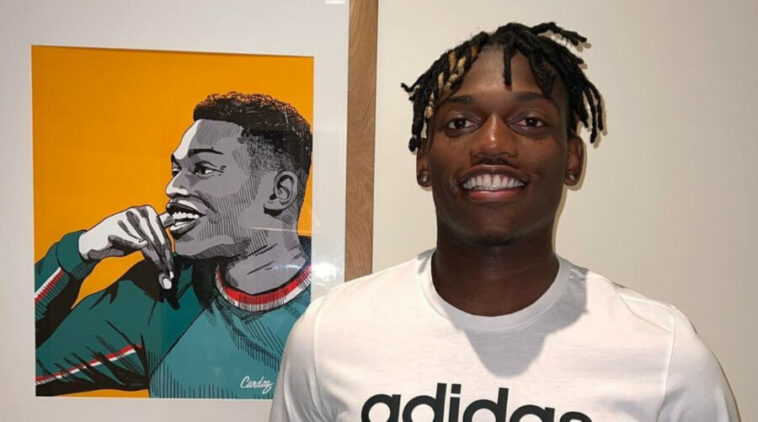 Rafael Leao grew up in the town of Almada. He got involved with football at a very young age.

He got addicted to football and would play it all the time. There’s a time when he only went home to get dinner.

At first, just like other kids, he went to school and pursued football at the same time. But he couldn’t focus on both and remained training football instead.

When he was 8, he was scouted by the president of Amora football club but only stayed with the club for three weeks because he got picked to join Benfica.

But some situations made him unable to join Benfica and joined Sporting CP’s youth system instead. His training paid off when he made his debut at the age of 17.

He makes his debut with Sporting CP in a match against Braga B as a substitute and scores in his debut.

His journey with Sporting CP didn’t come a long way after he terminated his contract because of an incident.

He joined Lille in August 2018, signing a five year contract with Lille. His signing with Lille comes with a problem because his former club, Sporting CP deeming the transfer unacceptable.

The problem is thus solved a month later and he makes his debut for Lille in a match against Olympique de Marseille.

In 2019, he got called up to join AC Milan and immediately agreed to it. He joined AC Milan and makes a record as the fastest goal in Serie A history.

As a Portuguese, he also takes a part in representing his nation. He is a part of Portugal’s U-17 team in the 2016 UEFA European Under-17 Championship.

He also played in the 2017 UEFA European Under-19 Championship and helped his team to get runner up in the tournament.

Rafael Leao made his senior debut in 2021, as a replacement for Rafa Silva and four days later, he replaced Cristiano Ronaldo and provided an assist for Andre Silva in a friendly match against Qatar.

“When I was younger I used to play ball every day. Sometimes I didn’t even get to lunch or snack from my parents.”

“I only came home at dinner time with dirty shorts. In fact, the new sneakers my father had bought were already being used.”

“I couldn’t keep focused on education because I was following a dream. In the middle of some classes I had to go out for training. I didn’t have the schooling life that most had.”

“In my first game, I discovered that street football was very different from academy football.”

“After all, when you grow up in a difficult neighbourhood it is like this, it is practically impossible to be seen: no one looks at you, no one wants to look at you,”

“Through what I do today, football, music, fashion, I want to show all the children in my neighbourhood and similar neighbourhoods that they can do it, regardless of their origins. One thing, however, is fundamental: we must never forget where we come from.”

“Football was my dream and, despite everything, my family managed to give me the tools to make it happen. They have always been by my side.”

“For this reason, now I want to give the opportunity to live peacefully, without worries, to those who shared those moments with me. And that’s why I always keep my feet firmly on the ground, because I know well that fame and success are fleeting, especially in football, where one moment you are the best and the next you are the worst. You need to have the right support and great mental consistency.”

“In any case, music will continue to be a pleasure and a moment of sharing with my historical friends, I don’t live it and I will not live it with the intention of earning money. It is not a job. For my brand, however, the situation is different.”

“The first two years at Milan were difficult, I came from France, where everything was smaller and life was very different. When you arrive at Milan you know that you have to be a winner, that many legends have worn the same shirt as you, winning many trophies,”

Rafael Leao’s addiction to football has made him chase the dream he wanted and with the help of his parents, he could become one of the important players for his country.