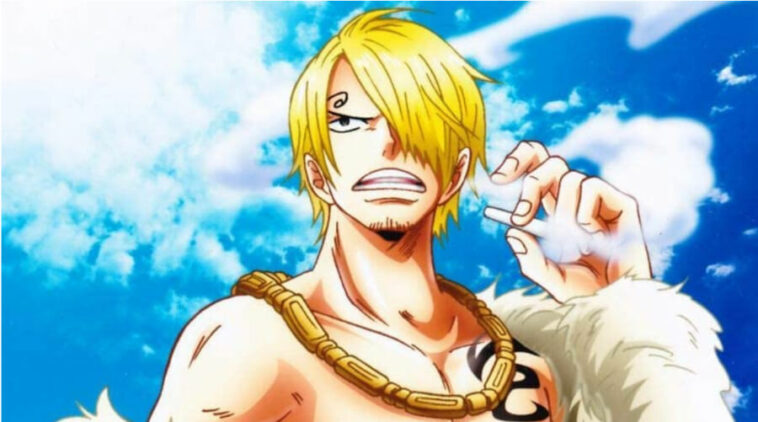 His dream is to find chef’s Paradise All Blue. Though his role is cook of the crew, he is the top fighter on the crew along with Luffy and Zoro.

Sanji is a tall man with long legs and a muscular man. He has blond hair which he keeps brushing to one left side of his face. His distinctive physical traits are his eyebrows that form a spiral at the end.

He is mostly seen wearing a black double breasted suit with golden buttons and a tie with a long sleeved buttoned shirt of varying colors. His clothes changed more often than the other crew.

As for shoes, he wears dress shoes, a black leg style that is durable and designed to increase his attack power. He is rarely seen without a cigarette as he is a chain smoker.

Sanji is a man that talks in a composed manner and rarely act without thinking. He mostly tells people what they need to hear rather than what they want to hear. He is calm, cool, and collected, almost like a secret agent.

“You don’t know how valuable food is, or how much work goes into cooking, you stupid prince!” – Sanji to his brother Ichiji

“Messing with a cook of the sea is a good way to get yourself killed…..Remember that well.”

“A cook’s hands are his life. I can’t afford to scratch them in battle.”

“You underestimating my skills as a cook?”

“You selfish people! Can’t you see that he’s hungry? Why do you hurt him? I think he is sick, so he can’t find food by himself. Am I right? Here! Eat this food.”

“This course is over! No need for dessert.”

“ I couldn’t confess my feelings for you, so I watched you from afar, being happy with someone else.”

“Leave this guy’s key to me, I’ll do what you cant do; you do what I can’t do. Think carefully! Read the situation. If you’re here, there’s got to be a way Robin-chan can be saved! Usopp!”

“A real man is someone who forgives a woman for her lies!”

“I heard the sound of a woman’s tears falling.”

But despite his strengths and immerse power, he has a principle not to lay a finger on women when they fights.