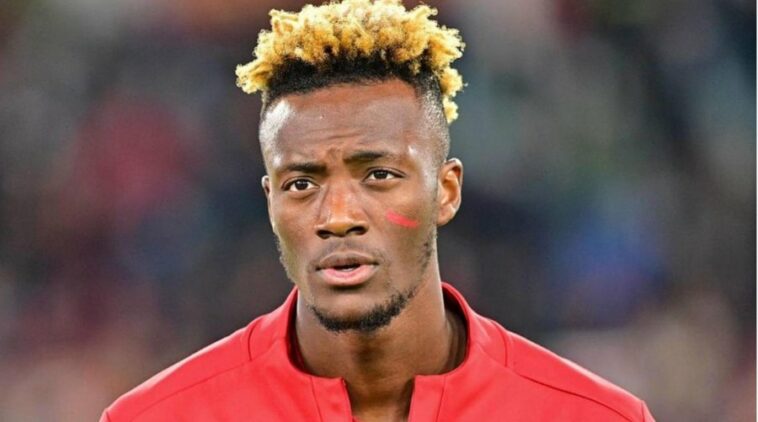 Tammy Abraham joined Chelsea FC’s youth setup when he was 7 years old. At that time, he came through the south-west London club’s academy system and could catch glimpses of idols such as Frank Lampard or John Terry.

He progressed through Chelsea youth system and made his debut for the first team in 2016 in the Premier League against Liverpool.

In 2017, he signed a new five year contract with Chelsea FC. During the year he was at Chelsea, he was sent on loan to three Championship clubs such as Bristol City, Swansea, and Aston Villa in the 2018-19 season.

During the time he was loaned, he scored 53 goals for the clubs and even won a title win them. He went back to Chelsea in the 2019-20 season and scored 15 goals in 34 Premier League appearances.

In the 2020-21 season, because of the change of coach, he played less and ended the season with six goals and 12 appearances out of 22 games.

Looking for a better chance, he moved to Italian side, AS Roma and signed a five year contract in 2021 and handed the number nine shirt.

He has also represented England at youth level. He made his international senior debut in 2017 in a friendly match against Germany.

“Players like Didier Drogba, going to watch him play and seeing him off the pitch as well, I got to see how he was with the players and the youngsters. Growing up, he was a good idol. He’s a bubbly, funny character. He likes to make people feel welcome. You need those kind of people, wherever you are.”

“Scoring goals is what I love, and it gives me that confidence every time I hit the net.”

“I have always been confident.”

“I have always been ambitious.”

“I’m a person who looks at myself, and after every game, I like to reflect on my performance, not just the team.”

“Every time I go out there, I just try to find the weakness of my opponent and then use that to my advantage.”

“I have to keep proving myself, and that’s what I am willing to do.”

“There are times you need more than talent, and so you have to make sure you give your all and leave everything out there on the pitch.”

“It’s not just always going to be easy and winning games; you have to go through the downside as well.”

“You just have to think that you will get chances, you will score goals – stay relaxed. Stay in the game and show them what you are made of by scoring.”

“I am just going to keep getting in the right place at the right time and try and get more goals.”

“Scoring comes naturally because every time I come off the pitch and I haven’t got a goal, then I am not happy with my performance.”

“I enjoyed every minute of being at school. I was doing my work but still playing football.”

Tammy Abraham began football at an early age in Chelsea FC youth system. When he was on his senior debut, he was loaned and won a title at the club he was at.