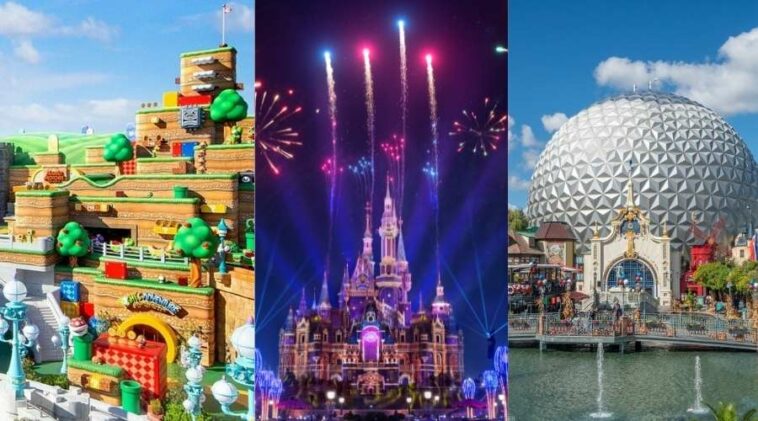 Across the world, you will always gonna find various amusement parks that probably make you feel interested and excited.

Amusement park is actually filled with different kinds of attractions and facilities that will trigger your curiosity and excitement.

There are a lot of amazing amusement parks in the world, but these are the shortened version of the list.

Amusement Parks in the World You Must Visit

Every toddler and child in this world probably always has a dream in mind to visit Disneyland Park at least once in a lifetime.

This amusement park is actually located in Anaheim, California, and was first opened to the public in 1955 under the supervision of Walt Disney, the founder.

Not only visiting the “lands”, but visitors are absolutely allowed to enjoy the live performances in Disneyland.

Those live performances usually form as parades and firework shows, which are held regularly, seasonally, and on special occasions.

If you want to experience the vibe of an old-style amusement park, then Tivoli Gardens has to be your top priority.

Tivoli Gardens, or Tivoli for short, is an amusement park that is located in Copenhagen, Denmark, which was opened on 15 August 1843.

One of the most popular attractions in this park is Rutschebanen, its wooden roller coaster which is also called Bjergbanen (The Mountain Coaster).

Not only that, this park is also amazing because of The Demon, another roller coaster, and also a swing ride called The Star Flyer.

But if you prefer to be more “passive” and enjoy this park in peace, you surely can enjoy some kiddie rides and performances in this park.

Efteling is actually an amusement park that is located in Kaatsheuvel, Netherlands, and was opened for public in 1952.

This amusement park has a whole concept as a fantasy land, proven by its attractions that show fairy tales, folklore, fables, and some myths.

Efteling came from a nature park with the attraction of a playground and the Fairytale Forest to be a full-sized amusement park.

On the other side, this park has some amusement rides, such as roller coasters and also four dark rides.

Because of its unique excitement, this park became the most visited theme park in Europe in 2020 before Disneyland Park in Paris.

If you, by any chance, visit Germany and want to experience the exciting feeling of the amusement park, you need to go to Europa-Park.

Europa-Park can be defined as the largest amusement park in the country and the second most popular park in Europe.

This amusement park has a lot of attractive attractions. One of them is the roller coaster, which in this park, the Alpenexpress Enzian is the oldest roller coaster among other 12 roller coasters.

You definitely can also try other amazing facilities as well, such as the resort which has a space of at least 95 hectares.

And also, don’t forget to try the new attraction of Europa-Park, Rulantica, a water park which was opened in November 2019.

Another top amusement park that you can try to visit is Universal Studios Japan, which is located in Osaka.

Universal Studios Japan first opened for the public in March 2001 and in its first year, there were 11 million guests already.

In this park, there are various “lands” and attractions, such as Hollywood, New York City, San Francisco, Minion Park, Jurassic Park, Amity Village, Universal Wonderland, and many more.

But unfortunately, in February 2020, this park started to close this park until June 2020 to combat the Covid-19 pandemic.

If you visit France once in a lifetime, make sure not to just be blinded by the beauty of Eiffel Tower, because you can experience more than that.

You are encouraged to visit Astérix Park, an amusement park which is located in France. Like the name, this park is inspired by Asterix, a comic book series by Albert Uderzo and René Goscinny.

Every year, this park has more than 2.3 million visitors, that makes this park become the second largest theme park in France.

Even though this amusement park is very well-known for its roller coasters, this park has a lot more to offer.

In this park, there are also rides and themes which are derived from historic cultures, such as Ancient Greece, Romans, Gauls, and Ancient Egypt.

Spain, for sure, is one of the most interesting countries to visit whenever you want to travel the world, especially with your family.

Don’t forget to visit PortAventura Park, an amazing amusement park which is located in the PortAventura World Resort, Spain.

This park was opened in May 1995, and starting from its opening year, this park always grows rapidly year by year.

PortAventura Park has five theme areas that are inspired by civilizations concepts, such as Mediterrània, Far West, México, China, and Polynesia.

And yes, each of the theme areas has its own amazing attractions and shows that will make your holiday brighter.

Raise your hand if you are one of the most excited South Korean culture fans, because Everland Theme Park is gonna be on your one of bucket list.

Everland Theme Park is actually a part of Everland Resort, a vacation resort and an amusement park which is located in Gyeonggi-do, South Korea.

This park was actually opened in 1976 as a single amusement park, but lately, this park started to develop into a resort with a golf course, museums, and hotels.

When you enter this park, you will find two main entertainment sections, which are divided into Everland and Caribbean Bay.

In Everland, you can experience five lands, such as Global Fair, Zoo-Topia, European Adventure, Magic Land, and American Adventure.

Not only in Denmark and Austria, but you are surely allowed to experience the excitement of an old amusement park in England.

England has Alton Towers Resort, which is located in Staffordshire and was opened to the public back in 1860.

This park is divided into some amazing facilities, such as theme park, spa, water park, hotel complex, and mini golf.

There are various attractions that you can try when visiting this park, such as Nemesis, Runaway Mine Train, The Smiler, Rita, Oblivion, Wicker Man, and many more.

If you want to visit this park, you can try to visit in late March to early November because it just opens during that period.

And last but not least, you are also encouraged to visit an amusement park in China, Shanghai Disneyland.

This park is located in Pudong, Shanghai, and is a part of the Shanghai Disney Resort, and was opened in June 2016.

During the first year of its opening, there were already 5.6 million guests that made this park start to be popular.

You can enjoy various themed areas in this park, such as Toy Story Land, Adventure Isle, Tomorrowland, Mickey Avenue, Fantasyland, Treasure Cove, and Gardens of Imagination.

There are a lot of interesting moments when we visit amusement parks, especially when we travel the world.

Make sure to pack your bag and experience joy when you visit those parks.