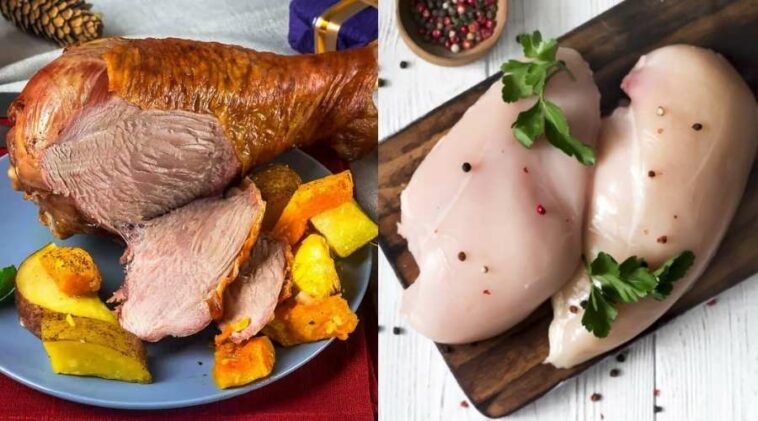 You might have been eating chicken meat until now, but it is not surprising if you don’t know the differences between dark meat vs white meat.

White fibers are usually made up of converted carbohydrates that can be energy after the converting process.

Until now, there are some unwritten debates to know what is the best kind of meat, dark or white meat, in terms of health reasons.

Before judging how “bad” it is, let’s start with their definitions and differences.

What is Dark Meat?

Dark meat is actually meat that consists of muscles with more saturated calories than fat because the fat content is high.

Usually, dark meat contains a lot of minerals and vitamins, such as iron, thiamine, zinc, riboflavin, and also vitamin B-12.

Dark meat is made up of fibers that allow the production of aerobic energy and is filled with an adequate amount of oxygen. Usually, dark meat can be found in the legs.

That oxygen is usually used to do a converting process of carbohydrates and fat to be converted into fuel.

There is an additional process from myoglobin that stores oxygen in the cells of the muscle and eventually gives the meat dark color.

What is White Meat?

In the form of chicken meat, you can usually find white meat in the wings and breast, which consist of muscles that are used for flight.

This type of muscle enables chickens to do short bursts of movement because they need fast energy production.

Thus, this muscle is usually supported by anaerobic energy that can process carbohydrates quickly without oxygen.

Because of this, the content of myoglobin is low, which affects the lighter color of this kind of meat. On the other side, white meat also has low fat.

Read also: How to Shrink a Shirt in Different Ways

1. Dark meat consists of higher vitamins and minerals in terms of zinc and iron compared to white meat

Even though both dark meat and white meat are healthy, the nutrition within these meats has slight differences in terms of their concentration.

Because dark meat has a higher fat content than white meat, it contains higher calories, proteins, and vitamins.

The contents of iron, zinc, riboflavin, and niacin in dark meat are significantly higher than in white meat.

On the other side, white meat has lower calories and fats, which can be a healthy option for people who want to lose the fat in their bodies.

2. There are some differences between dark meat and white meat, but both of them are healthy options to be eaten

As we have mentioned before, dark meat consists of more fats and calories, but it does have more minerals and vitamins.

Meanwhile, white meat has lower calories and fats, but the concentration of minerals and vitamins is lower than dark meat.

Thus, it can be seen that both of them are good sources of nutrition for our health reasons that can support muscle growth and also weight loss.

You just need to adjust that kind of meat that will meet your health needs and balance it out.

We can’t say dark meat is more tasteful than white meat because it always leads to personal eating preferences.

Dark meat consists of higher concentrations of fats, so it is not surprising if dark meat tastes more flavorful and tender.

On the other hand, white meat can be defined as milder in terms of flavor, but you can easily dry out white meat when cooking.

If you prefer meat that has more taste, you can choose dark meat as the best option. But if you prefer a mild taste, then white meat will be your best friend.

The contents of myoglobin in white meat are so much lower than in dark meat, so the muscles will have a lighter color.

This condition is also supported by the low-fat contents in white meat, which this kind of meat makes energy from carbohydrates, not from fat.

Because of it, white meat doesn’t need to store a bunch of fats and the energy comes from carbohydrates.

Another significant difference that can be seen when comparing dark meat and white meat is the capillaries contents within.

Dark meat consists of a bunch of red muscle fibers. This fiber is filled with more capillaries than white fiber.

The capillaries within the red fiber are used to increase blood flow and also oxygen to the targeted area.

5. Like the name, the color of dark meat is darker than white meat

The color of a food is mainly affected by the nutrition and the compositions within that food, and so is the meat.

Dark meat, as we have said before, has a higher amount of protein and oxygen. It is also supported by blood cells, so no wonder the color is pretty dark.

Meanwhile, white meat doesn’t have direct access to blood cells and is not supported by proteins within our bodies.

These conditions then affect the color of the white meat, which is so much lighter than dark meat.

After knowing the differences between dark meat vs white meat, we can all see that actually there is no advantage to judging one of them as “bad” or “good”.

Depending on your actual needs, both of those meats are very good for our health. What we can do to keep it healthy is our way of cooking and how much we eat it.