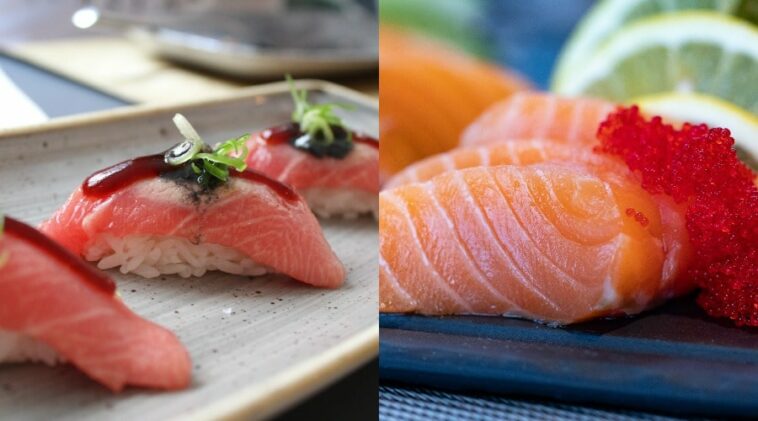 So many people enjoy Japanese cuisines, such as nigiri and sashimi, but the majority of them don’t know the differences between nigiri vs sashimi.

Even though both are formed in thin slices of meat (usually fish and seafood), each of them has its own characteristic and uniqueness.

Nigiri or nigirizushi is actually one of many types of Japanese sushi in the market. Nigiri is made from a lump of rice and accompanied by a slice of fish on top, usually raw fish.

The term ‘nigiri’ is referred to ‘nigirizushi’, which has the meaning of ‘hand-pressed sushi.’

The chef usually will start by molding the rice and the topping (fish or any other seafood) by hand.

One of the reasons to combine the rice and the slice of fish is to strengthen the strip of the fish and rice because the rice has great stickiness, meanwhile, the fish contributes to its moisture.

Ingredients that are usually used in the making of nigiri are fatty tuna, yellowtail, albacore, salmon, and sometimes shrimp.

Even though the ingredients can vary, the cooking and serving process must be kept fresh and handled with care.

Usually, nigiri is served with some amount of wasabi and modest garnishes, such as sauce, ginger, or even minced scallions.

Most nigiri lovers prefer eating sushi by hand and the majority of them love to dip the fish in the soy sauce to add some taste to their tongues.

The reason behind that etiquette is to prevent the rice from absorbing too much soy sauce.

Sashimi is technically a row of pierced meat, which is served with extremely thin strips of raw meat.

This cuisine doesn’t come with rice for the companions, usually, it is just eaten as it is, eaten with some amount of soy sauce and toppings.

The ingredients of sashimi itself can vary, not only fish and other species of seafood but it also can be formed from any kind of food, such as horse and chicken.

For the Japanese, sashimi usually is eaten as the first course, but it can also be the main course with the companions of miso soup or rice.

Even so, many chefs from Japan suggest that sashimi is the best appetizer for Japanese formal dining before eating another strong-flavored food.

As the first course, sashimi can be served with various companions, such as wasabi, fresh garlic, shiso leaves, daikon radish, or fresh ginger.

Wasabi is the most common companion because the Japanese believe it can kill harmful parasites and bacteria from raw seafood.

Differences Between Nigiri vs Sashimi?

For the beginner in the Japanese cuisine world, differentiating between nigiri and sashimi can be intimidating.

They both can be differentiated from any indicators, such as the cooking process, ingredients, garnishing style, and even the ways to eat them. Check those differences below.

1. Nigiri is one of the many types of sushi, but sashimi is actually not sushi

Don’t be confused with the similar appearance between nigiri and sashimi. Even though they are similar, sashimi is not sushi at all.

Both of them are usually served with raw fish with thin slices, but nigiri comes with pressed rice which previously has covered by vinegar.

On the other hand, sashimi doesn’t have rice on the bottom of the slices.

2. Nigiri is not always raw-made, whereas you will never find cooked sashimi in the market

Even though many people correlate the majority of Japanese food with raw-made foods, not every nigiri is raw-made.

In the market, sometimes you can find nigiri with the delicious cooked or maybe seared fish. But unfortunately, you probably can’t find sashimi with cooked meat slices.

3. Nigiri is always made up of fish, sashimi can be made from any other meats

Don’t be fooled by the stereotype of the main characteristic of Japanese foods; always comes from fish.

In fact, sashimi is not always built up of fish, but it can be made from thin slices of any kind of meat, such as beef, chicken, horse, or even frog.

Meanwhile, nigiri always comes from fish and some other seafood, such as squid, octopus, or shrimp.

If you hope you can eat some carbohydrates from sashimi, well, maybe it’s better to shift your choice to choose nigiri instead.

Because nigiri is always accompanied by pressed vinegar rice when it is being served, but usually, it will be hard for you to find any sashimi with rice.

5. The garnishing of nigiri is almost nothing, while sashimi is very fancy at garnishing

When it comes to garnishing, sashimi is the real winner for this.

For the sake of aesthetics, both of them are really cute to be captured on social media, but the garnishing style of sashimi is really on another level.

Usually, sashimi will be garnished with some fancy toppers, such as toasted seaweed (nori), daikon radish, or maybe sisho leaves.

For the final touch, the chef usually will add some other sauces to spice up the taste.

Meanwhile, nigiri is a little bit modest with the garnishing style itself. The fanciest garnishing you may ever meet in nigiri is a sauce. But still, it doesn’t make the attractiveness of nigiri fade away.

6. You can eat nigiri with a hand or chopstick, but just consider using a chopstick when you eat sashimi

Everyone has different preferences when eating, but one of the things to be considered when eating sashimi is that maybe it’s better to use a chopstick than use your hand.

It’s understandable, because usually, sashimi comes from many types of garnish and toppers, and you may don’t want to make your hands full of dirt.

It’s different from nigiri, which is acceptable whether you want to eat it using a chopstick or hand. Both are pretty good, it depends on your eating preference.

7. Nigiri is considered to be ‘more traditional’ than sashimi

It’s majorly affected by the modesty, purity, and simplicity of the nigiri, starting from its ingredients, garnishing style, and the process of serving itself.

It makes nigiri tastes so authentic, even though sashimi is also no less authentic, compared to nigiri.

At a glance, nigiri vs sashimi can be similar and it’s hard to differentiate them from each other. Both of them are delicious, interesting, and have a lot of health benefits for your body.

Just remember to eat the differences between nigiri vs sashimi which are already stated above and you will get the most satisfying food experience!