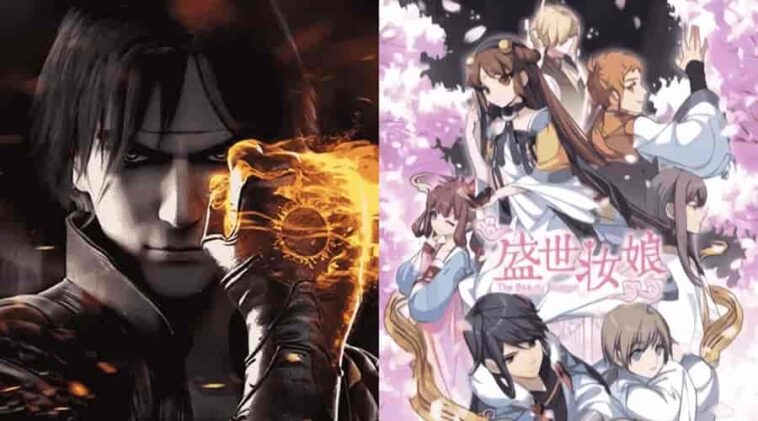 It turns out that anime doesn’t always come from Japan! Maybe when you hear the word anime, the first thing that appears is Japan.

Yes, that’s right, Japan is a country that won the animation production which is no longer in doubt.

Even in the sakura country, anime production is far more interested than live action films based on the animation.

Starting in 1914, these Japanese cartoonists became interested in and experimented with the medium of film. The first successful animated short film was recorded as Momotaro (1918).

It turns out that not all anime comes from Japan, there are also some from other countries such as China, one of them.

Did you know that China also produces its own anime? Maybe some people are still unfamiliar with anime originating from China because usually identical anime comes from Japan.

Even though not many people know about Chinese anime or “Donghua” it is no less interesting than Japanese anime productions.

Similar to Japanese anime, Chinese anime also presents various genres into their anime productions such as action, drama, adventure, which are no less good than Japanese anime.

What is unique, Chinese anime in some parts has a visual that is quite different when compared to Japanese anime.

For you all who are bored with Japanese anime and want to try a new sensation of watching anime made in China. Here, 10 recommendations for the best Chinese anime.

If you are a lover of the Horror, Mystery, and Thriller genres, this anime is perfect for you.

Duan Nao or Die Now tells about the characters in this anime experiencing mysterious events where there are serial murders, terrible conspiracies, anti-human betrayals, galactic wars, to betrayals in the world of Serebrum. They decided to uncover the events.

Tells about Hao Yi, a cute student who suddenly gets a confession of love from the girls at his school, totaling 15 episodes.

This anime is a comedy genre, a harem romance which is also based on the Manhua (manga for China) series.

Wo Jiao Bai Xiaofei is a horror comedy genre which tells about the journey of the main character, Bai Xiaofei to find the figure of a girlfriend who then takes him on another adventure, namely fighting mutants.

For lovers of Shounen Anime China, this one is a recommendation for you. Having a supernatural action genre, Zhen Hun Jie, tells the story of Xia Ling, a fresh graduate student looking for a job.

He gets an interview message towards Requiem Street or Rahkhasa Street where humans and spirits live side by side.

Still with the same genre, namely harem world, romantic comedy, only this anime tells the story of a security guard, Ma Yingxiong who one day saves a cultivating girl, Ma Yingxiong accidentally embarks on a cultivation practice journey.

In the modern cultivation world, everywhere is the law of the jungle, everyone feels insecure.

Read more: So Scary! 9 Horror Movies That Will Haunt Your Life

If you are a lover of the action genre, Mo Dao Zu Shi is one of the best Chinese anime that has succeeded in raising the name of Chinese anime production to the surface.

Mo Dao Zu Shi tells the story of a demon sect founder named Wei Wuxian who is often viewed negatively by people because of the mess he made.

Wei Wuxian never realized that he had to be killed at the hands of the betrayer and the clan that wanted to defeat him.

This anime has 2 airing seasons namely. The first season of the series titled Qian Chen Pian aired from July 9 to October 6, 2018, on Tencent Video with a total of 15 episodes.

While the second season titled Xian Yun Pian aired from August 3 to October 5, 2018, with a total of 8 episodes.

Maybe if you are a lover of fighting series games, you are already familiar with the games that released by SNK which in 1994 carried the initial concept of a crossover game.

The King Of Fighter: Destiny or KOF has collaborated with Japan so that it has 2 language versions, namely Japanese and Chinese.

This anime is about the biggest fighting tournament called King of Fighter.

What makes it different from the Japanese KOF anime is that the Chinese version of KOF’s visuals are like video games with 3D CGI effects.

This anime is still on going status for those of you who want to watch it.

Sheng Shi Zhuang Niang is a shoujo genre about a beauty blogger who is deported to another world to play a game where she has to dress a cat with various cosmetic products.

For those of you who like online games, this anime is an adaptation of a web novel by Butterfly Blue.

Which later became donghua (anime Chinese) with 13 episodes, with a duration of approximately 24 minutes each episode in 2017 and is still running.

This anime was also made into a live action with the title The King’s Avatar in July 2019.

This anime tells about a former e-sports athlete who was dismissed because he was considered too old to participate in an e-sports tournament called Glory.

Finally, he became an internet cafe operator and returned to playing the new Glory server starting from the initial level with a new avatar named Lord Grim.

This anime is a little different from most other anime, especially anime from Japan. Wu Dong Qian Kun has a background in the problems of the Chinese empire and the existing clans.

This animation was also adapted into a live action with the same name in 2018.

This anime is an action martial arts genre that tells the story of a child from the Lin Clan in the Yan Empire who is determined to avenge his family he is looking for a mysterious talisman stone that is sought after by all clans.

The existence of Chinese Anime or Donghua proves technological progress in China.

Even some of their animations have implemented the concept of 3D CGI effects, which are no less good than Japanese animation.

From the list of animation recommendations above, which is your favourite choice?