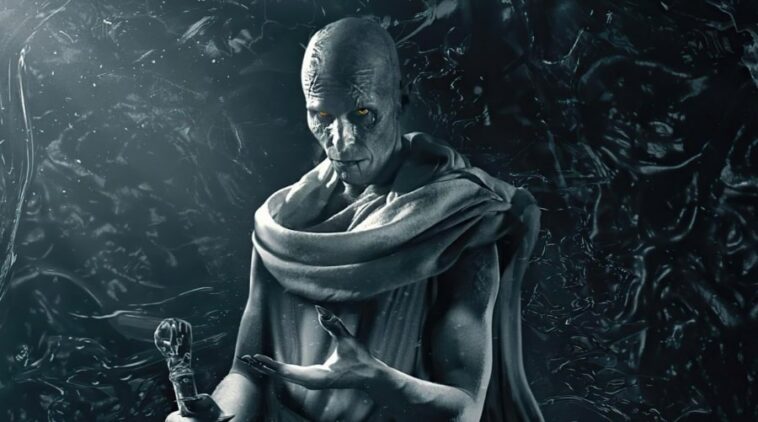 Gorr the God Butcher is a supervillain in Marvel comic. In Marvel comic, Gorr role as a butcher for God makes him face Thor back to back until he is deceased but is resurrected by King Loki.

His journey to become God’s butcher began when one of one his family die due to starvation. Though he was born on a no-name planet, he was taught to believe in Gods.

When the planet he lived in in the brink of starvation, he prayed to Gods, but none of his prayers get answered.

When his son, Agar died due to starvation, Gorr gave up his hope and believed that there was no God. That was when he met Knull, a dark elder God, and a gold-armored God.

Full of rage, he threatens the gold-armored God, and when God asked for help, the dark God’s sword bonded to him and formed a weapon for him to kill Gods.

He then makes a vow to vengeance all the Gods who never answered his prayer and travels the cosmos for thousand years in order to kill all Gods.

As a God-butcher, he has an alien-like physique with pale white skin and tentacles that emerge from his head.

He also has a muscular build which makes him look scarier with black markings all over his body due to his bond with All Black.

Unlike the comic version of Gorr, his character in Marvel Cinematic Universe portraying more human and not using much CGI, so there’s tiny resemblance with his comic version.

His appearance in Marvel Cinematic Universe relies heavily on make-up. His character is a skinny human with white skin and black markings all over his body, wearing white attire that cover all of his body and his head.

“My name is Gorr, son of a nameless father, outcast from a forgotten world. I have slain my way through multitudes to stand here at the genesis of all things. Blackened by vengeance, wet with holy blood. One simple dream still strong in my heart… The dream of a godless age.”

“This is my vow, all Gods will die” – Gorr in Thor: Love and Thunder.

“It fell from the sky many years ago, on a world without a name. I picked it up… and butchered my first gods. And then as I stood there, baptized in their blood. A question formed in my simple little brain… I wonder if there are more?”

“Feel that little lord of heaven? That sense of helplessness as you fall? That is how you feel to be mortal. Next you will learn how it fell to be butchered.”

“The only one who God care about is themselves.” -Gorr in Thor: Love and Thunder

“The Gods will use you, but they will not help you. There is no eternal reward for us.” -Gorr to Jane, Thor: Love and Thunder

“Two omnipotent brothers squabbling with each other while all of existence withers around them. This is exactly why I’ve always despised your kind. This… is why all Gods must die.”

“Help… You? Help YOU!? Where were you!? Where were you when my children were starving!? When my wife was screaming for your help!? When my mother was being butchered like an animal! WHERE WERE YOU WHEN WE NEEDED OUR GODS!?”

“I had a daughter once. I put my faith in a higher power hoping it would save her and she died. Now, I understand. My daughter is the lucky one. She does not have to grow up i a world suffering and pain, run by wicked Gods.” -Gorr in Thor: Love and Thunder

Gorr’s tragic backstory makes him vow to kill all Gods, even going to length making Godbomb, but in the end, his rage toward Gods must met and end when he encounters Thor.

His bond with All-Black Necrosword might make him have a strong superpower, but he is dependent on his swords and not able to do any harm without it.