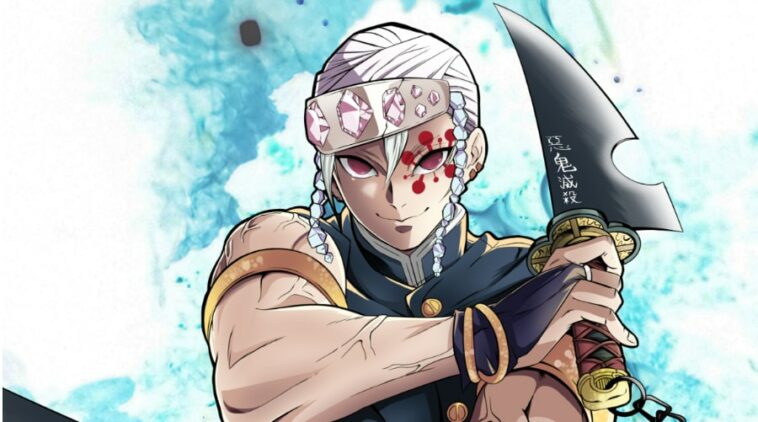 Tengen Uzui is a main supporting character in the anime series Demon Slayer: Kimetsu no Yaiba, who is a former member of the Demon Slayer Corps, who replaced the previous Sound Hashira.

He is an eccentric and flashy individual, who always wants to be “flamboyant”. In addition, he is very self-centered with his demands on others, treating the Demon Slayer very harshly during Hashira’s Training Arc.

Behind his selfish and arrogant nature, it seems that Tengen also has a caring side hidden under his flamboyant facade. However, this trait is only shown to those who are very close to him, especially his three wives, Makio, Suma, and Hinatsuru.

As for his physical appearance, he is described as a tall, broad-shouldered, and muscular man. He also has brownish skin and his hair is white with uneven length. He also has maroon eyes.

“Do I look like someone with any talent? […] See, this country is vast. It’s teeming with people who’d blow your mind. Some are complete enigmas. Some can take up a sword and become a Hashira in two months. Me, chosen? Don’t give me that crap! Just how many lives do you think I’ve let slip through my fingers until now?”

“We could be in for an ultra flashy fight to death”

“Starting now, things are going to get real flashy!”

“After all that grandstanding in front of the Master, what’s this sorry state?”

“You’re no upper-rank demon. Since you’re too weak. You’re not the one I’ve been searching for”

“If someone like me gives that impression, you really are living a blessed life”.

Although, he has an arrogant nature and always considers himself to be God, Tengen Uzui still has kindness in his heart, especially to his three wives.