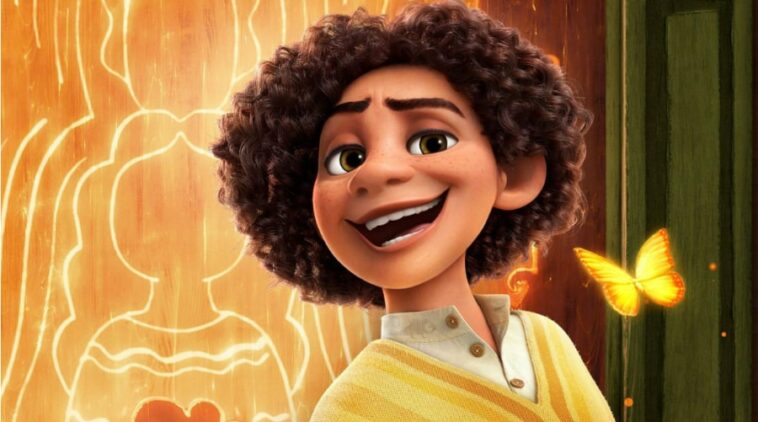 Camilo Madrigal is a supporting character in the animated movie Encanto. He is described as a theater kid of The Madrigals.

Camilo Madrigal is middle child of Pepa and Felix Madrigal. He is the same age as Mirabel, the protagonist of Encanto.

He is a natural entertainer as he is easy-going, fun-loving, and charismatic. He is also extroverted and social, so he is on good terms with many of the townsfolk.

He enjoys the spotlight and has a good sense of humor. While he might be wisecracking, he is tender, sweet, and responsible. He is good with infants and children.

Camilo might be described as a cheerful kid, but he also suffers from insecurities and feelings of pressure.

As a Colombian boy, he has a slender build. Light golden-brown complexion with hazel eyes and freckles across his nose and cheeks.

He has curly dark auburn hair, which makes his appearance noticeable. He often wears a white long-sleeved shirt with the sleeves rolled up.

His button is mismatched as a result of his collar that opened. He wore yellow ruana with darker yellow streaks combined with black pants and black sandals with white etching.

What’s more interesting is that his clothes have a chameleon motif that is much like his power of shapeshifting.

His shapeshifting power makes him able to do pranksters on people around him, though he is fun-loving, but he is responsible and loves his family and people in townsfolk.