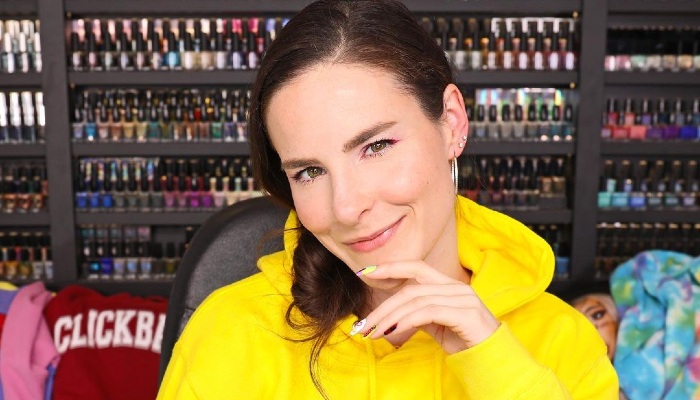 Simply Nailogical, who has the real name Cristine Rotenberg, is a Canadian YouTube star and actress. Her name was famous after she shared videos about nail art on her YouTube channel.

Her nail art videos gained a lot of viewers and made her recognized by a lot of fans.

Not only that but she also made some other YouTube channels to expand her career on that platform.

She starred in a commercial for Fib Finder, Furby, and many more. To focus more on school, then this young star decided to stop taking acting roles at 12 years old.

Cristine went on to become a crime statistics analyst for the Government of Canada. Before getting the job, she kept herself busy by sharing nail art creations on her blog and Instagram.

In particular, she has a great interest in the shifting rainbow color called Holographic or Holo.

This internet personality has created many nail arts using Holo. This led her to call herself a Homosexual and the Holo Queen.

After the success of her Instagram and blog posts, Cristine opened up her YouTube channel under the name Simply Nailogical in 2014.

At first, she focused on creating a one-minute nail art tutorial video with little to no instruction.

Her audience found them rather confusing, so this YouTuber began to incorporate voice-overs and eventually appeared in her videos.

Her entertaining and informative videos earned her quite a big following. But she got massive in 2016 after creating the viral trend of 100 coats of things.

In the original video, Cristine did more than 100 coats of nail polish. This viral video launched her name into YouTube stardom.

Something she did a lot is reaction videos, especially to troom troom videos.

In 2019, Cristine launched her nail polish brand called Holo Taco. At first, she only released black and blue polishes, along with 3 holographic top coats.

The collection sold out in just two hours. With this success, this businesswoman launched many more collections. All of them are very well received by the audience.

Simply Nailogical is known as married to Ben Mazowita, which is a YouTube star as well.

But she may keep her love life private, it is not known when they were getting married.

She has a net worth of around $7 millions. Her main source of net worth comes from her YouTube channel.

She also has a nail polish brand named Holo Taco. She sold it for $12 to $25 per item on her website.

“Have some fun before you die”

“She protec, she attac, but she also deal u holo crac”

2. Her makeup is on point

3. She looks beautiful spending the day in the snow

4. She is a true artist with her nail polish

5. Cristine is the queen of fun and silly photos

Cristine Rotenberg always brings the most fun contents on her YouTube channel. Whether it’s nail related or not, you are guaranteed to have fun.