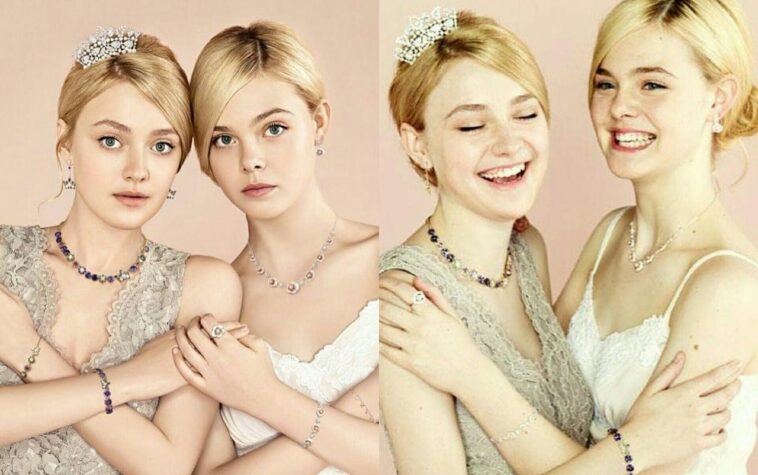 Two beautiful young women, Dakota and Elle fanning are famous with their talents and abilities as an actress. Dakota started her career at 6 years old, while her younger sister Elle joined her in the same movie when she was two.

Some people think that the fanning sisters are twins. Hair, face, eyes even their smile look similar. However, Dakota is four years older than Elle.

Their appearance was the same back to teenager era, but since they were 20s Elle got taller and both are getting more fancy and lovely.

They are also known as a public figure who almost got less rumor but achievement instead. Here are some facts and information about The Fanning sister you should know.

1. Dakota is older than Elle fanning

When people look at the fanning sister, they may think that Elle is older sister since she was taller than Dakota. However, Dakota was born at 23rd February 1994, while Elle at 9th April 1998.

2. They play together in film ‘I am Sam’

This movie tells about family life from intellectual disability father who was struggle to save his child alone.

Dakota and Elle was act as Lucy, the child of her special father. Elle played as the younger Dakota when she was two years old for her first career.

3. Both are in relationship with their boyfriends!

4. Dakota and Elle Get many awards

The fanning sisters make their fans very proud. They always got awards from movie/film they play.

Read also: These 10 Celebs Very Successful in Their 20s

5. They are relative of Kate Middleton

Some information explain that Dakota and Elle are a distant cousin of princess Kate Middleton. They are descendents of King Edward III, king of England in 1327-1377.

Elle is a big fan of Marilyn Monroe since she was young. She ever dressed like her idol in The Dream Halloween Fundraiser when she was 7 years old.

Dakota newest movie is Vienna and The Fantomes which released on 30 June 2020. This story tells about a girl (Vienna) as roadie from band Fantomes.

Meanwhile, Elle’s latest movie are The road not taken and All The Bright Places. In 2021 Dakota and Elle will play the same drama film title The Nightinggale which will release on 22 December 2021.

Those are information and facts about The Fanning Sister, Dakota and Elle who have amazing acting skills and barbie faces. The Best career for The Fannings.