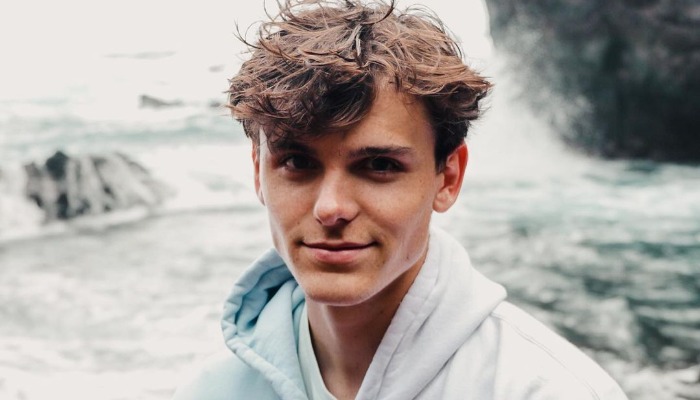 Aydon Holley became viral after doing a double backflip on a park and immediately sat on the flying swing in the form of a slow-motion video. His video was made for fun at first, so he did not realize that it would be viral.

He was previously known as Aydon.h but he then changed it into aydon_holley.

After becoming more famous on the platform, he held a meet and greet at Six Flags Fiesta, Texas. In September 2020, he also made a Twitch account for live streaming.

He launched a website named shopaydonholley.com to sell his merchandise line, including hats, hoodies, and phone cases.

His TikTok videos when he jumped then did air roll and changed 28 hoodies with 28 flips were featured on the Overtime TV’s Twitter account.

Other TikTok stars include Robert Caroll and Zayd Elie featured him for their prank videos.
Aydon was sponsored by American Eagle, the beverage brand Sunny D, and Joby Inc.

1. Aydon looks at his own shadow

2. This TikTok famous poses with his dog

3. He wears a blue T-shirt and denim jacket

4. Aydon’s side profile is charming

5. His laugh is mesmerizing

Aydon Holley was once a mere high school student, but TikTok has changed his life to be a famous person.