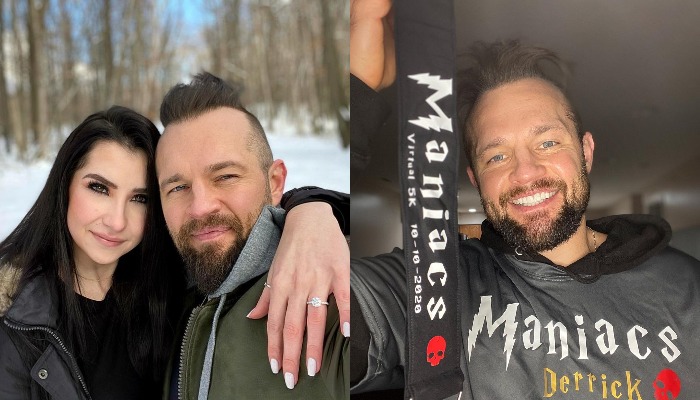 Derrick Kosinski engaged with Nicole Gruman, his lovely partner whom he loves the most.

He said that Nicole is a beautiful woman who has a really nice personality and a pretty face with or without make-up.

Derrick proposed to Nicole on January 19, 2021. However, he posted his picture with his partner on January 21, 2021 and expressed how grateful he was.

“Ready for the next chapter… I love you.”, expresses Derrick. Let’s get to know more about Derrick Kosinski!

Read more: 10 Best Blazer Looks of Celebrity You Must Follow

2. He is a reality star. He appeared in Battle of the Sexes 2

3. Derrick plays on MTV’s the Challenge. He came up in The Inferno 3, The Ruins, Fresh Meat, and The Duel

4. He studied in Maine East High School in Chicago and continued to  Oakton Community College

5. He had married to Amy Machin before he enggaged to Caroline

6. From his marriage, he has one lovely kid

9. People thought that he was close to Kina Greabe. However, both were denied

10. He is a close friend of Road Ruler and Katie Doyle

Happy engagement for Derrick Kosinski and Caroline Gruman for their next step relationship. Hopefully, they will always have a happy life ever after.