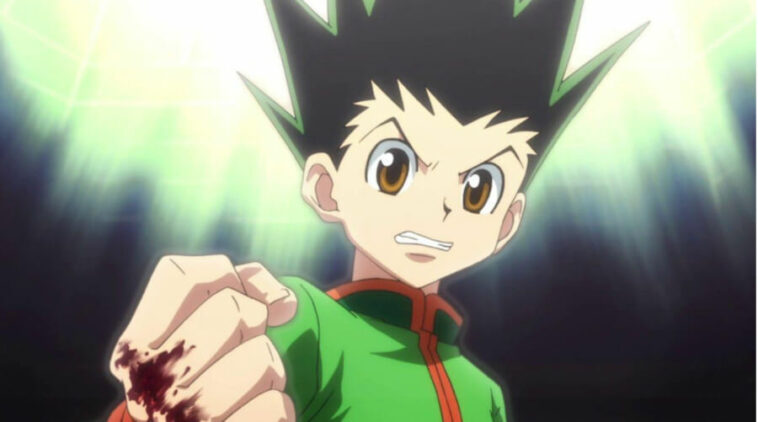 Gon Freecss is the main protagonist of the Hunter x Hunter series, who is the son of the famous Hunter, Ging Freecss, and wishes to find his father.

Gon is described as an athletic, kind, and friendly boy who loves adventure. He is also not an educated boy, so he is not good at maths.

He is a Booster, who is known to be simple-minded and determined, thus making his friends and enemies trust him and stand by his side.

In his physical appearance, he is described as a young boy who has black hair. He also has beautiful brown eyes.

He likes to wear clothes such as a green jacket with reddish edges that covers a black or white tank top underneath, green shorts, and green lace-up shoes.

“Being a Hunter must be an important job. So important… that family comes second.”[

“I’m not here to be tested, I’m just here to see my friend. If that means being an intruder, fine.”

“Can I ask you something? How can you kill people who have nothing to do with you?”

“We’ve got to get stronger and go back as soon as we can!! To save Kite!”

“I swear… I’ll take on that bastard myself.”[

“Do you remember me? My name is Gon Freecss!! I came to see you to restore Kite!!!”[

“I guess it wasn’t that I wanted to see him. I realized after I saw him… that my goal had been to find him.”

Although Gon Freecss has a fairly small posture, when it comes to fighting, he has extraordinary strength.