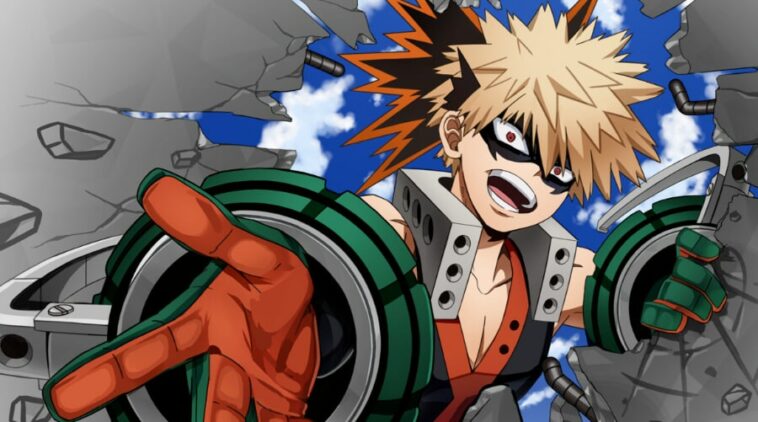 Katsuki Bakugo is one of the most popular characters in the anime series, My Hero Academia.

He is the rival of Izuku Midoriya and also the student at Yuei High School, in the second A. His dream is to become the most powerful hero to dethrone All Might.

Katsuki Bakugo is a young man of medium height, with a rather narrow but muscular body and slightly tanned skin. He has short ashy blonde hair and his eyes are sharp and thin, bright red in color.

He is a fierce and temperamental character, especially at the beginning of the series. At first, Katsuki looks cruel and not like a hero.

However, after being accepted by Yuei and experiencing several personal defeats, one of them even coming from Izuku, Katsuki gradually turned into a less antagonistic person, but still retaining many of his unpleasant traits.

He is incredibly focused on achieving his own victories and has learned never to underestimate his opponents.

“I won’t just be number one… I will have first place, far ahead of the others!”

“When you spend your time despising others, you don’t see your own weaknesses!”

“I will never accept anything less than an absolute victory! Four to zero, without a scratch! That’s how you win when you’re the strongest!”

“Every time Deku gets stronger, I grit my teeth to keep from falling behind. Even at this 30 percent speed of his… I ain’t gonna be left behind. I’ll take his growth and make it my own, all to rise higher. Even higher than him – the “chosen one”. I’m not gonna lose… I can’t afford to stay a loser!”

“In the end it doesn’t change what I have to do.. I’ll become a hero that surpasses even you, Deku!”

“I haven’t changed. My goal’s always been the same– To surpass All Might and become the Number One Hero.”

Although often portrayed negatively, Katsuki’s ferocity and competitive impulse gave him an important role in the Second A, as a kind of inspiring figure.

Katsuki Bakugo is not only very athletic and talented in combat, but also very intelligent and extremely insightful, capable of strategic planning and quick improvisation.

He doesn’t seem to care much about what others think of him, barely caring about violent behavior.