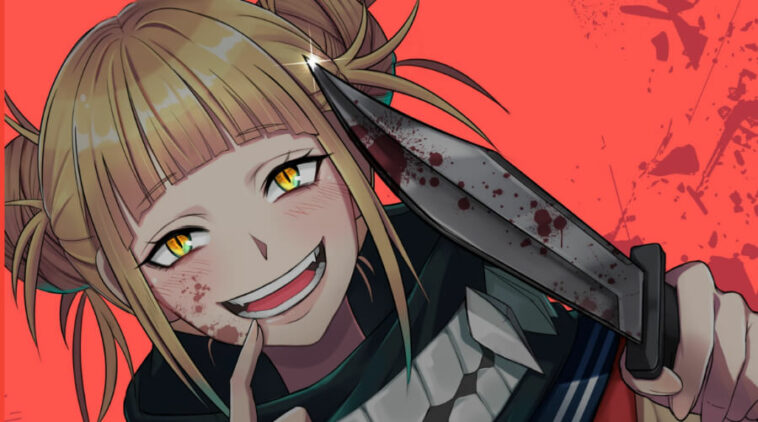 Himiko Toga is the villain in manga and anime My Hero Academia. She has fair skin that is prone to blushing, and with her bright yellow eyes, she looks rather pretty.

Her face somehow resembles a cat because her upper and lower canines are more pointed and longer than the rest of the teeth.

Her hair is pale, more like dirty blonde, and styled into two messy buns with straight fringe and two chin-length side bangs that frame her face.

She wore a plain seifuku outfit with Kansai collar, combined with a blue skirt and shirt and paired with red scarf ties. She also wears an oversized beige cardigan with a pocket on either side.

For the shoes, she wore typical Japanese outdoor shoes, which are dark brown dress shoes with thick heels and knee- length black socks.

As a villain, Himiko Toga might be the creepy one because she can smile after killing someone. Even when she is in the middle of danger, she is still able to smile, and when she feels bored or annoyed, then she would stop.

This shows that our villain is somehow mentally unstable and has twisted perceptions, especially about love and friendship.

“Where do they draw the line? If heroes are supposed to save people then was Jin not considered a person? Will they kill me too? That’s what I want to ask Izuku and Ochaco. Depending on their answer I’ll be fine.” – Himiko contemplating Twice’s death

“When I was little, I was told to stop being me! But that doesn’t work! When you shut your feeling away, it only grows inside!”

“Of course you wanna be like the one you love. It’s natural. So you end up decking yourself out to look like him. But after enough time, even that’s not enough. You literally want to become him. There’s no helping it. So what’s your type? I love tattered guys reeking of blood. That’s why I always carve people up in the end.” – Himiko to Ocharo Uaraka

“Izuku, you’re just like Ochaco. And just like my mom and dad. You think that heroes and those they protect are the only ones… who count as real people. So people like you and I are destined to remain apart.”

“I just wanna love, live, and die my way. My normal way. I wanna be even more like the people I love.”

“Listen Ochaco, when I think about the people I love it makes me wanna become them. This desire to take all their blood for myself gushes up till I just can’t stand it. I get all emotional just thinking about it. That’s how I am, but other people aren’t like that. It’s so hard for me to live like this.”

“Life is too hard! I wanna make a world that’s easier to live in.”

Himiko Toga is a dangerous villain with obsessiveness and the desire to kill someone she loves.

She is a scary one because she could smile even after killing her opponent. Her desire to kill someone she loves is part of her obsessiveness and her psycho tendency.