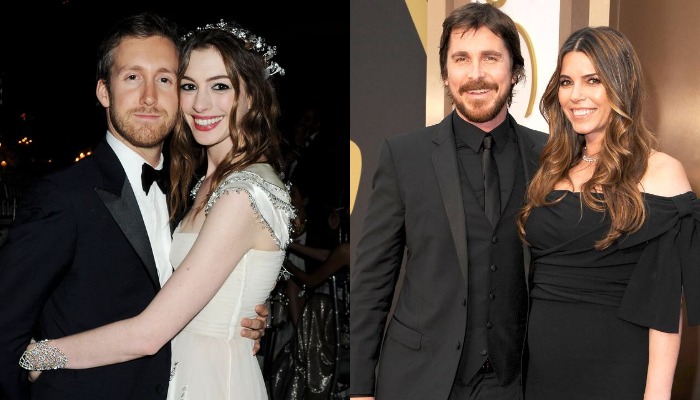 We think that celebrities marry to another superstar or a great musician.

However, sometimes they prefer to find their true lovers who are completely different from their job or people who work behind the scene.

They met their partner on various occasions. Sometimes, the celebrities met them in the entertainment industry, but, on the other time, they met on the special celebration day.

1. Aaron Paul married to Lauren Parsekian in 2013. His wife is a director. They firstly met at Coachella, Valley music and art festival

2. Anne Hathaway has love at first sight with her husband, Adam Shulman. He is a director, jewelry designer, and a minor actor. Shulman and Hathaway met at Palm Spring Film Festival

3. Christian Bale married to Sibi Blazic, former model  in 2000. Bale explains that he never expected any marriage relationship until he met his wife. They met in Las Vegas 2020

5. Jerry Seinfeld married to Jessica Seinfeld in 1999. She is an author and philanthropist. Both met firstly in 1998

6. Jon Bon Jovi and Dorothea Hurley got married for 31 years. His wife is a great karate instructor. Both met in high school in New Jersey

7. Lisa Kudrow and Michel Stren married since 1995. It was love at the first sight, according to Lisa Kudrow’s explanation. Her husband is a French advertising executive

8. Matt Damon married to beautiful bartender, Luciana Barroso in 2005. They live a very happy and harmonious life together with their children

9. Nathalie Portman married to Benjamin Millepied in 2012. Millepied is a choreographer and dancer from French. Both met at on film setting

10. In 1999, Patrick Dempsey married to his lovely wife, Jillian Dempsey. She is a make-up artist and they met at hair salon

Read also: 10 Hollywood Celebrities Without Make Up But Still Awesome

Those 10 celebrities have a very lovely and perfect life together. They always spent time together and they look so in love every time they go together.

What do you think about those marriage relationships?