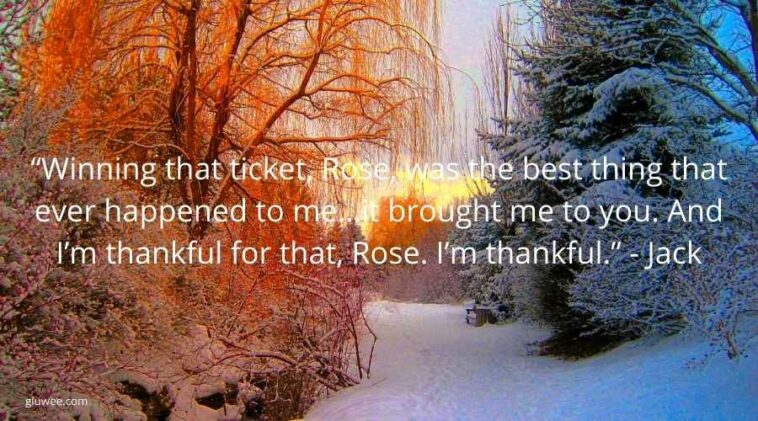 Titanic Quotes – The legendary Titanic, must be familiar with the movie Titanic or the titanic story of a luxury ship that crashed into an iceberg?

Yes, we are all familiar with the titanic thing and the mystery in it that haunts and is famous for all of us until now.

Titanic is a 1997 American epic, romance, and disaster film screened and directed by James Cameron.

This film tells the story of a love story between Jack and Rose, whose actors may already be familiar, played by Leonardo DiCaprio and Kate Winslet, who come from different social statuses aboard the RMS Titanic, which sank on its maiden voyage on April 15, 1912.

Cameron’s inspiration in making this film was based on his fascination with the wreck of the RMS Titanic, he wanted to convey the emotional message of the tragedy and thought that a love story interspersed with the tragedy of death was important to create that message.

Production of this film began in 1995. A reconstruction of the Titanic was built at Playas de Rosarito, Baja California.

Scale models and Computer-Generated Imagery (CGI) techniques were also used to describe the sinking of the ship.

The film was funded by Paramount Pictures and 20th Century Fox and was at the time the most expensive film ever made, with an estimated budget of around $200 million.

Titanic received 14 nominations at the 1998 Academy Awards and won 11 of them, including Best Picture and Best Director.

This film also became a huge success because, this film was also named the highest grossing film of all time for 12 years, and it was only in early 2010 that this film was defeated by another James Cameron film entitled Avatar.

The famous pearl of wisdom spread by this film is “nothing on earth could come between them” which has become a new legend for the motivating film world.

On April 4, 2012, a 3-dimensional version of this film was re-released in theaters to commemorate the centenary of this film. the sinking of the RMS Titanic.

There are many things that we can study that feed from this film which brings us to a new motivation.

Here are 50 titanic quotes that inspire and bring new colors to the movie industry.

Titanic Quotes About Love, A Struggle Full Of Learning 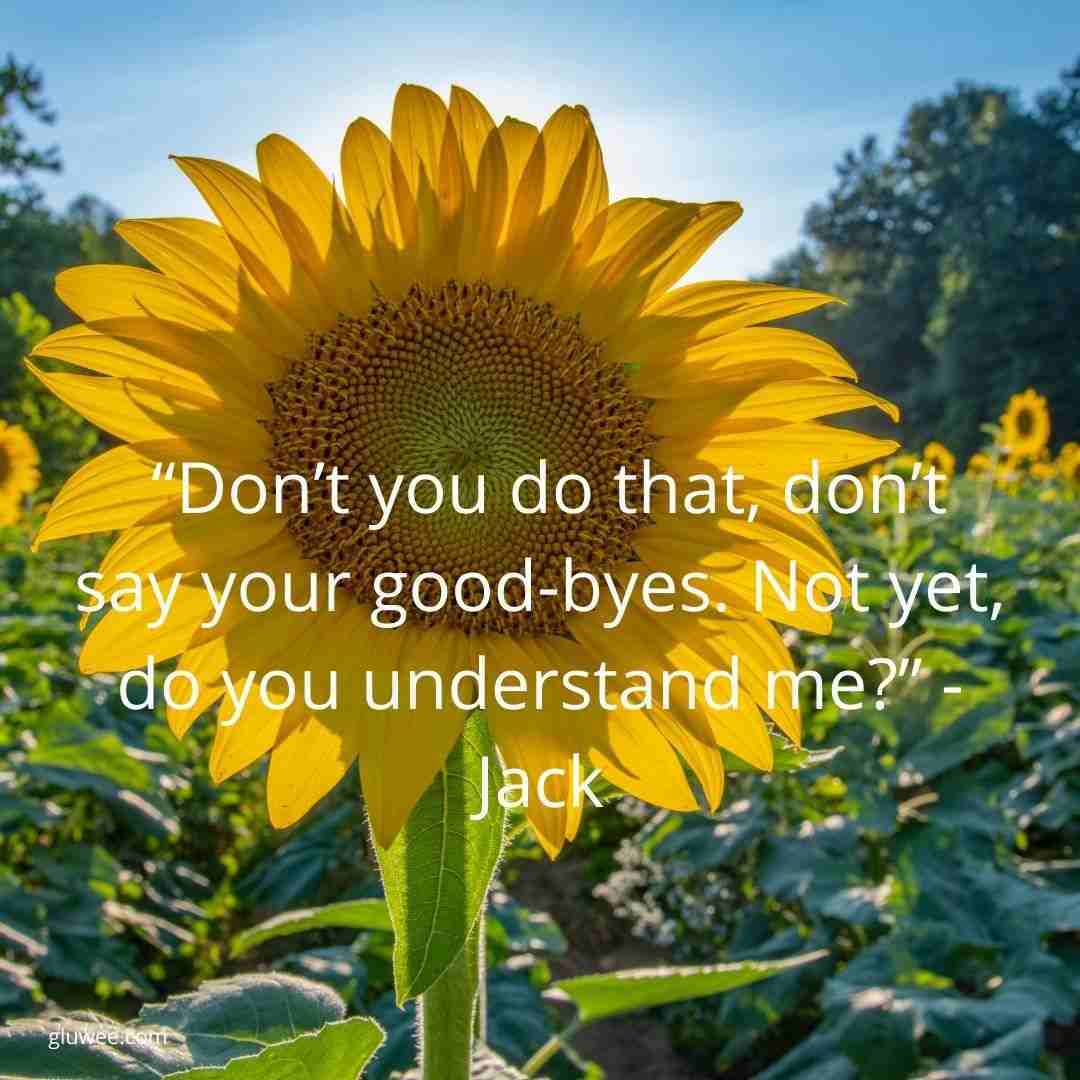 1. “From the very day that she was designed she was almost doomed… [the iron rivets were] the Achilles heel of the Titanic.” – Paul Louden-Brown

2. “The big icebergs that drift into warmer water melt much more rapidly under water than on the surface, and sometimes a sharp, low reef extending two or three hundred feet beneath the sea is formed. If a vessel should run on one of these reefs half her bottom might be torn away.” –
Captain Edward John Smith

3. “The ship was absolutely still, and except for the gentle, almost unnoticeable, tilt downwards, there were no visible signs of the approaching disaster.” – Lawrence Beesley

4. “I was told to go up and see how things were and made my way up a dummy funnel to the bridge deck. By that time all the boats had left the ship, yet everyone in the engine-room was at his post. I was near the captain and heard him say, ‘Well boys, it’s every man for himself now.’” -Alfred White

5. “To my poor fellow-sufferers: My heart overflows with grief for you all and is laden with sorrow that you are weighed down with this terrible burden that has been thrust upon us. May God be with us and comfort us all.” – Eleanor Smith

6. “Are we never to educate ourselves to foresee such dangers and to prevent them before they happen? All the evidence of history shows that laws unknown and unsuspected are being discovered day by day: as this knowledge accumulates for the use of man, is it not certain that the ability to see and destroy beforehand the threat of danger will be one of the privileges the whole world will utilize?” – Lawrence Beesley

7. “I swam around for about half an hour, and was swimming on my back when the Titanic went down. I tried to get aboard a boat, but some chap hit me over the head with an oar. There were too many in her. I got around to the other side of the boat and climbed in.” – Harry Senior

8. “Anything of any sort can be deemed ‘unsinkable’ unbendable, unbreakable, even ’til the day so comes when it sinks, breaks, and bends. Titanic is no different.”

9. “I was thoroughly familiar with pretty well every type of ship afloat but it took me 14 days before I could, with confidence, find my way from one part of that ship to another.”

10. “Not until the last five minutes did the awful realization come that the end was at hand. The lights became dim and went out, but we could see. Slowly, ever so slowly, the surface of the water seemed to come towards us.”

11. “Except for the boats beside the ship and the icebergs, the sea was strangely empty. Hardly a bit of wreckage floated just a deck chair or two, a few life belts, a good deal of cork.”

12. “Striking the water was like a thousand knives being driven into one’s body. The temperature was 28 degrees, four degrees below freezing.”
Charles Lightoller

14. “The sounds of people drowning are something that I can not describe to you, and neither can anyone else. Its the most dreadful sound and there is a terrible silence that follows it.”
Eva Hart

15. “I saw the first lifeboat lowered. Thirteen people were on board, eleven men and two women.”
Harry Senior

16. “It’s not a question of actually finding a bone. There are human remains in one form or another around that wreck, as well as all sorts of shattered lives directly associated with it.”
Dan Conlin

17. “The difference between Cal’s taste in art and mine is that I have some.”

18. “The last thing I need is another portrait of me looking like a porcelain doll.” 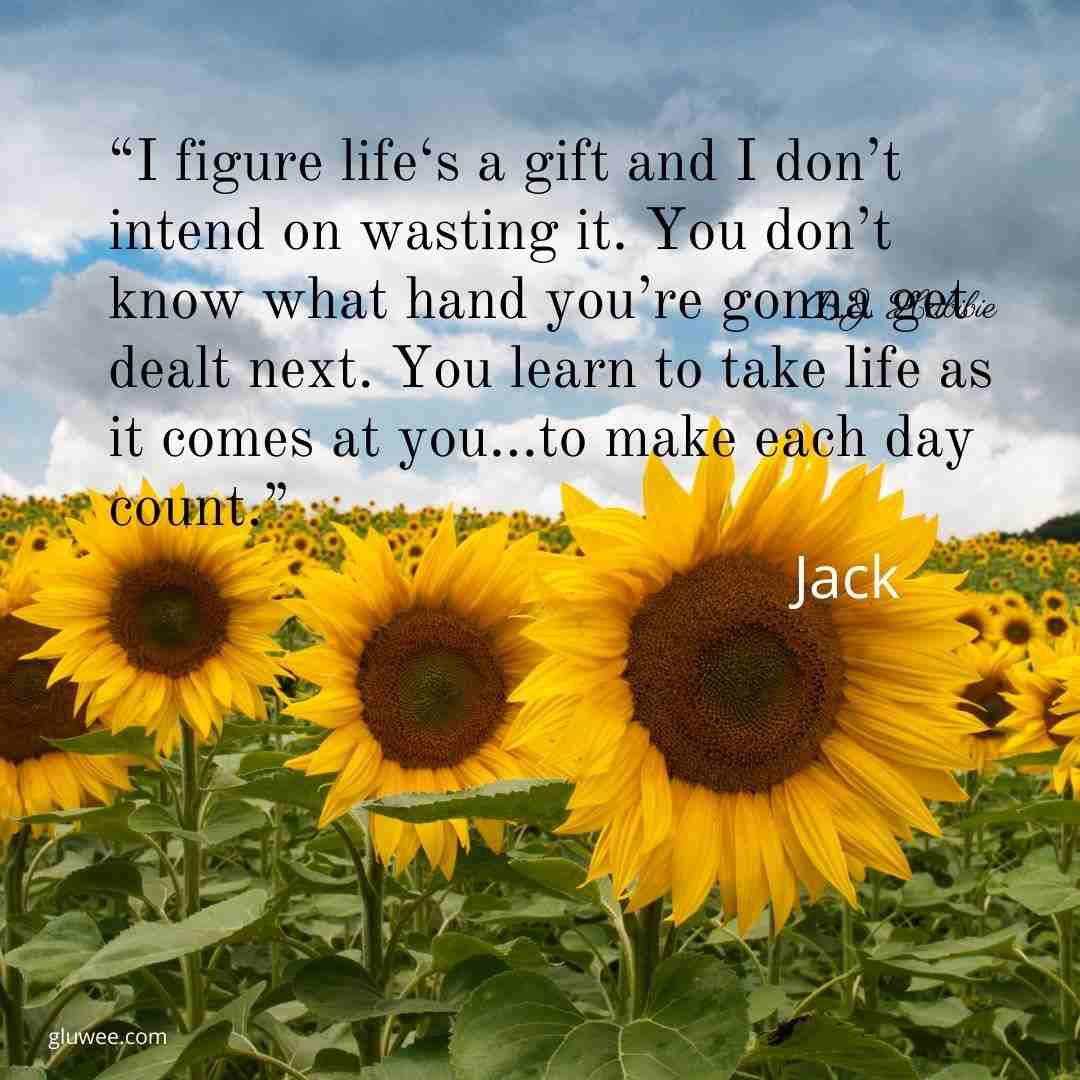 21. “Winning that ticket, Rose, was the best thing that ever happened to me…”

23. “You’re a spoiled little brat, even, but under that, you’re the most amazingly astounding, wonderful girl, woman that I’ve ever known…”

26.“He saved me in every way that a person can be saved.”

28. “We are dressed in our best and are prepared to go down as gentlemen. But we would like a brandy.”

29. “We are the luckiest sons of bitches in the world, you know that?” 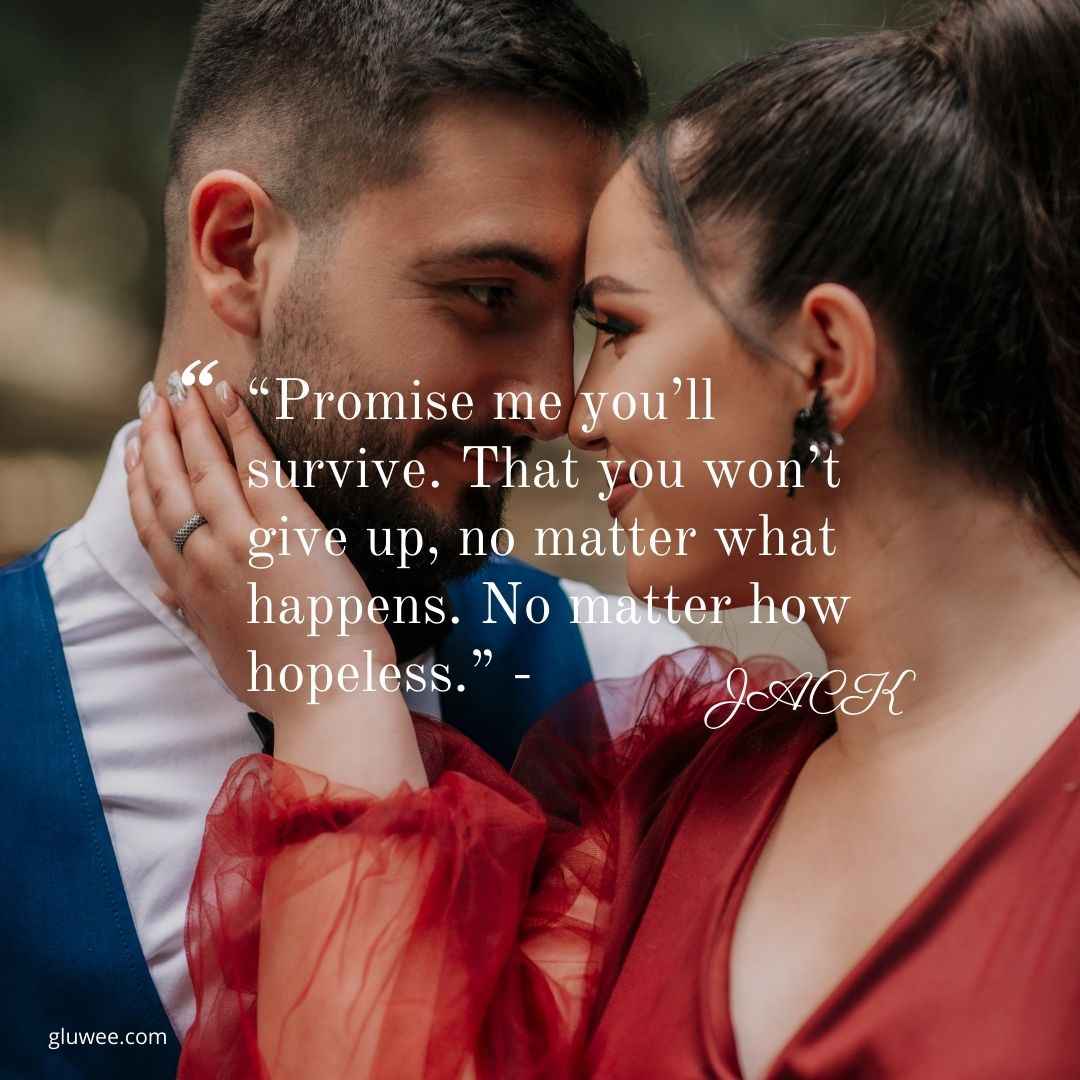 31. “I can’t turn away without knowing you’ll be alright. That’s all that I want.”

34. “Now you know there was a man named Jack Dawson, and that he saved me in every way that a person can be saved. I don’t even have a picture of him. He exists now only in my memory.”

36. “Winning that ticket, Rose, was the best thing that ever happened to me…it brought me to you. And I’m thankful for that, Rose. I’m thankful.” – Jack

37. “Your money can’t save you anymore than it can save me.” – First Officer Murdoch

38. “Gentlemen. It has been a privilege playing with you tonight.” – Wallace Hartley

39. “You jump, I jump remember? I can’t turn away without knowing you’ll be all right.” – Jack

40. “I don’t know about you, but I intend to write a strongly worded letter to the White Star Line about all of this.” – Jack

42. “Promise me you’ll survive. That you won’t give up, no matter what happens. No matter how hopeless.” – Jack

43. “Fifteen-hundred people went into the sea, when Titanic sank from under us. There were 20 boats floating nearby…and only one came back. One. Six were saved from the water, myself included. Six…out of 1500. Afterward, the 700 people in the boats had nothing to do but wait…wait to die…wait to live…wait for an absolution…that would never come.” – Rose

44. “I figure life‘s a gift and I don’t intend on wasting it. You don’t know what hand you’re gonna get dealt next. You learn to take life as it comes at you…to make each day count.” – Jack

47. “Promise me you’ll survive. That you won’t give up, no matter what happens. No matter how hopeless.” – Jack

48. “Fifteen-hundred people went into the sea, when Titanic sank from under us. There were twenty boats floating nearby… and only one came back. One. Six were saved from the water, myself included. Six… out of fifteen-hundred. Afterward, the seven-hundred people in the boats had nothing to do but wait… wait to die… wait to live… wait for an absolution… that would never come.” – Rose

49. “Now you know there was a man named Jack Dawson, and that he saved me in every way that a person can be saved. I don’t even have a picture of him. He exists now only in my memory.”

50. “An endless parade of parties and cotillions, yachts and polo matches.”

Read also: 100 Loss Of Pet Quotes, Remind Us How Precious In Everyone Life

These 50 titanic quotes that are full of food and inspiration for all of us about life, love and struggle that we can take new meanings and learn from.