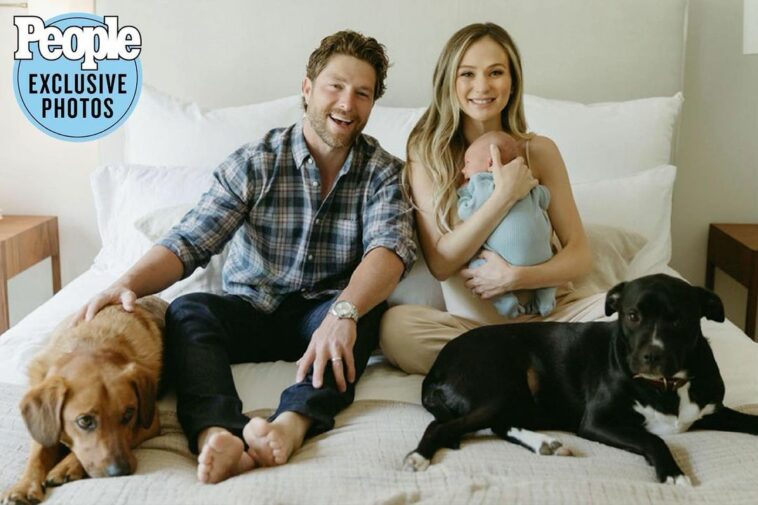 Chris Lane, a country singer, and his wife Lauren Bushnell Lane are so happy for their first baby born, Dutton Walker Lane.

His cute baby boy was born on June 11, 2021 and having weight 9 pounds, who changes Chris Lane’s whole world.

Chris Lane and Lauren married on October 25, 2019 about a year and a half to have a baby since their marriage. Therefore, they wait for the baby for a long time.

Moreover, Chris already made a song for his wife entitled Big, Big Plans, then, for his Dutton, he made a song Ain’t Even Met You Yet to tell his experience and love for his baby.

So, we will see 10 family portraits of Chris Jane and Lauren Bushnell Lane as a cute and adorable couple as well as the happiest family alive.

1. Chris Lane is an American singer as well as songwriter.  His genre of song is country music

2. He has a twin brother, his name is Cory lane. Chris and Cory love playing baseball and football together since they were in high school

4. Then, he makes his solo for a single Broken Windshield View on 10 June 2014, which got a positive respons from many people

5. While his first debut album is Girl Problems which released on August 2016

6. Before he succeeds, Chris Lane and his brother, Cory ever joined a talent show. In 2007, they joined audition for American Idol season 7 but both could not make it

7. His career began to see a clear way since 2008, when he met the uncle of his friend as well as the CEO of Big Loud Record

8. Then, in 2015, Chris Lane firstly met his wife in Austin for radio event. An information also mentioned that Lauren just broke up with her ex, Ben Higgins

9. In 2019, both declared their vows in front of people in Nashville. During the propose for marriage, Chris Lane made a song for his wife entitled Big, Big Plans

10. Now, they are welcoming their first baby boy, Dutton Walker, who was born on June 8, 2021 in Nashville

Chris Lane and Lauren have the most adorable family life. Congratulation for a new mother and father for them!