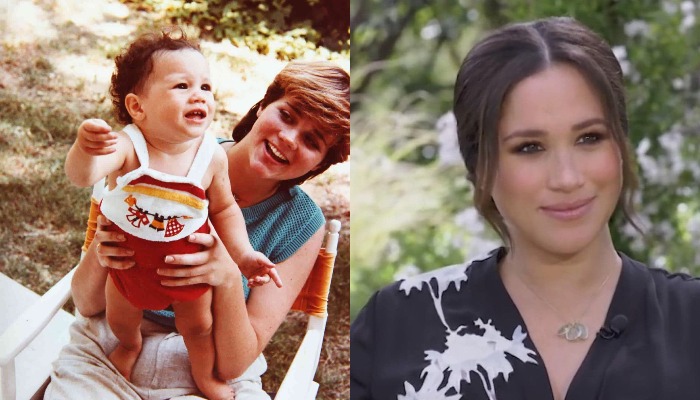 Almost all people know about the name of Meghan Markle as soon as she decided to marry prince Harry from England.

However, since the couple decided to out from the palace, there are a lot of speculations regarding the reason of why they took the decision.

Meghan in one interview with Oprah explained that she had a quite hard time in the palace. Prince Harry also told that they got a lack of support from the royal family.

Therefore, Meghan and Prince Harry decided to out from a royal family, while Meghan continued her career as a Hollywood actress.

Now, we will see how the transformation of Meghan Markle from a very cute kid, a teenager, the wife of Prince Harry to a mother for her kid. Let’s check them out!

Read more: Wow! 9 Celebrities Who Are Famous As Their Parents

1. Meghan Markle was born on August 4, 1981. Her mother is a make-up artist, Doria Ragland and her father is Thomas Markle

2. Meghan is an independent girl since she was young. She has her first job at 13 at a frozen yogurt shop

3. She attended Immaculate Heart High School, Catholic school even she is a protestant

4. She studied at Northwestern University and joined study abroad in Madrid

5. Then, she got her double degree in theater and international studies at Northwestern School of Communication

6. Her first acting career was in 2002 for General Hospital soap opera. She acts as Jill

7. She also became a model in the international game show, Deal Or No Deal in 2006

8. Then, people started to recognize her in her drama television series Suits as Rachel Zane in 2011 until 2017

10. Now, she turns to a very gorgeous mother of her baby, Archie Harrison Mountbatten-Windsor and waiting for her second kid

As the time goes by, Meghan Markle turns into a beautiful lady and a gorgeous mother. We hope that they will the best solution the matter and everything will be better as soon as possible.