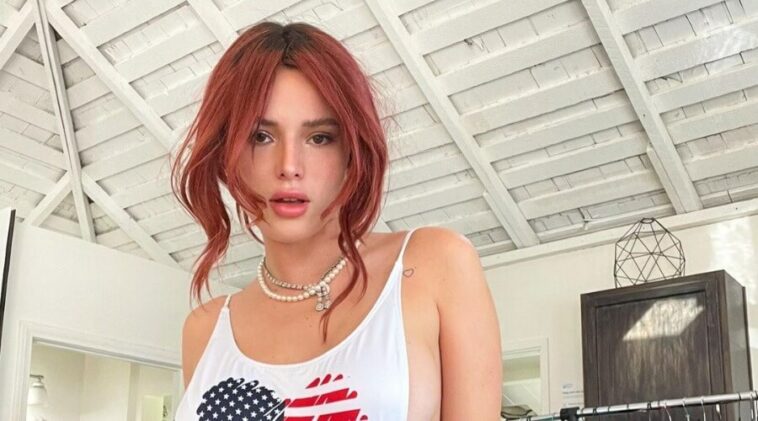 Also, she has passion as content creator to make entertaining content for her social media accounts and internet presence.

Bella Thorne began her acting career with an uncredited, minor role in the movie Stuck on You (2003).

Then, she got a significant break in 2007 when she was given a role in the TV series Dirty Sexy Money.

Later, her acting career saw yet another brilliant ascent in the year 2008 when she got a role in the well-known TV series My Own Worst Enemy.

After that, she came up great with her acting and began giving voices to the animation series Phineas and Ferb (2007).

Then, she stumbled upon the opportunity of a lifetime when she was featured in the TV series Shake It Up (2010).

Since then, she got the opportunity to become an actress in numerous works, including Tv series, movies, and music video appearances.

In this case, she got the chance to appears on MV from The Vamps, Hurricane (2014).

A year later in 2015, she launched her first teenager’s novel, which was trailed by another in the following year.

Also, she likewise voiced a video game titled Marvel Avengers Academy (2016). Thus, the last few couple of years have seen her move from a side-line actress to a notable multitalented star.

Besides being an actress and writer, she is also known as a director. In 2019, she directed the movie Her & His. In this case, the movie was a success and had been nominated for several awards.

In addition, she also active on social media such as Instagram, OnlyFans, and TikTok. She made numerous kinds of amazing content based on her preferences.

Kenton and Bella’s relationship was about puppy love since the two starred together on Disney Channel Shake It Up. Later, they were together from July to September 2010, and end up after the project finished.

Bella and Garrett were rumored to be together in 2010. However, Bella denied the allegations and admitted that the two were just friends.

In 2011, Cody stuck up a romance with Bella Throne after her inviting birthday party. Soon after, they tied together as a couple.

During the early beginnings of Bella’s fame, she went public with Tristan. They spent much time together and walked some red carpets as a couple. However, they eventually split in 2014.

They were both confirmed dating in March 2015. But the relationship lasted only a short time and failed.

A year after failing to have a romance, she was close to Tyler Posey and struck up a relationship in 2016. However, Bella had to split up when rumors surfaced about Charlie Puth in the same year.

Despite not dating, Bella and Charlie have rumors in the middle of Tyler Posey’s relationship. In this case, Charlie denied the rumors and said only friends.

Likewise, Bella and Gregg began dating in the summer of 2016 and ended in December 2016 – especially since Charlie Puth got involved.

Also, Blackbear dated Bella from July to October 2017. Unfortunately, they separated because Bella had rumored with Tana.

In September 2017, Bella informed me that she had more than a friendly relationship with Tana. Then, through social media accounts in February 2019, she announced their split.

After that, Bella dated Derek just for seven months. She dated from October 2017 to 2018. However, there’s a need for more information about they were separated.

In this case, Alex Martini was a set production assistant who had been dating Bella while she was with Benjamin Mascolo. However, they only have a relationship until the project is over.

Furthermore, Bella has a special relationship with Benjamin and announced her engagement in March 2021. Sadly, before breaking up in June 2022, Bella and Ben had a long talk about wedding plans.

With this in mind, they never got married because they were busy with work.

Later, three months after canceling her planned year-long engagement to Benjamin Mascolo, Bella went public with Mark Emms. In this case, she get into relationship with Mark in August 2022.

In addition, a few days after announcing her relationship with Mark, Bella uploaded an Instagram post with a new boyfriend.

Her net worth is around $12 million. Her wealth is earned from several sources, including model, Instagram, TikTok, OnlyFans exclusive content, YouTube channel, actress, singing, and writing.

In August 2020, Bella launched the OnlyFans account and temporarily closed the site. Eventually, she made $1 million in his first 24 hours and $2 million in the first week.

After that, in August 2021, Bella was nominated for one of OnlyFan’s two or three highest-earning celebrities due to earnings of $10 million from the platform.

“I was never a dancer before ‘Shake It Up’.”

“I really love big scarves. I have a whole bunch.”

“Don’t try to impress people. Always be yourself!”

“I don’t think people realize how much work it takes to make an album.”

“I never saw myself as a singer; I never really thought I had the voice for it.”

“Music is a big part of my life. I listen to different genres, and I choose the music that will inspire the next part of my story.”

“I think everything about my life is magical. I’ve struggled, and against most odds, I’m truly having the experience of living my dreams.”

“I know that some girls look up to me for certain things, like dyslexia, and that way I know that they like me for me, so it adds no pressure.”

“I do have many of the same friends I grew up with. Most I’ve known since we were three or four years old! I have made new friends as well.”

“It’s not the traditional promise ring. It’s basically to always stay truthful. I think that’s a really important part of a relationship, that you’re always honest with.”

All in all, ever since Bella Thorne appeared in TV commercials, graced the covers of magazines, and made headlines, her fame kept on rising to the top.  In this case, she is now arguably one of the most notable artists in Hollywood.