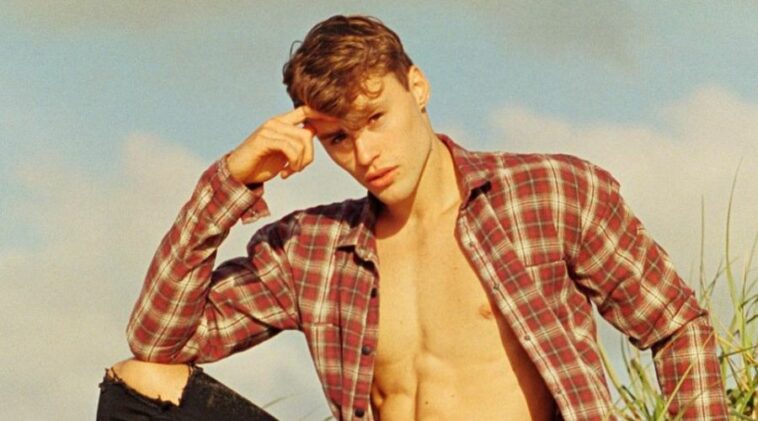 David Laid is known as a bodybuilder, YouTube star, and fitness model. He successfully captivated the public with his mindblowing body transformation in just 3 years, from a skinny boy to a powerlifter.

There’s always a background story from every inspirational public figure, including David Laid, who started his career as a bodybuilder and fitness influencer after being teased because of his body.

He was called skinny when he was at school and David later made that statement became his biggest motivation to transform his body and his life.

At the age of 14, he started his intense fitness training routine under the supervision of a physical therapist due to his scoliosis condition.

He worked very hard every day. From watching tons of YouTube fitness videos and go to the gym every day.

Slowly, his hard work then finally paid off. When he was 17 years old, 3 years after he started his fitness training, he startled the public because of his mindblowing body transformation.

To show his transformation to the world, David later created his own YouTube Channel in July 2019 and posted about his body transformation.

That video later became viral in August 2015, which became his big jump stone to be a fitness expert in the industry.

He then started to post videos more frequently to give inspiration to other people out there.

Because of hard work, David then successfully grew his audience to a million views and followers on his social media accounts.

That grand achievement also helped him to get some endorsement and modeling deals from Euphoria, Gymshark Athlete, and many more.

“I was ridiculously insecure like I would walk around in high school like I needed to have like a massive hoody on I didn’t wear a regular t-shirt because I was flat.”

“Don’t just listen to anything anybody tells you.”

“Plan my training and nutrition for the week ahead, as well as any photo or video work I need to do. ”

“I feel like it was really bad in high school because I was just eating such garbage.”

“I was an absolute twig.”

“Now after I’m eating a lot cleaner it’s honestly I just have a better appetite.”

“I would tell myself to just always prioritize doing what I actually love.”

“I have wet dreams about taking steroids.”

“My most massive insecurity it was like simply how skinny I was.”

“This is kind of like our life, and we want to become something most teens don’t.”

“Create content that you actually enjoy in your own unique way.”

“I was pretty athletic I was always I guess slightly stronger and more athletic than the baseline everyone around else my age.”

“I don’t like food and have to work really hard to get my daily calories! ”

“A person who inspires me Greg Plitt.”

“You can get injured any type of lifting you could trip in the gym, you can get hit by a car so just whatever you do you got to do it safely.”

“I just more prioritizing my health in general rather than eating in a way that could increase my size and strength and body weight as rapidly as possible.”

“You have energy all the time. You feel super good. You’re stronger when you go to the gym. You’re more aggressive and confident. ”

“I kind of came home with it, and I went on YouTube and I typed in, ‘chest workout.”

“Starting a workout routine is one thing but keeping it up is another.”

“You have more of an alpha mentality.”

“I just want to go out and like create projects that like they don’t necessarily have anything to do with myself.”

“You have more of an alpha mentality.”

“I just want to go out and like create projects that like they don’t necessarily have anything to do with myself.”

“When I started training, everyone made fun of me.”

“From the very beginning since I started lifting I always did bench press and squats, I always have them in my routine.”

“Really just leave the ego out the door.”

“My passion was that I would have like gotten somewhere I just made sure I got it get there safely.”

“The only person to blame for your shortcomings is yourself.”

“My appetite is definitely a lot better now.”

“Myself. My desire to improve keeps me pushing forward.”

“A lot of people recommend teenagers don’t take this stuff, but we’re kind of different.”

“I would watch YouTube fitness videos, eat, go to the gym, go home, watch more videos, go to bed, repeat. That’s all I would do. That and go to school.”

“One really look into like you know continue eating clean no matter what like cleans a generic blanket but it’s mighty good nutritionally dense foods.”

“Every aspect of my life was heavily impaired by how insecure I was and how I looked.”

David Laid is such an inspiring person. Even though many people saw him small in his previous years, he can endure it and grow stronger positively. Salute!