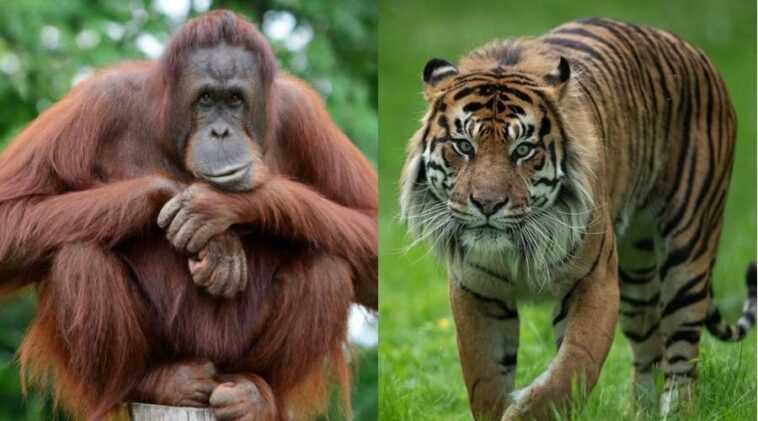 In today’s era, the whole population of the endangered animal species in the world decreases very significantly.

Most of the time, those animals are hunted by hunters to make a new coat, food, or other usage of a human being.

Thus, we, as the next generation of world savers, have to know those endangered animal species in order to preserve them.

A giant panda (Ailuropoda melanoleuca) is also can be called a panda bear (panda). This animal is actually a bear species that is endemic to China.

They usually eat bamboo shoots and leaves and occasionally eat wild tubers, other grasses, eggs, honey, bananas, and many more.

This species lives in central China in some mountain ranges, especially in Sichuan, Gansu, and also Shaanxi.

But unfortunately, after the implementation of globalization, deforestation, farming, and any other sophisticated development, the population of giant pandas remains fewer than 2.500 individuals.

It’s not new news that the tiger (Panthera tigris) is one of the endangered animal species in the world that must be preserved.

Tiger is a part of the cat species and also a part of the genus Panthera. Usually, we can notice the uniqueness of a tiger by the vertical stripes on its orange fur, accompanied by a white underside.

Originally, this species was found in 1758 in Eastern Anatolia Region, Himalayas, Bali, and the Sunda Islands.

Unfortunately, after colonization reached the 20th century, the population of tigers decreases by approximately 93% compared to its historic range.

In 2015, the estimated population of the tiger was around 3.062 to 3.948 individuals and listed as Endangered on the IUCN Red List.

The next endangered animal species that needs to be preserved is the whooping crane (Grus Americana).

This animal is actually a bird that has its origin in North America and is listed as an endangered crane species.

The lifespan of a whooping crane is pretty short. It is estimated life can start from 22 to 24 years in the wild environment.

Because of globalization, modernization, and deforestation, the population of whooping cranes decreases rapidly.

After conservation efforts in 1941, the population of this animal then started to increase, and recently, exceeds 800 individuals.

Who does not know that an amazing and beautiful giant marine mammal, the blue whale (Balaenoptera musculus) is listed as an endangered animal?

The blue whale is very large and big, its length reaches up to 29,9 meters (98 feet) and its weight reaches up to 199 metric tons.

Because of the hunting that was started at the end of the 19th century, the blue whale population started to be listed as endangered animals until the International Whaling Commission banned the hunting of the blue whale in 1966.

Another endangered animal species that needs to be preserved is the Asian elephant (Elephas maximus).

This animal is also called the Asiatic elephant and becomes the only living species in the genus Elephas.

Usually, elephant come from the Indian subcontinent and Southeast Asia, such as India, Nepal, Borneo, and also Sumatra.

Starting from 1986, this species has been listed by the IUCN Red List as Endangered because the population itself has decreased by 50 percent.

Those decreases majorly are caused by poaching, habitat degradation, fragmentation, or even loss of habitat.

We can mention the sea otter as one of the cutest animals in the world, but unfortunately, the population itself is not cute at all.

Generally, the sea otter (Enhydra lutris) is a marine mammal that has its origin in the northern and eastern North Pacific oceans.

They have the small measurement, but they are, for sure, the densest animal in the animal kingdom because of their thick furs.

Sea otters can walk on land, but they are only capable of living exclusively in the ocean to prevent them from harm.

The snow leopard (Panthera uncia) or also well-known as the ounce is one of the most endangered animal species in the world.

This animal is a part of the genus Panthera native to the mountain ranges of South and Central Asia.

Those can happen through the practice of habitat destruction, deforestation, poaching, and many more.

Even though you might think that every gorilla is just the same, typically, there are two species of gorilla, the eastern (Gorilla beringei) and western (Gorilla gorilla).

In this world, the population of gorillas has declined to 220.000 individuals in the wild environment, approximately.

Those decreases came from deforestation, habitat encroachment, and many destructions in the wildland.

Even though the reservation program has already been developed, the social structure and the reproduction system of gorillas are complex, so it’s pretty hard to sustain the population.

Another endangered animal species is the Tasmanian Devil, a carnivorous marsupial that was found in Tasmania.

After some time, this species finally can be found in New South Wales, but only with a small breeding population.

Unfortunately, since 1941, the Tasmanian Devil has been officially preserved and protected because of its decreasing population.

This condition became more chaotic after there was the devil’s facial tumor disease (DFTD) that was found in the late 1990s.

And finally, in 2008, Tasmanian Devils were declared to be an endangered species.

And last but not least, we find the orangutan (Pongo pygmaeus) is one of the most endangered animal species in the world.

Orangutan is an ape native to the rainforests of Malaysia and Indonesia, which primarily can be found in Borneo and Sumatra.

But still, every species of orangutan is considered endangered because of its decreasing population year after year.

Read also: 10 Attractive Places to Travel Without a Passport

Those are the endangered animal species that you need to preserve. Even if you are not an activist, it is important to take care of them.

You can start by raising awareness on your social media, or you can even start to join the community to safe those animals.