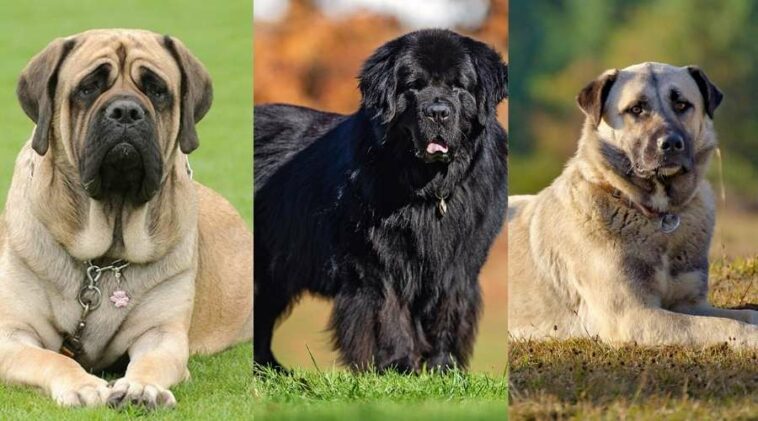 Whether you are an animal lover or not, it is really interesting to know the largest dogs in the world because of their unusual height and weight.

Each of those dogs has its own unique height, weight, shape, fur, color, and many more, and is beautiful in its own way.

And of course, all of those dogs are scattered across the world, so it’s easier for you to see those dogs in person.

Read also: 10 Attractive Places to Travel Without a Passport

Largest Dogs in the World

The biggest dog in the world in the first place is addressed to Mastiff or English Mastiff, as of the 2021 data.

This type of dog is actually descended from the war dogs of ancient Roman society and has the biggest dog breed.

As of 2021, the biggest Mastiff in the world has the name of Aicama Zorba with a weight of 343 pounds according to the American Kennel Club.

But generally, the typical Mastiff doesn’t weigh up to 300 pounds. The male Mastiff usually has a weight of 160 to 230 pounds.

Meanwhile, the female Mastiff usually has a weight of 120 to 170 pounds and is typically slightly shorter than the male Mastiff.

This type of dog has a weight between 150 to 220 pounds, and typically, doesn’t have any significant differences between males and females.

Usually, Boerboel is used by South African farmers to help them in killing leopards and also baboons.

An important piece of information, if you wish to have a Boerboel pet, make sure you have good socializing skills because this dog is pretty aggressive.

Next, we are going to talk about one of the largest dogs in the world for third place, the Saint Bernards.

This type of dog is pretty lazy when they are encouraged to do some interactive activities because they usually just love to sleep.

The male Saint Bernard usually has a minimum of 27.5 inches tall at the shoulder and it makes this dog seems big.

Saint Bernards are usually developed to help Alpine mountaineers when rescuing them, so this type of dog is useful, too.

Meet the next largest dog in the world, the Great Dane, one of the most beautiful and gentle giant dogs in the world.

For some occasions, of course, it is possible if Great Dane has heavier breeds than the usual measurement, such as Zeus.

Zeus itself was one of the tallest dogs in the world because it has 44 inches tall on its own shoulders.

The fifth-largest dog in the world goes to Leonberger, a strong yet masculine giant dog with a cute pair of eyes.

This type of dog is considered as a muscular dog, but many people also consider this dog is so elegant.

Talking about its height, usually, the Leonbergers have 30 inches tall at their shoulder, which is pretty tall for the measurements of the dogs.

Leonbergers have a lion-like mane across their chest and neck and usually are used by water rescue teams.

Another giant dog in the world is Caucasian Shepherd, which got into 6th place among the 10 largest dogs in the world.

Usually, this type of dog was originally used as a working dog and also used to guard livestock against some predators.

Caucasian Shepherd typically has a weight in the range of 99 to 170 pounds, even though it can vary for some conditions.

The origin of the Caucasian Shepherd is Georgia and Russia, which is often used as the prison guard dog.

This type of dog also has a beautiful long coat, especially for males.

Let us introduce you to the seventh-largest dog in the world, the Tibetan Mastiff, a dog of the Mastiff species.

Tibetan Mastiff usually has a weight within the interval of 90 to 150 pounds for the male, but for the female, the weight typically is about 70 to 120 pounds.

This type of dog is usually quiet and calm, but don’t try to provoke them unless you want to get bitten directly.

From the external appearance, Tibetan Mastiff can look intimidating, but actually, they are such cuties!

This dog is usually also independent, so for all of you who love this character of the dog, Tibetan Mastiff is for you.

The next largest dog in the world is still in the same species as the previous dog, Anatolian Shepherd.

Anatolian Shepherd is usually an independent, dominant, and highly intelligent dog that also has large measurements.

For the female, this type of dog has a weight between 80 to 120 pounds, meanwhile for the male, Anatolian Shepherd has a weight of 110 to 150 pounds.

Initially, Anatolian Shepherd was developed in the Kangal region of Turkey as the protector of livestock.

Even though Anatolian has a large size, this type of dog can run up to 30 miles per hour. What an interesting fact, isn’t it?

After Anatolian Shepherd, we finally can meet the ninth-largest dog in the world, Newfoundland, a charming and intelligent dog.

This type of dog usually has a weight between 130 to 150 pounds for the male, meanwhile the female Newfoundland has a weight of 100 to 120 pounds.

Usually, this dog is used for water rescue or lifesaving because it has a muscular build, webbed paws, swimming abilities, and a thick double coat.

But in some cases, Newfoundland is developed in order to help commercial fisherman do their activities.

Based on the record, one of the largest Newfoundland dogs is Tiempo, which has a scale of 178 pounds when it reached 3 years old.

And next, the last largest dog in the world takes its place under the Mastiff dog, the Neapolitan Mastiff.

Male Neapolitan Mastiff usually has a weight of around 150 pounds, meanwhile, the females have a weight of 110 pounds.

This type of dog is very fearless and very protective of its family and home even though its appearance is pretty intimidating.

Neapolitan Mastiff usually has many wrinkles and also drooping lips with a prominent head, so it is very cute.

Even though this dog is cute and protective, you need to be careful if you are still a stranger to them because they can notice the presence of a stranger.

Read also: 10 Amusement Parks in the World You Must Visit

Knowing the largest dogs in the world is very fun to do because we can know what type of dog is suitable to be our pet.

By understanding the type of dog, we can have a pet that matches our personality.