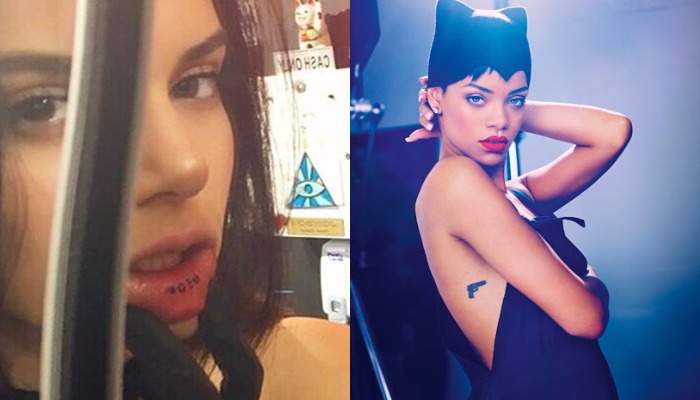 Do you know that some celebrities love wearing tattoos on their bodies? Sometimes, they do it for a specific reason or they just do it for fun.

There are many people who think that a tattoo is an art to express what we feel, while the rests understand it in negative perspective.

Moreover, a tattoo can make the person look cooler or even scarier when they wear it all over their body.

Therefore, we will look 10 cute and adorable tattoos from Hollywood stars for your references in making yours. Let’s see all of them!

1. Angelina Jolie has ‘H’ tattoo on her wrist. People speculated it as an initial name for her brother or her ex-boyfriend

2. Ariana Grande made a tattoo of bee as a symbol of Mancester, where the place got a terror attack and made 22 innocent people died

3. A key and padlock tattoo from Harry Styles. The information mentioned that Louis Tomlinson, the ex member of One Direction also has the same tattoo as Harry

4. Justin Beiber has a small music note behind his left ear as the dedication of Justin into music

5. Kendall Jenner explained that she made a ‘Meow’ tattoo on her lip when she was drunk

6. Rihanna looks so sexy with her gun tattoo on her body, which has the meaning of strength. Moreover, Rihanna made it a few months after she got harassment from her boyfriend

7. Selena Gomez looks so cute with her music note on her wrist after deciding to break from music and focusing in her acting career

8. Shawn Mendes has a rare meditation tattoo. As the function of meditation, it will help you to heal from anxiety and stress

9. Zac Efron prefers a ‘YOLO’ tattoo on his wrist. You Only Live Once!

10. A bird tattoo from Zayn Malik is probably the first tattoo he has. It has the meaning of freedom

What do you think about tattoos from all Hollywood stars above? Almost all of them made them for some reasons.

How about you? Do you have a very unique reason to make a tattoo on your bodies?