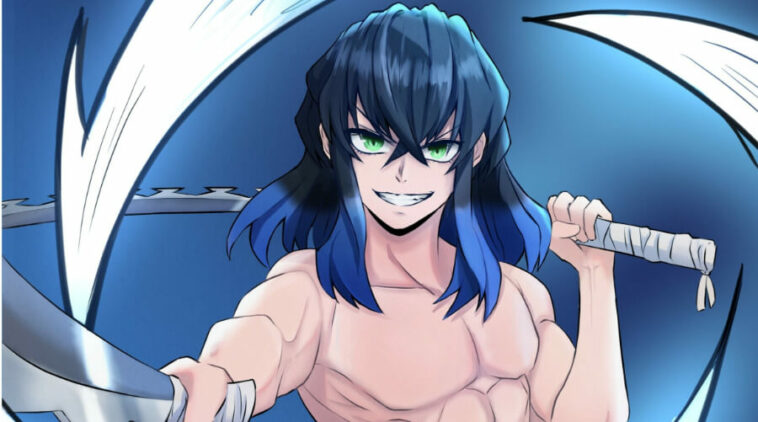 One of the main protagonists of Demon Slayer: Kimetsu no Yaiba in addition to Zenitsu Agatsuma is Inosuke Hashibira. He is also a traveling companion of Tanjiro Kamado and joins the Demon Slayer Corps.

Inosuke has an average height but toned and defined muscles over his stomach and arms. His face looks pale and tends to be feminine with dark to soft pale green eyes.

His most defining feature is that he wears a hollowed-out boar’s head. It lines up with the fact that he was raised by a boar.

Inosuke has high self-confidence because he always feels that he is the strongest among the others.

His ambition to be the best shows just how provocative he is, as he often tries to push others against him, though in the latter case he falls short of Tanjiro Kamado. He also has a somewhat vindictive character.

Inosuke has a self-made sword style Beast Breathing. His arch-nemesis was Doma, who’s murdering his mother.

With his ability, he was then able to destroy his nemesis Doma with the help of Kanao Tsuyuri during the raid on Muzan Kibutsuji’s Dimensional Infinity Fortress.

“Don’t cry even if you have regrets! No matter how pathetic or humiliated you feel, you still have to go on living!”

“Better to be careful! Because, ready or not, I’m coming!”

“The fate that unites us is truly a miracle. After all, the demon who killed… my mother and my friend… right before my eyes! You have my gratitude for making me remember. Cutting off your head won’t be enough!! I’ll send you to hell!!”

“If hell doesn’t exist, I’ll create it for you!! Enough of your bullshit!! Don’t say my mother was unhappy, kind of bastard!”

“You really did it now! And I’m not going to get up for that! They protected us! The old guy with the rosary has lost his leg! And the guy with the half-and-half haori lost his arm! All the bodies lying here belonged to comrades with whom I shared my meals! Give them back! Their leg and arm! Their lives! All! Give them back! If you can’t do that… Then you will pay him with a million dead! “

“We are comrades… and like brothers, then, if someone begins to stray from the path, we all stop him. No matter if it’s hard or painful, we walk the right path. “

Though Inosuke Hashibira is an extremely short-tempered person who always likes to think he is the strongest fighter, he’s praised for his skill.

At first, he seems very provocative, but then becomes more accustomed to affection and generosity, learning to also acknowledge the strength of people besides himself and develop feelings of friendship towards him.