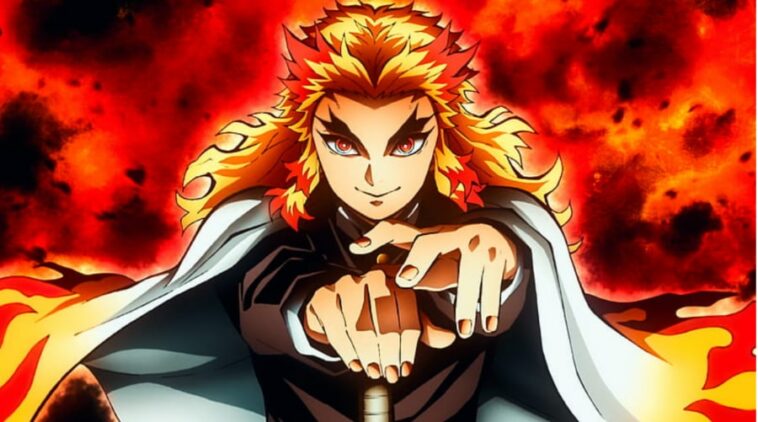 Kyojuro Rengoku was one of the main characters in Demon Slayer: Kimetsu no Yaiba and was the Pillar of Flame of the Demon Slayer Army.

Kyojuro is Shinjurou’s eldest son. Kyojuro Rengoku was born into the shinjuro rengoku clan, the pillar of fire.

He is tall and athletic. Though Kyojuro is a gentle and honest person, he is depicted as quite eccentric and tends to express his emotions easily.

Kyoujuro fulfills his duties as a demonic slayer and pillar with such passion. Kyojuro inherited his father’s discipline and ferocity through his schooling. Kyojuro is present with the other Pillars when Tanjiro Kamado wakes up.

Kyojuro is sent to investigate a series of brutal attacks in a small village, believing they are related to the incident surrounding the disappearance of forty passengers aboard the Infinity Train.

He meets another demon slayer in a ramen shop and they discuss their next plan of action. Kyojuro was dying, killed by Akaza.

He made his first appearance at the Assembly of Pillars, which decided the fate of Tanjiro and Nezuko Kamado and Guyu Tomioki after the events of Mount Natagumo.

“Life is a series of decisions. You never have unlimited options or unlimited time to think, but what you choose in that instant defines who you are.”

“However, if you bare your fangs at innocent people, my bright red flame blade will burn you to the bone!”

“And, Senjuro, you’re different from me! You have a big brother! And he believes in his little brother! Whatever path you walk you’ll be a great person! You have a burning passion in your heart! So let’s do our best! Let’s work hard in life! Even if we’re lonely”

“To think that all of this happened while I was dozing… How could this be? I’m ashamed as a Hashira. If only I could crawl under a rock”

“Growing old and dying is what gives meaning and beauty to the fleeting span of a human life. It’s precisely because we age and die that our lives have value and nobility. Strength is not a word that means much in regard to the flesh.”

“I will fulfill my duty! I won’t allow anyone here to die!”

“Go ahead and live with your head held high. No matter how devastated you may be by your own weakness or uselessness, set your heart ablaze. Grit your teeth and look straight ahead. Even if you stop and crouch down, time won’t wait for you or snuggle you and grieve along with you. Don’t feel bad that I’m going to die here. As a Hashira, of course I would shield my juniors.”

Though Kyojuro Rengoku was the dead character, he has a big role. He is respected and appreciated by all Hashira because of his constant positive attitude and passionate spirit. He is a fighter with principles and has a duty to protect the weak.