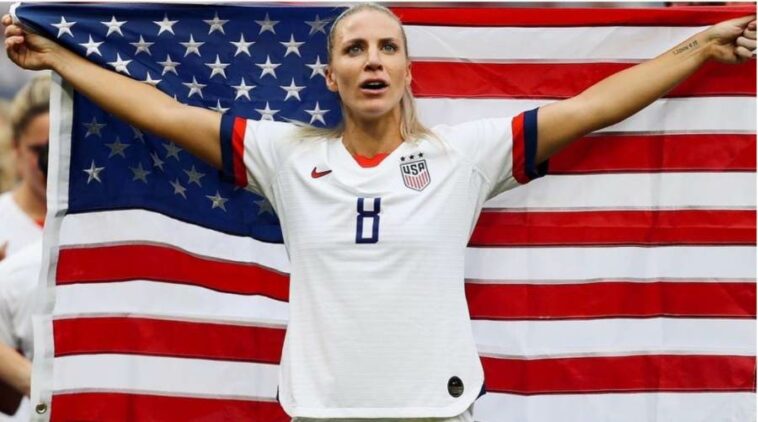 Julie Ertz knows football as she was introduced to football through her local American Youth Soccer Organization region. She and her sister Melanie join Sereno Soccer Club.

She played for Sereno Soccer Club from 2004 to 2010 and with the club, she won the state title nine times.

When she attended Dobson High School, she volunteered as a student athletic trainer for four years.

She enrolled at Santa Clara University and in college, she played as a midfielder for the Broncos women’s soccer team.

In 2014, she was selected to join Chicago Red Starts as the first round of the 2014 NWSL College Draft. She signed with the club for the 2014 season.

Her first appearance for the club was in the matches against Western New York Flash, where she scored the only goal in the 59th minutes.

Unfortunately, in the 2015 season, she missed almost half of the NWSL season due to her commitment with United States national team.

In the 2015 season, she appearances in 11 matches and played for 990 minutes. In the 2018 season, she couldn’t take part at the beginning of the 2018 NWSL season because she is recovering from an injury.

She stayed with Chicago Red Stars until 2021 before she was traded to Angel City FC ahead of the expansion draft.

Her international career began when she competed at the La Manga Tournament U-20 that was held in Spain.

She became United States captain in the 2012 U-20 FIFA Women’s World Cup and won the 2012 CONCACAF U-20 Women’s Championship.

“I love everything about football. You can learn so much from it, from leadership qualities to discipline. This sport involves every kind of emotion.”

“To see fans cheering your name, that’s shocking. I’m like, ‘Wait, how do you know who I am?’

“I would love to see myself as versatile – I think that’s important as a player – but I think, realistically, I feel like kind of how the team sees me is probably more set in stone as a center-back defender, which is totally fine.”

“The World Cup has been life-changing, for many reasons.”

“I found people that were willing to push me. I was like, ‘These are my goals. I need you to get me here.’ I don’t need any excuses. I won’t make any excuses. I’m over making excuses.”

“Everything happens for a reason, if you work hard for it.”

“Sometimes I just have a chance to go forward, so of course I try to make the most of it.”

“I didn’t want to go completely on my toes for our first kiss.”

“Pilates and yoga, we always do those together. But I think it’s a little bit easier for me, at 5-7, to be more flexible and to move a little better than him at 6-5.”

“I model myself on Christie Rampone and look up to her. Obviously, achieving what she’s achieved would be magnificent. I’d really like to meet her just once.”

“I would love to inspire our nation and continue the success of U.S. women’s soccer.”

Julie Ertz played for Chicago Red Starts and United States national team. While playing for both teams, she won United States Soccer Female Player of the Year in 2017 and 2019.