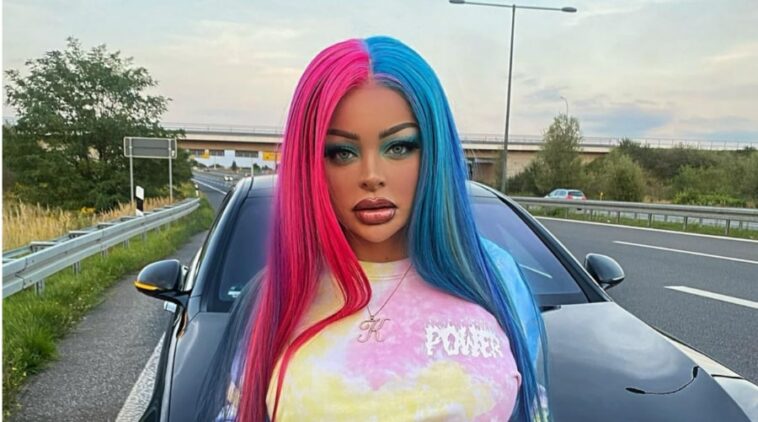 Katja Krasavice is a German singer, OnlyFans star, TikTok star, and YouTube star, who got popularity from social media.

She is best known for her self-titled channel on YouTube, where she gained massive followers by posting vlogs about tips, beauty, and daily life.

Katja Krasavice started her career at the age of seventeen. She made covered Miley Cyrus’ songs and uploaded them to YouTube.

Even though YouTube deleted these videos for legal reasons, she rose the fame because of her first video.

In April 2014, she posted her first YouTube and she has ranked on the list of famous peopleand she got massive views.

Later, Katrasavice released Doggy as her first single at the end of November 2017, placing 7th in the German single charts in the week of December 1, 2017.

On April 6, 2018, she continued her career as a singer by releasing her second song Dicke Lippen. Not far from that, she launched her third single followed in August 2018, entitled Sex Tape.

At the same time, In August 2018, Krasavice took part in the sixth season of Celebrity Big Brother, which led her to sixth place.

In July 2019, it announced that she got the opportunity signed to Warner Music. Her debut album, Boss Bitch was released on January 17, 2020, and reached many listeners on the German album charts.

Not only that, but she is also excited to model the industry. Thus, she joined the OnlyFans account to sell her premium photo and video.

In addition, she continued her career as a singer and YouTube star by collaborating with another content creator.

Thus, she made her songs and video music in 2022 entitled OnlyFans and You’re My Heart, You’re My Soul.

Katja is not dating anyone or having a special relationship. However, Krasavice had at least one relationship previously, but she kept her last boyfriend secret.

Katja’s net worth is estimated at around $1 million. Her income is mostly from her profession as a YouTube star, singer, and Onlyfans account.

Even though Katja got bullied when she was young, she dared to rise and prove her talent in the music industry – especially di YouTube and social media.