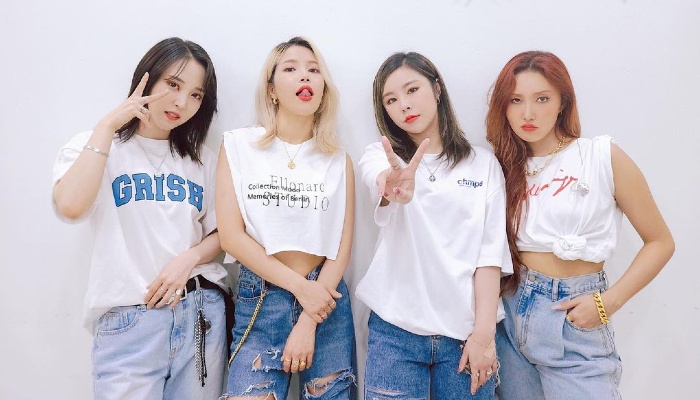 MAMAMOO started out as a girl group with four members. They are Moonbyul, Hwasa, Solar, and Wheein. This group is formed under RBW.

The name MAMAMOO comes from the sound babies make, Mama. In addition, the group’s name also has the meaning of approaching something instinctively and primitively like a baby.

Prior to their debut, the Kpop group had done some collaboration with several artists. On January 2014, the girls teamed up with Bumkey in releasing Don’t Be Happy.

Afterwards, they went on to work with K.Will releasing Peppermint Chocolate featuring Wheesung.

The song released on February 2014 proved to be a succes as it debuted at number 11 on the Gaon Digital Chart. MAMAMOO also released HeeHeeHaHeHo, a collaboration with rap duo Geeks.

On June 18, 2014, the group made their debut into the Korean music industry with the song Mr. Ambiguous. The song was part of their first EP Hello.

The debut was highly praised by critics and said to be one of the best debut in 2014.

Their R&B, jazz, and retro concept as well as their strong vocal performance gave them edge over their competitions.

MAMAMOO reached new high on their career with the release of their first full-length album Melting on February 2016.

The title track You’re the Best peaked on top of the Gaon Chart, earning MAMAMOO their first number 1.

It got them their first ever music show wins on Inkigayo. You’re the Best also won on Music Bank, M Countdown, and other music shows. In total the song got eight wins.

The success of Melting led them to a four mini album project series Four Seasons, Four Colors. The project was done to showcase each member’s characteristic.

The first of four mini album is titled Yellow Flower released on March 2018, focusing on member Hwasa and spring season.

The EP debuted on number 1 on Gaon Album Chart, becoming their first number 1 album since their debut. 3 other EP followed the release of Yellow Flower as part of the project.

The last EP from the series also earned a number one spot on the Gaon Album Chart. By April 2019, it had sold nearly 60.000 physical copies.

Other than making their way into the Korean music industry, MAMAMOO also focuses on breaking through the Japanese market.

They released the Japanese version of the 2016 single Décalcomanie for their debut in the foreign country.

It got over 9.000 copies sold and peaked at number 11 on the weekly Oricon Singles Chart.

MAMAMOO is truly a talented group with lots more to offer. Their future projects are for sure going to be exciting.