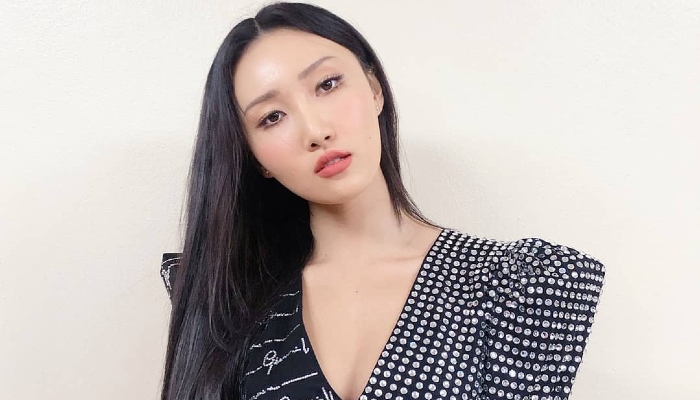 Hwasa started her career by debuting with MAMAMOO back in 2014 with the song Mr. Ambiguous. This debut was hailed by many critics as one of the best K-pop debuts of the year.

Hwasa is recognized for their strong vocal performance along with their great retro, jazz, and R&B concepts.

From the beginning, this youngest member of the group has shown her amazing talent in song writing and composing.

She wrote her first solo song My Heart/I Do Me for MAMAMOO’s first EP Hello. She then went on to produce another solo song called Be Calm for their sixth EP.

Hwasa released Twit in 2019. This marks her debut as solo artist. The song was a huge commercial success, scoring a Triple Crown by topping the Gaon Digital, Gaon Download and Gaon Streaming charts.

The girl born in Jeonju then followed this up by releasing her next single In The Fall.

Hwasa’s debut career really took off with the release of her EP Maria in June 2020. The EP topped the iTunes Album Chart in 20 countries, including United States.

Throughout her career, this foodie has also made several successful collaborations.

In 2018, she teamed up with rapper Loco for the song Don’t. While in 2020, she joined Dua Lipa for the remix of Physical.

1. Hwasa looking fierce in this sexy off the shoulder look

2. She can pull of any colors, including this soft cream one

3. She looks awesome even in just white t-shirt and jeans

4. Her piercing eyes give Hwasa her iconic look

5. Hwasa is not afraid to show off her body and experiment with fashion

Throughout her career, Hwasa is often criticized for not fitting in Korean’s beauty standard, especially the “cute Korean girl” prototype.

Instead of caving into the pressure, she has decided to stand tall and created her own beauty standard. She is definitely a great idol for young people to look up to.