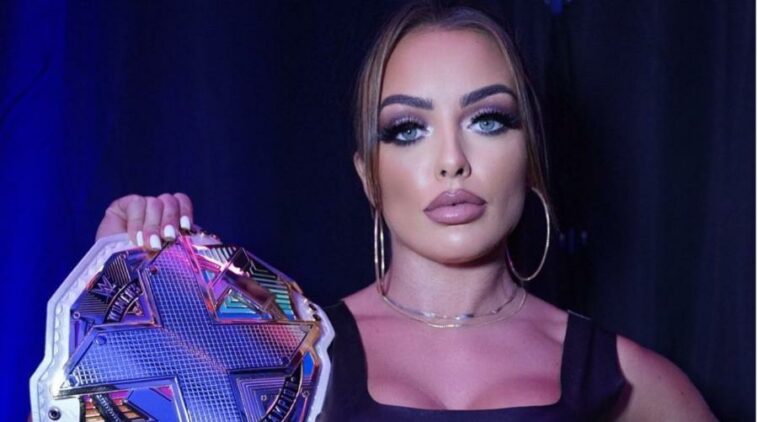 Mandy Rose is an American professional wrestler, and television personality. She is famous because of her career as a wrestler and her award as bikini Diva.

Mandy Rose joined World Wrestling Entertainment (WWE) after coming second on the WWE competition Tough Enough in 2015. It also marked her debut as a wrestler.

She signed a five year contract with WWE and makes her NXT debut in 2016. She was defeated by Ember Moon in her first NXT singles match.

Besides becoming a professional wrestler, she is also a take interest in fitness and has appeared multiple times in fitness publications such as Fit & Firm, Fitness Gurls, and FitFemme.

She was drafted to SmackDown in 2018 where she competes in several singles and tag team matches.

In the SmackDown Women’s Championship, she got the opportunity to face Asuka, but failed to capture the win.

In 2020, she was traded to the Raw Brand where she formed a tag team with Dana Brooke. Those two then competed in WrestleMania 37.

2021 marked the year when she returned to the NXT brand and formed an alliance with Gigi Dolin and Jacy Jayne where she also abandoned her blonde trademark and dyed her hair brown.

Mandy Rose’s relationship with Michael Lubic happened long ago. It was 2010 before she participated in Tough Enough.

Rose mentioned that her boyfriend was the one who encouraged her to take a career in wrestling as he was a big wrestling fan.

They dated for quite a long time and then engaged in 2016. However, months after they got engaged, the engagement was broken off.

It was when Mandy Rose joined Tough Enough that got her close to Sonya Deville. They became close friend in front of the camera and in real life.

Their closeness led people to speculate that they had romantic relationships. However, in an interview, Rose stated that it’s obviously just a rumor.

Mandy Rose started her on screen relationship with Otis that turned into a love triangle between Otis, her, and Dolph Ziggler.

The on screen relationship was rumored to happen in real life. However, the rumor was brushed off as at that time, Rose was dating Tino Sabbatelli.

Not long after calling off her engagement with Michael Lubic, Rose announced that she is in a relationship with Tino Sabbatelli.

Even though going public with the romance in 2018, however, they are quite secretive with their relationship.

Time after time, they began to disclose their relationship like their first met that happened when they were filming Tough Enough.

Mandy Rose’s net worth is around $15 million. Her incomes cames from salary from WWE, brand deals, and FanTime.

However, at the end of 2022, WWE fired Mandy Rose because of her NSFW content on her FanTime page.

Mandy Rose was once a famous OnlyFans star before she deleted the account. From her FanTime which is similar to OnlyFans, she could earn more than $307,000 in her first 24-hours in OnlyFans.

“You know my character, I’m obviously that sexy-hot bombshell that nobody else has.”

“My first love will always be fitness, so I want to share that with as many people as I can.”

“The reason I fell in love with fitness was because of the way I felt after a workout, even looking in the mirror afterward and feeling good about myself.”

“I’m always in front of the camera, always traveling and getting out of airports and skincare is very important to me.”

“I’ve been passionate about fitness my entire life, and the ability to compete for the ‘Tough Enough’ crown is truly rewarding.”

“I train five to six days a week, in developmental you’re training in the ring and in the gym, so that’s a crazy schedule. One you get to the main you’re on your own and you do what you want.”

“I always said, even in Developmental, ‘Yeah, I’m the beauty and all that. I’m the hot one, the sexy one – but I also have the brains and the strength to back it up.’ So, that was my biggest thing.”

“I am not only an athlete and sports entertainer, but also have a huge passion for fitness, beauty and fashion, so I am open to many different types of brands. When it comes to brands approaching me, I just need them to be very specific, to the point of what they want and need from me.”

“I’m the youngest of four kids, with three crazy older brothers. Don’t let this hair and face fool you – my brothers helped mold me into the feisty, tough woman I am today. I don’t stoop down to anyone. I was raised playing football and being the punching bag for my brothers. I guess you could say that is the root of my aggression and athleticism.”

Mandy Rose is a professional wrestler but more than that, she also takes an interest in fitness and even won in World Bodybuilding Fitness and Fashion Boston 2013.