Because of this, many things were shared and talked about by the film’s fans. One of them is Ron Swason character who has a very flat and stereotypical masculine personality, actively works to make the government less effective, and hates interaction with the public.

He loved meat, woodworking, hunting, Lagavulin whiskey, breakfast food, nautical literature, and sex. Ron claims to be uninterested in the private lives of the people around him, but actually cares deeply about his colleagues. This is what makes Ron’s character so well-liked.

His portrayal of Ron Swanson has received widespread critical acclaim. The characters develop a cult following and are widely considered to be the runaway characters from the series.

He has been described by some critics as one of the best sitcom characters in decades, and has been called the best comedy character on television.

Here’s a lot we can learn together from Ron Swason funny, entertaining and inspiring character about life.

Here are 100 Ron Swanson quotes that are funny and entertaining for all of us from the best comedic Ron ever.

Read also: 100 Tupac Quotes The Rapper Inspires Us All About Life

Ron Swanson Quotes Give Me Funny Things After To Read 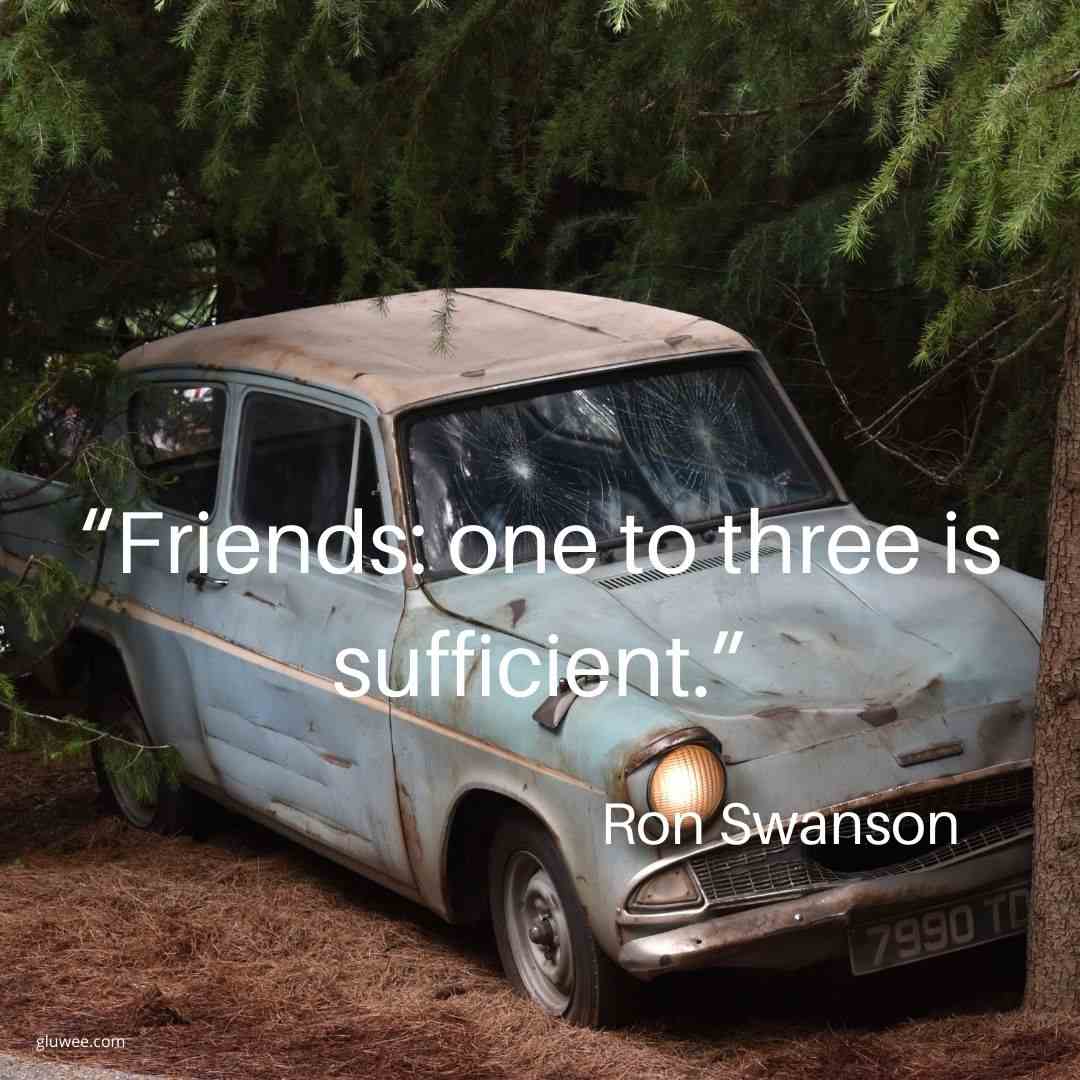 3. “Creativity is for people with glasses who like to lie.”

6. “We have one activity planned: not getting killed.”

7. “Everything I do is the attitude of an award winner because I’ve won an award.”

8. “Keep your tears in your eyes where they belong.”

9. “I said that you’ll get a lot of job offers in your life but you only have one hometown.”

11. Food – the only thing capable of bring out Ron Swanson’s human side. Let’s see some great food quotes from him.

13. “Fishing relaxes me. It’s like yoga, except I still get to kill something.”

14. “I can’t think of anything more noble to go to war over than bacon and eggs.”

15. “Veganism is the sad result of a morally corrupt mind. Reconsider your life.”

16. “Barbecues should be about one thing: good shared meat.”

17. “I work hard to make sure my department is as small and as ineffective as possible.”

19. “I am submitting this menu from a Pawnee institution, J.J.’s Diner. Home of the world’s best breakfast dish: The Four Horsemeals of the Eggporkalypse.”

20. “Encapsulate the spirit of melancholy. Easy. Boom, a sad desk. Boom, sad wall. It’s art. Anything is anything.” 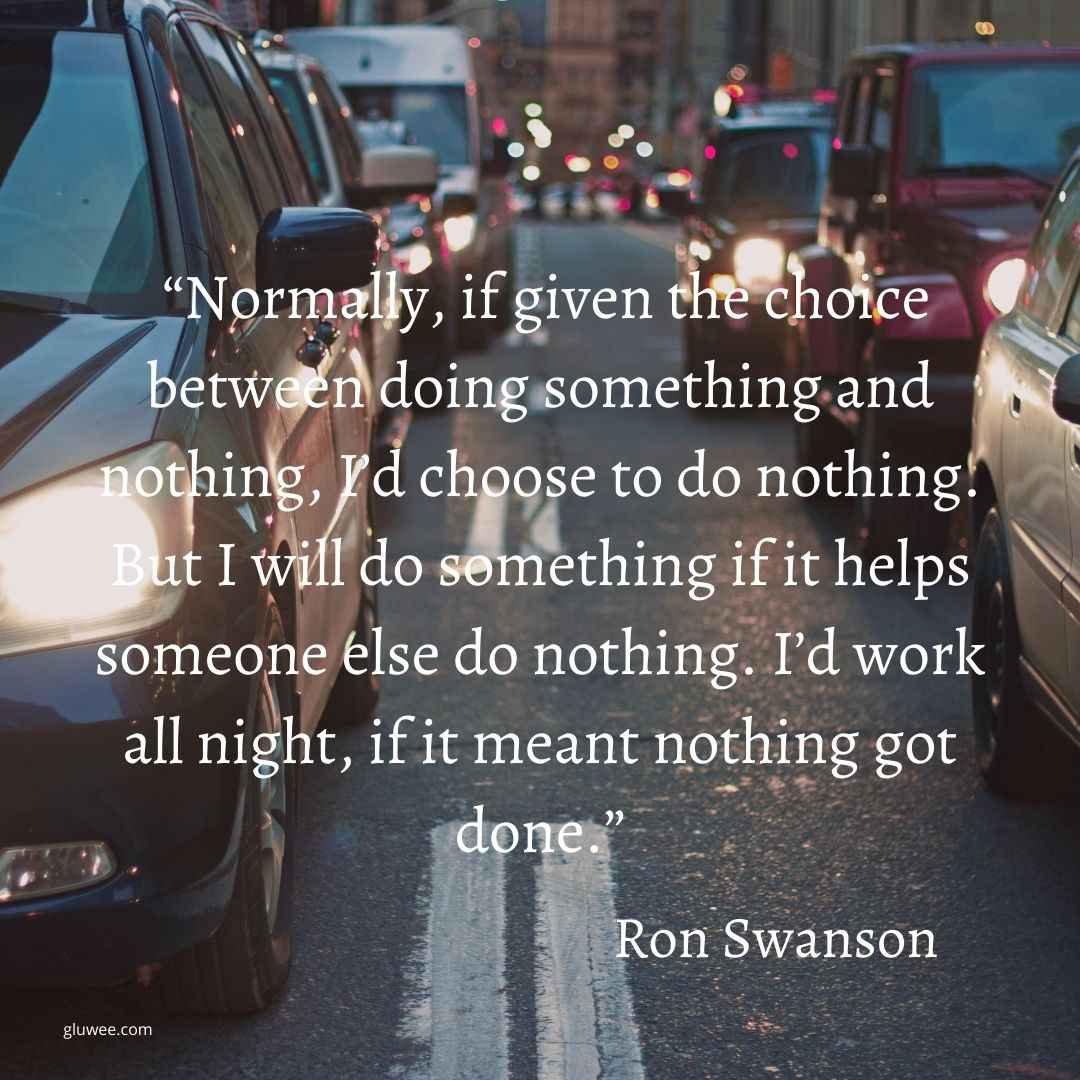 21. “Listen, I’ve eaten a commissary hamburger for lunch every day for twelve years. I just wanted to make sure this pointless health crusade won’t affect the only part of my job that I like.”

22.”This is a flying robot that I just shot out of the sky when it tried to deliver me a package.”

24.”In my opinion, not enough people have looked their dinner in the eyes and considered the circle of life.”

25.” We will get along just fine, though hopefully not too fine, because I am not looking for any new friends. End speech.”

27. “Creativity is for people with glasses who like to lie.”

28. “Say what you want about organized religion, but those bastards knew how to construct an edifice.”

29. ” Live your life how you want, but don’t confuse drama with happiness.”

30. “On nights like this when the cold winds blow, the air is awash in the swirling eddies of our dream, come with me and find safe haven in a warm bathtub full of my jazz.”

31. “My son is several weeks old. He is very familiar with the sound of power tools.”

33. “My name is Ron Swanson. I’m going to tell you everything you need to know about the miserable screwed up world of local government.”

34. “Under my tutelage you will grow from boys to men, from men into gladiators, from gladiators into Swansons.”

37. “The only reason anyone is going to this thing is because they’re afraid of what Marlene will do to them if they don’t. That women is tough. In 1994 I gave her a nickname, it’s unrepeatable, but it stuck. It’s my proudest accomplishment. It’s the iron c*ck shredder of Pawnee.”

38. “There are only three ways to motivate people: money, fear, and hunger.”

39. Talking about an IPod: “Tom put all my records into this resctangle. the songsn just play one after the one. this is an excellent rectangle.” 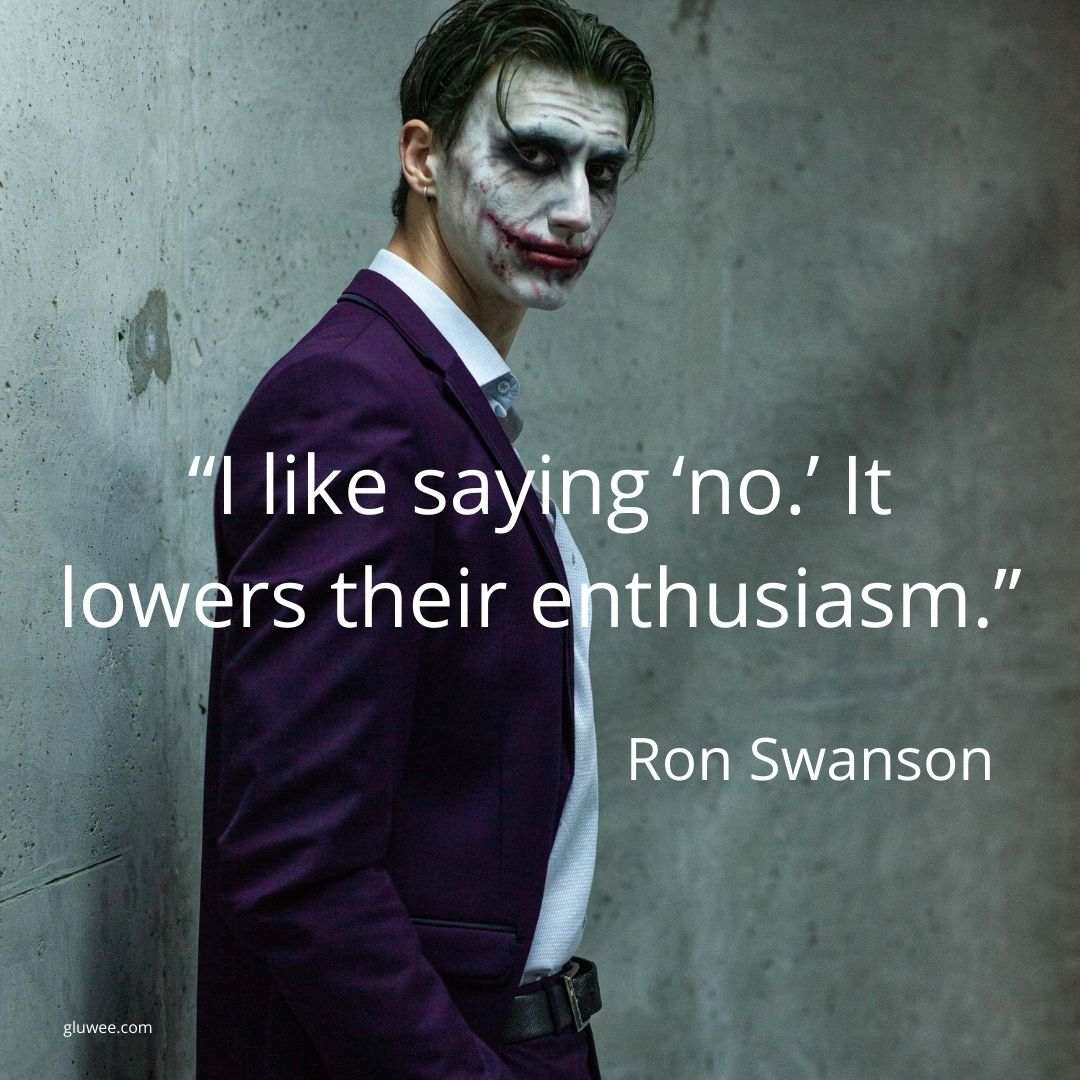 41. “Clear alcohols are for rich women on diets.”

42. “Crying: Acceptable at funerals and the Grand Canyon.”

44. “There are only three ways to motivate people: money, fear, and hunger.”

45. “The key to burning an ex-wife effigy is to dip it in paraffin wax and then toss the flaming bottle of isopropyl alcohol from a safe distance. Do not stand too close when you light an ex-wife effigy.”

46. “Under my tutelage, you will grow from boys to men. From men into gladiators. And from gladiators into Swansons.”

47. “Swanson method, where you close your eyes and fall asleep.”

48. “Literally everything is a weapon, son. That folder, in my hands, is far deadlier than this bow in yours.”

51. “I’ve heavily invested in gold which I’ve buried in several different locations around Pawnee. Or have I?”

52. “I will leave my children $50 apiece for the cab home from my funeral and a steak dinner, end of discussion.”

53. “I won’t be hiring an attorney. I’ll represent myself, as I do in all legal matters and livestock auctions.”

54. “We can’t have raccoons for the Christmas thing. They’ll hunt the kids for sport.”

55. “Every two weeks I need to sand down my toe nails. They’re too strong for clippers.”

56. “I feel I should remind you that I do not believe that the position or the entire government should exist.”

57. “My idea of a perfect government is one guy who sits in a small room at a desk, and the only thing he’s allowed to decide is who to nuke.”

59. “The government should not prop up a failed business. That would be like giving food to a mortally wounded animal instead of slitting its throat and properly utilizing its meat and pelt.”

60. “Government is inefficient and should be dissolved.”

61. “I was going to ask you for a job. In the federal government – even saying it feels dirty.”

66. “Capitalism: God’s way of determining who is smart, and who is poor.”

71. “Strippers do nothing for me…but I will take a free breakfast buffet anytime, anyplace.”

72. “No home is complete without a proper toolbox. Here’s April and Andy’s: A hammer, a half-eaten pretzel, a baseball card, some cartridge that says Sonic and Hedgehog, a scissor half, a flashlight filled with jellybeans.”

74. “If any of you need anything at all, too bad. Deal with your problems yourselves, like adults.”

76. “Welcome to ‘Visions of Nature.’ This room has several paintings in it. Some are big, some are small. People did them and they’re here now. I believe that after this is over, they’ll be hung in government buildings. Why the government is involved in an art show is beyond me. I also think it’s pointless for a human to paint scenes of nature when they could just go outside and stand in it. Anyway, please do not misinterpret the fact that I am talking right now as genuine interest in art and attempt to discuss it with me further. End of speech.”

77. “Do you have any history of mental illness in your family? I have an uncle who does yoga.”

78.”Busy? Impossible. I work for the government.”

79. “I’ve cried twice in my life. Once when I was 7 and hit by a school bus. And then again when I heard that Li’l Sebastian had passed.”

80.” There has never been a sadness that can’t been cured by breakfast food.” 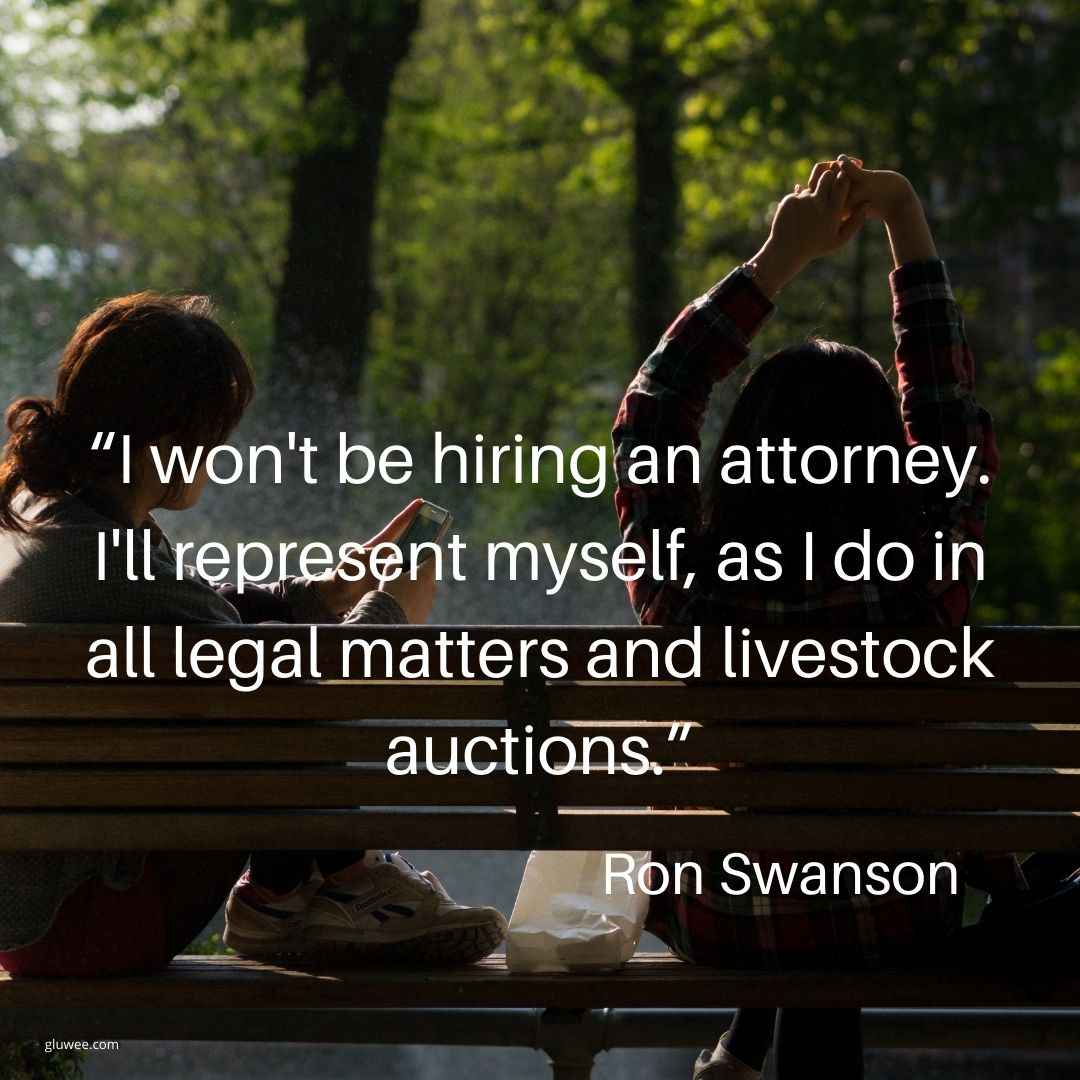 81. “There’s only one thing I hate more than lying: skim milk. Which is water that is lying about being milk.”

82. “Normally, if given the choice between doing something and nothing, I’d choose to do nothing. But I will do something if it helps someone else do nothing. I’d work all night, if it meant nothing got done.”

84. “Any dog under fifty pounds is a cat and cats are useless.”

87. “Breakfast food can serve many purposes.”

88. “I’d wish you the best of luck but I believe luck is a concept created by the weak to explain their failures.”

89. “Dear frozen yogurt, you are the celery of desserts. Be ice cream or be nothing. Zero stars.”

90. “Great job, everyone. The reception will be held in each of our individual houses, alone.”

91. “On my deathbed, my final wish is to have my ex-wives rush to my side so I can use my dying breath to tell them both to go to hell one last time.”

92. “I’ve created this office as a symbol of how I feel about government. This sawed-off shotgun belonged to a local bootlegger. People who come in here to ask me for things have to stare right down the barrel…”

93. “I love being a father but there are a few things I miss: Silence. The absence of noise. One single moment undisturbed by the sounds of a children’s program called Doc McStuffins. There is no quiet anymore. There is only Doc McStuffins.”

94. “I have accrued two hundred and twenty five personal days starting right now I’m using all of them. While I’m gone your in charge. Also, I keep a sizable supply of ground chuck in my desk. Remove it or it will begin to smell. Godspeed.”

96. “I have a hernia. I’ve had it for a while, and I’ve been ignoring it successfully. But uh, this morning, I made the mistake of sneezing. But as long as I sit still and don’t move my head or torso, I’m good. I got this.”

97. “Passing the Buck. The last refuge of the cowardly and Blackhearted.”

98. “An ideal night out, to me, is stepping onto my porch area and grilling up a thick slab of something’s flesh and then popping in a highlight real from the WNBA.”

99. “Fishing relaxes me. It’s like yoga, except I still get to kill something.”

100. “My idea of a perfect government is one guy who sits in a small room at a desk, and the only thing he’s allowed to decide is who to nuke. The man is chosen based on some kind of IQ test, and maybe also a physical tournament, like a decathlon. And women are brought to him, maybe…when he desires them.”

Read also: 100 George Carlin Quotes Looks At The Humorous Side For All

That’s it, 100 Ron Swanson quotes that can be learned and inspired for us all to see Ron Swanson’s figure in films and the world of comedy.