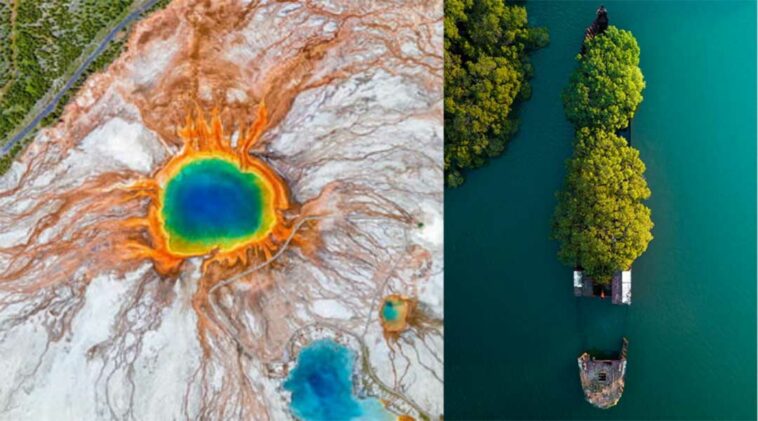 Google earth helps us understand our home, earth. It captures everything, from our house, our office, or even the weird thing.

From an aesthetic garden to a strange shape (known as military based), google earth shows us everything.

Not all the strange shape is something unexplained and become a mystery, some of them has a meaning and purpose.

Read also: 10 Kitchen Nightmare Restaurants That You Can Visit

1. Guitar shaped garden founded in Argentina. This garden is planted by Pedro Martin to remember his wife

2. This aesthetic blue ceramic look-a-like is a human made potassium ponds located in Utah. This pond used for isolating salt for containing potassium

3. From google earth, this wrecked ship seen in Basra Iraq. The other side of a ship is under the river

4. Whose lip is this? Not us! Because it’s not human lips. This desert shaped lips is spotted on google earth in Arawala Sudan. The black dots around the “lips” is a trees

5. Strange pattern is seen at Gobi Desert China. Many says, that location is a secret military basecamp

6. This plane radar is seen on google earth as a memoriam of UTA flight 772 incident which explode over Sahara desert

7. This beautiful colour captured on google earth is The Grand Prismatic Spring in Wyoming

8. Is that in Gotham City Police Office? Or Bruce Wayne house? No. It’s Batman logo is located in Okinawa Japan. It’s a US Air Force’s  44th Fighter Squadron’s Kadena Air Base in Okinawa. The symbol is painted there since 1980

10. Another sinking ship that seen on google earth is Costa Concordia shipwerck. This accident is located in Tyrrhenian Sea near Italy

11. These trees is grown in unusual place. Not on land! It’s on a shipwreck! Google earth snaps it like a forest upon a water

Nowadays, some image on google earth is photoshoped and become a hoax. So, before we share it, recheck it.