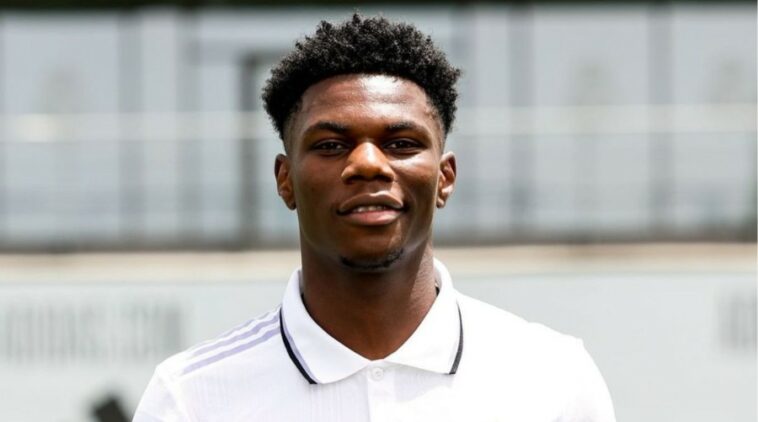 Aurelien Tchouameni had a dream to pursue the same dream his father had. He grew up as the son of a footballer who pushed hard to earn a professional contract.

He began his football journey in SJ Artigues, an academy in his neighborhood. His ability grew while he was in the academy.

It was the time when Bordeaux began to notice him and invited him to take a trial. He was 11 when he passed the trial at Bordeaux Academy.

In 2018, he graduated from Bordeaux Academy and joined the club’s senior side. He makes his debut in the matches in the UEFA Europa League against FK Ventspils.

After making an impression in Bordeaux, he moves to a bigger club, AS Monaco in 2020. He signed a four year contract with Monaco.

He spent two years in Monaco, then transferred to Real Madrid and signed a six year contract with Real Madrid.

His first matches for France’s senior squad were in 2021 at the 2022 World Cup qualifying game against Bosnia and Herzegovina.

“When I start something, I try to be the best I can be. I aspire to be one of the best players in Europe in my position. So I work every day to achieve this goal”

“PSG or Real Madrid? When I discovered Real Madrid wanted me I told my agent I wanted Madrid. They have always been my first choice. It’s a dream to be here.”

“Perhaps I could have more guaranteed minutes elsewhere. But this is Real Madrid. This is the challenge.”

“Being focused on what you can control is very important and it helps me a lot.”

“I had spoken with other teams but a part of me was always waiting for the call from Real Madrid”.

“I told the President to make the trophy room bigger, we have more to win.”

“I also write down my goals for each match, depending on our opponent or the context.”

“I try to jot down a bit of everything. I have quotes from top athletes or great personalities in the world. Quotes that are inspiring to me, and with which I feed myself.”

“It’s a real point of progress once again, because when you have a yellow card at the start of the match, you have to adjust your game until the end to allow your team to win and maintain a high level of performance.”

“Now, having the opportunity to compete in a World Cup with the senior side is obviously something I have in the back of my mind. But there are still plenty of matches that will happen before this World Cup, so we are thinking about it, but not too much.”

His dad had a dream to became professional footballer. Though his dad failed to secure professional contract, but it’s inspire him as he follow his dad to the field everyday.