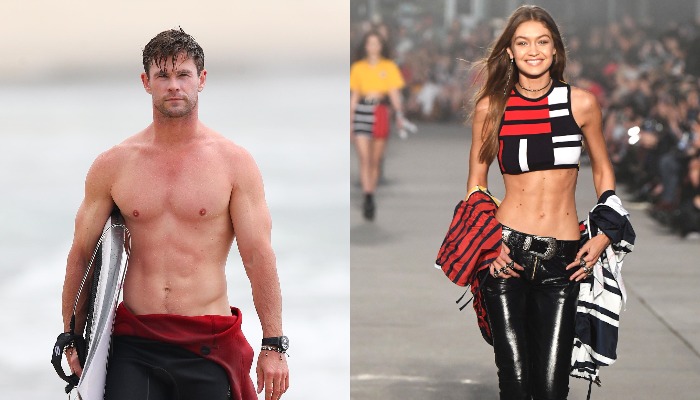 People really work hard to get healthy and a great body. They workout at the gym and maintain their food and beverages.

This matter is one of the more crucial things for celebrities, since they need to fulfill the needs of the producer or a person they work with.

To have an abs on their bodies, a star should regularly do a fitness or even eat only a food which is suggested by the doctor.

During this time, they have to be disciplined to do a daily routine activity, especially to get a perfect six pack.

So, here are 9 pictures of Hollywood stars with their six pack bodies.

1. Chris Hemsworth has a great six pack. He workout with push up, pull up, sit up, front box jump and squat. Then, he always chooses healthy food for his body

2. Chris Evans also does a workout and diet. He keeps his calories and protein in the same balance every day

4. Gigi Hadid is a great woman who has a beautiful six pack in her body. During her runway, Gigi exposes her abs with a lovely smile

5. Ryan Gosling also has an awesome muscular body. He eats fish for protein, brown rice for energy and green vegetables

6. Reynolds has perfect six pack body. He chooses a simple workout and does and outdoor activity to keep his body healthy

7. Shawn Mendes focuses on his body. He does a treadmill as well as body training program

8. Taylor Hill showed up her beautiful abs during runway in Victoria Secret 2018

9. Zac Efron has a six pack like a superman. He divides his workout into three days. It won’t be a big question of why he has such a great body

Having a six pack is not an easy thing. They have to work hard and discipline during the process. How about you? Do you have a special body training program to keep your body healthy?.