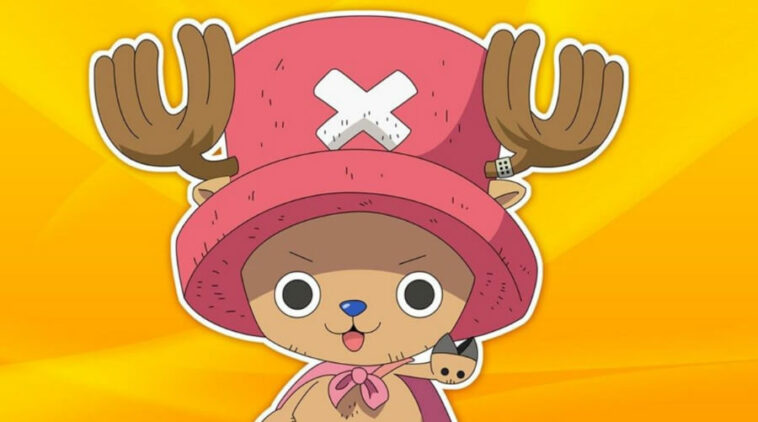 Chopper, also known by his real name Tony Tony Chopper is one of the Straw Hat Pirates crew in the manga and anime One Piece. He is also known as Cotton Candy Lover due to his love of candy.

He is a reindeer that ate Devil Fruit Hito Hito no Mi that allows it’s user to transform into human hybrid or even to human.

Chopper has a role as a doctor for the Straw Hat Pirates. He dreamt of becoming a doctor capable of curing any disease, and he traveled the world in hopes of accomplishing his dream.

He is a reindeer with a toddler-size human. His trademark appearance is his large pale pink fuzzy top hat with the medical cross on the sideways.

He wears maroon shorts and sometimes wears a blue backpack that has the same medical cross like in his hat.

His nose is blue and his head is large with eyes that he is defined as a cute character that the female crew of Straw Hat Pirates like. Most of the time, he wore the same outfit throughout the series.

He once wore a green-lined collar shirt or giant sleeves with light blue and dark blue liners.

Because he is the youngest on the crew, Chopper often act like a child and he is extremely timid, especially to unfamiliar humans. He has a lack of trust in his own fighting skills and would rather run and hide than fight.

But with the support of others, he became more courageous, and saw his crewmate as a role mode. Chopper is the most emotional one on the crew and the one who considers them as family the most.

His timid personality grew into more confident after the time skip and he grew more mature to the point he was able to smack his crewmate when the about to do something stupid.

“My name is Tony Tony Chopper! It was given to me by the greatest doctor in the world!”

“I’m not some kind of prey animal!”

“I won…? Against the Seven Warlords of the Sea?! I’m amazing!”

“Bastard! I’m not losing this!”

“Robin is a part of our crew! I’m going to give it to anyone who hurts my crew!”

“I realized that back then, the reason I wanted to become human, was that I really just wanted to have friends. Now, I just want to be a monster that can help Luffy.”

“Bastard! I’m not losing this!”

“I’m neither a human nor a reindeer, I’m a one of a kind pirate warrior!”

“If I can help my crew, I want to become a real monster!”

Chopper’s cute appearance makes him the favorite of the female Straw Hat Pirates crew. But behind his cute demeanor, he is powerful and dangerous in the battle, even though he prefer run and hide than fights.