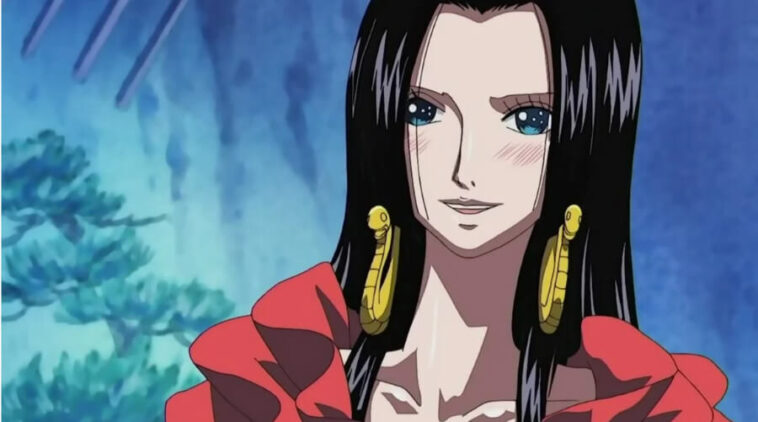 Boa Hancock is Pirate Empress of Amazon Lily in the manga and anime One Piece. She is the captain of the Kuja Pirates and the only female Warlord of the Sea before the disbandment.

She once the main antagonist in the Amazon Lily Arc before falling in love with Luffy and befriend him.

She has a well-proportioned body that is tall and slender, with long black hair that passes her waist and pale skin.

Her eyes are dark brown, dark blue pre-time skip before changing to black after time skip. She has long and voluminous eyelash. She has a slim figure with a large breast.

Her physical appearance makes her the most beautiful woman in the world.

She wore different outfits the entire times. Sometimes she wore a red V-neck blouse that showed her chest and a loose sarong that showed her slender legs along with a green symbol of the Kuja adorned.

She also wore white cape sporting epaulettes that common in the jacket of high-ranking Marine. She also wore red high heel pumps. She also ever wore a qipao with a headed cloak.

At first, she seems like a selfish, spoiled person who used to have her own way. She could act cruel and arrogant. But she is a complex woman.

When Luffy is shown immunity to her charm, she becomes deeply in love with Luffy and tries several ways to propose Luffy.

On several occasion, she showed her sensitive and vulnerable side, especially the fear of people finding out about her shameful past.

“I am Empress Boa Hancock! To oppose me is to die!”

“Whether I kick a kitten… Tear off your ears… Even slaughter innocent people… The world will never cease to forgive my actions! Why, you ask? That’s right, it is because I am… Beautiful!!!”

“The beauty that a thousand men have bowed down to. In my own way, I’m a One Man Army.”

“Your hearts that have fallen for me, will harden your bodies…”

“It seems the enemy ran in shame… I know why. It’s because I’m beautiful!”

“To me, there is no such thing as gods and men. Because… I’m beautiful.”

“Men are all talk… They make me laugh.”

“You must either kneel in my presence, or be turned to stone. It’s your choice.”

“I will not be controlled by anyone anymore… Surely you all understand.”

“You insolent fools! Get out of my way.”

“Know that you will turn to stone upon entering here!”

“I’ll tell you guys something good. “Love is always like a hurricane”!”

“Ahh… Even the pain of a thousand cannot match the ache of my heart.”

“Let’s get this started, You want to bore me?”

Became the most beautiful woman in the world, Boa Hancock often looks at people who are beneath her, especially men, with disrespect.

But aside from her beauty, she also has powerful ability as the captain of Kuja Pirates and the only female Warlord.