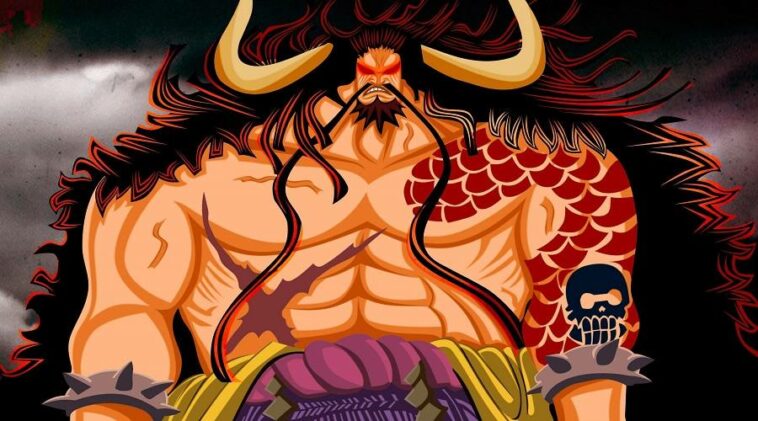 Kaido is the Governor General of the Beast Pirates in the manga and anime One Piece. Known as Kaidou of the Beast, he is the world’s Strongest Creature.

Kaido is the antagonist in One Piece world and is once defeated by Luffy. He initially one of the Four Emperor that ruling over the New World, but after Luffy defeated him, the world economy news paper released a new listing of Four Emperor without Kaido in it.

Kaido is a middle aged man with extreme height. His height up to 710 cm or 23′. He is overly top heavy in build and bulky in muscles. He has a wide set shoulder and thick arms.

His legs somewhat out of proportion and much tinier than his hands. He has a massive pair of gray-white sharp pointed horns coming out of the sides of his head.

His face is mostly seen frowning with a full lipped mouth and a hook nose. He has a longish face with a heavy and hairless brow ridge.

Kaido wears a blue-purple feathered sleeveless on his shoulder with a lavender, tight-fitting open short with long sleeves. He has a black bracelet with golden spikes on each wrist.

He is known for his mercilessness and aggressiveness. He is a confident warrior who doesn’t want to miss an opportunity to gain advantage in war.

“I’m still alive. I guess that won’t work either…”

“You wanna execute me? It’s pointless even trying.”

“No wonder you have trouble executing people. Cowards!”

“You’re getting on my nerves. Shut up!”

“If you’re blaming someone, blame yourself for being so weak.”

“That generation… I’m not going along with your childish games!”

“I made you Headliners… but you’re just kids.”

“What were you expecting?!”

Kaido is life to his name as the Strongest Creature because of how unbeatable he is.

He likes to recruit people who are powerful and put them in prison if they decline his offer. He often goes around drunk even when he is on the battle.