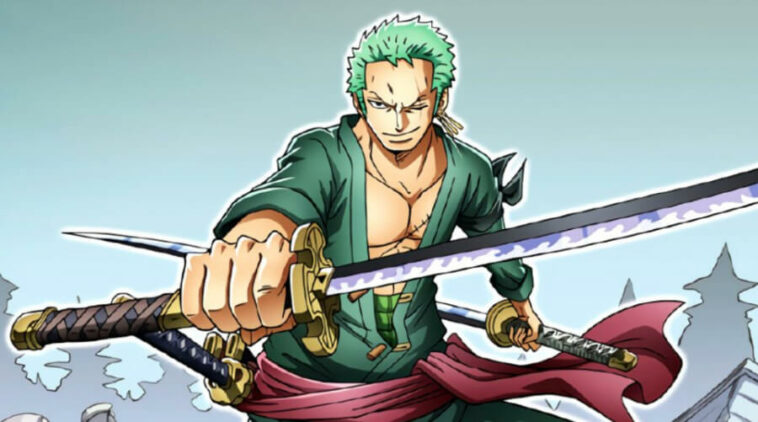 Roronoa Zoro is the protagonist in One Piece. He is the first member to join Luffy in Straw Hat Pirates. His dream is to become the greatest swordsman in the world.

Always carries his three swords with him, Zoro is a muscular man of average height with tan skin. His body is full of scars from his battle.

His visible scars are the scars on his ankles that he got when he tried to free himself at Little Garden. He also got a scar on his left eye after the time skip, with no explanation of what it means.

He has green-chopped hair and always keeps a black bandana tied around his left bicep and his head whenever he fights against his opponent.

But aside from the same outfit, he also once wore an open navy blue shirt that he stole from the fish men.

As a former bounty hunter, he is intimidating and easily frightening others from only his glare. He shows no mercy during combat and appears as serious and has a distanced personality.

But he could lose his temper in a goofy and comical style. He also has a kind heart, as he could risk himself to save a little girl he didn’t know before.

He has strong leadership and reasoning but still stands by Luffy’s decision no matter what only disagrees once in a while, especially if he needed to point out the seriousness of the situation that has been overlooked by the crew.

“Only those who have suffered long, can see the light within the shadows.”

“It’s okay to lose your way… just don’t lose sight of what you have decided.”

“What does ‘teamwork’ really mean, anyway? Is it just about rescuing or protecting each other? There are people who believe that. But to me, it just sounds like kids playing around.”

“In a real fight there is no man or woman! If you don’t fight with your real power, that will be the most shameful thing.”

“Hmph. Aren’t titles useless when it comes to fighting? The stronger one wins, that’s all.”

“How did I end up following a captain like this?”

“A crew with no respect and a captain that doesn’t demand it falls apart quickly.”

“My captain has no business with a chunk of stone like you. Suck it up and just deal with me instead”

Roronoa Zoro is Luffy’s right hand and one strongest crew in Straw Hat Pirates. He has strong combat skills and is willing to risk himself to protect his captain and his crew.

He has a strong principle, and his good reasoning often helps the crew.